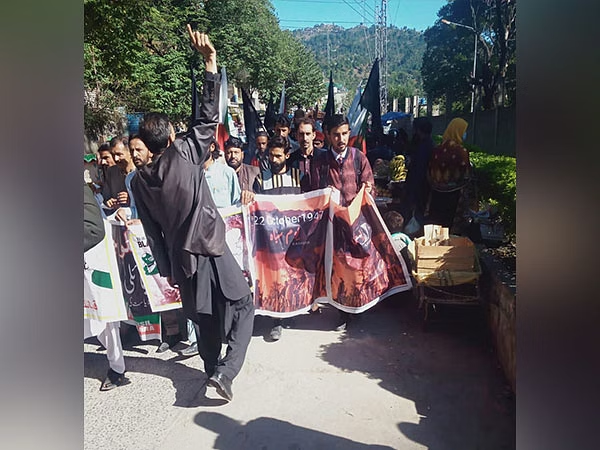 The people of PoK led by political activists like Asad Nawaz and Abid Shaheen from the Jammu Kashmir National Awami Party (JKNAP), along with leaders from other regional parties organized demonstrations in Bagh, Ajira, Rawalakot, and Pindi.

October 22 is observed as the Pak Army-backed Tribal invasion in Jammu and Kashmir in 1947. The intervening night of October 21-22, 1947 is considered the “Black Day” in the history of JK, which left a grim mark on the fate of the region.

The tribal invasion of October 22, known as Operation Gulmarg, resulted in the death of thousands of innocent people and changed the course of Jammu and Kashmir’s history. United Kashmir People’s National Party (UKPNP) organized protests in PoK and other parts of the world to mark Oct 22 as “Black Day.”

Protests were held around the world against the tribal invasion, looting, and massacre of state residents on October 22, 1947, which is the basis for the partition of the state of Jammu and Kashmir.

Demonstrations were held worldwide, including the capital Muzaffarabad, in Europe, Britain, the United States and North America.

In a memorandum released on Saturday, the United Kashmir People’s National Party said it wants to declare “that the erstwhile State of Jammu and Kashmir is one political entity; and its unification, stability, prosperity and autonomy is our ultimate goal.”

“Affirm that people of the State of Jammu and Kashmir have been victims of aggression, extremism and violence since 1947. They are forcibly divided and continue to suffer under the illegal occupation of Pakistan. This forced division and suffering must come to an end, as people of Pakistani Occupied regions i.e. so-called Azad Jammu & Kashmir and Gilgit-Baltistan deserve to enjoy their fundamental human rights including the right to rule in their territory,” the party said.