Why is drug abuse in Kashmir skyrocketing among the youth? 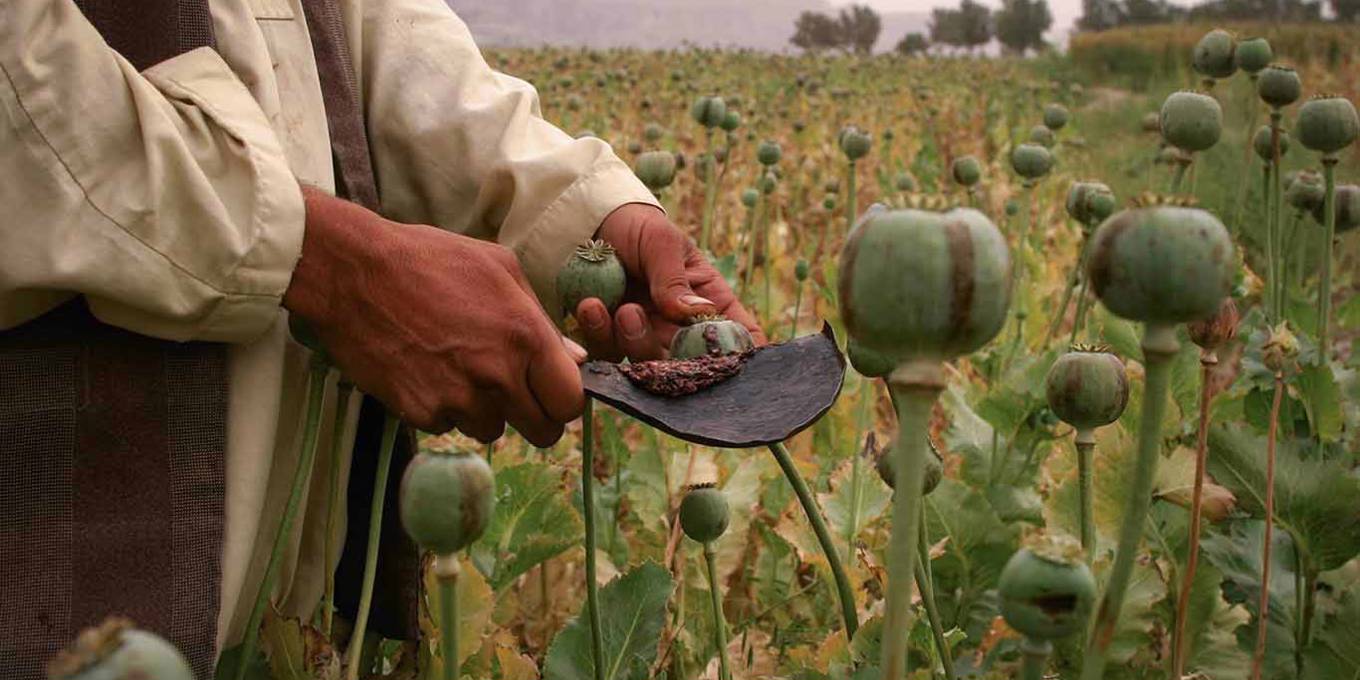 It was the summer of 2016. Hizbul Mujahideen commander Burhan Wani had been dead for some time, but protests in Kashmir swelled with each passing day. The scarred faces of Kashmiri men, women and children littered news spaces worldwide, furnishing grim proof of the repression with which the mourners of the young insurgent had been met. “The pellets rushed in all directions, like a torrent of lava,” recalled Jehangir (name changed to protect identity). “It didn’t hit only the protesters. It hit everyone.”

Being stuck in Kashmir at that time was to be stuck in a relentless nightmare. A vicious cycle of injuries and death. Helplessness. Fear of the pellet guns, ironically called “non-lethal” but able to blind people who were hit in the eye.

There was a great felt need to transmute and forget the personal and collective pain. Jehangir, then an eighth grader at a higher secondary school in Palhallan in north Kashmir, hated the direction his life had taken and wished he could change it. When a couple of friends told him about cannabis and its power to blur the distinction between the real and the imagined worlds, he initially rebuffed them. But as hartals continued and forlorn afternoons became impossible to pass in solitary confinement, he succumbed to temptation.

Today, as Kashmiri society see-saws between denial and acknowledgement, the drug menace, say experts, is assuming frightening proportions in the restive Himalayan region. Consignments make their way from across the border swiftly and often go undetected. There is overwhelming suspicion of complicity of the police and even of the Army, but this is next to impossible to prove.

A recent report by the National Drug Dependence Treatment Centre in AIIMS revealed that over six lakh people in Jammu and Kashmir are victims of drug abuse. The patient-intake records at the Institute of Mental Health and Neurosciences (IMHANS) Srinagar, a premium rehab facility, attests to the problem’s spiralling nature. While 489 drug abusers reported into the facility in 2016, the number grew exponentially to 7,420 in 2019. In 2020, it dropped to 3,536, but that is attributed to the COVID-19 lockdown. Ninety per cent of the drug users are in the 17-33 age group.

Jehangir, who underwent treatment at a rehabilitation facility in Srinagar between 2019 and 2020, described his experience as a cycle of acute guilt followed by recurring trauma for which cannabis seemed the only remedy. “We plucked flowers from ‘charas’ plants, rubbed them between our palms, mixed them with cigarettes and smoked up.” Then, with some hesitation, he admitted, “My friends were right. It instantly de-stressed me.” It did not take him long to become addicted and when, a couple of months later, the charas cultivation season was over, he and his friends frantically searched for peddlers and eventually found them in adjoining Zaspora and Nehalpora villages.

There seems to be a firmly entrenched corridor for illegally routing drugs from Pakistan to Kashmir and from there to the rest of India, prompting political observers to coin the term “narco-terrorism”. Interactions with a handful of officials in the security apparatus and researchers tracking the drug menace in Kashmir gives one the sense that Keran village in Kupwara in the northern tip of the Himalayan valley serves as the conduit for drug racketeers. From Keran, the consignments reach Rajouri border and then Jammu, from there they travel to the Indian mainland.

There are frequent seizures of consignments coming from Pakistan. According to Jammu and Kashmir police data, 36.08 kilograms of pure heroin and 49.7 kilograms of brown sugar were recovered from different parts of Kashmir in 2020. But experts fear this is only the tip of the iceberg.

A senior official in the Srinagar district administration, who spoke on the condition of anonymity, said that militancy in Kashmir is “90 per cent financed by the narcotic trade”.

The money involved is huge. Consider this: One gram of heroin is available for Rs.1,200-1,500 in Kupwara, but in Srinagar peddlers charge Rs. 2,500-3,000 for it. A de-addiction specialist based in Srinagar who has interacted with hundreds of peddlers and abusers over the course of two decades told Frontline that there are “invisible forces rationalising poppy cultivation”.

In September 2021, an NIA charge sheet filed in a narco-terrorism case revealed that operatives of terror outfits such as Lashkar-e-Taiba and Hizbul Mujahideen were behind the Jammu and Kashmir drug trade.

The prospect of quick money is a major trigger. This reporter learnt about a scuffle between an orchard owner and his sons living in Qazigund over poppy cultivation. While the father was content with the earnings coming from the family’s orchard, his sons were adamant to replace the trees with poppy. “We will make 1,000 times more money,” one of the sons remarked.

But heroin coming from Pakistan remains the primary source for peddlers, whose numbers have mushroomed by the day.

THE MOVE TO PEDDLING
As Jehangir’s network of friends widened, he was introduced to heroin. Dr Muzaffar, who heads the Police Control Room’s drug rehab centre in Srinagar, says that earlier the graduation from cannabis to heroin was gradual; now, most patient say they started with heroin.

By the time 2017 dawned, reminisced Jehangir, the civilian protests were all but over. But with the Central government embarking on “Operation All Out” or a “kill-all militants” strategy to eradicate terrorism, Kashmir waded into more mayhem: cordon and searches, grisly encounters, mammoth funeral processions. But he and his friends did not care as long as they had heroin. The drug was pulling beguiled teens to Sangam, 30 km south-east of Palhallan.

They would sneak into an isolated house on the city’s edges. Its windows were thickly curtained. Both and girls gathered there. Some of them appeared confused and nervous. Others were more confident. The host sprinkled a small quantity of a white powder into a chocolate wrapper. He then lit a flame beneath it and a puff of smoke leaped into the air.

Jehangir said initially these sessions were for free, but as he and his friends grew addicted to heroin, they started to be charged: Rs.2,500 a smoke. Soon left penniless, he found himself in secluded alleys after dark, passing on envelopes to youths his age.

Jehangir’s transition into a peddler, says Dr Yasir Rather, a professor of psychiatry at IMHANS Srinagar, is not unusual. “Addiction is rampant. Addicts becoming peddlers to secure a cash flow is also rampant.” According to him, the increasing crime graph in Kashmir may be linked to the spike in heroin abusers, with users turning to burglary and even murder in their desperation for the drug. A female administrator at IMHANS said some patients confessed that they had forced or beaten their wives to sell jewellery for their drugs.

TIDE OF MISERY
Dr Yasir says the tidal wave of uncertainty that defines a conflict region as well as growing financial distress are the major causes for the drug menace in Kashmir. “In the pre-conflict era, between 1980 and 1990, the total number of patients taking psychiatric treatment in Jammu and Kashmir was 10,000. Of them only 189 came for substance abuse. Most were abusing cannabis. Only a few working in the tourism sector, who had an interface with foreigners, were into heroin. Now this has spread like an epidemic.”

As militancy peaked in early 1990s, people shifted from cannabis to medicinal drugs such as benzodiazepine and codeine, before heroin became the main draw in the past decade.

Substance abuse in Kashmir is intricately linked to mental health issues. There is, therefore, an immediate need for stakeholders to provide relief, rehabilitation and social reintegration for affected people. But drug users face social stigma, beginning in their own families. Syed Mujtaba, a mental health rights lawyer in Srinagar, shared an anecdote about a teenage drug abuser whose father beat up his mother, accusing her of not raising him well. According to Mujtaba, mental healthcare must be integrated into general healthcare and the police must be sensitised to deal with abusers.

There have been harrowing cases of withdrawals and sudden deaths across Kashmir. HIV is also suspected to be spreading as intravenous drug users often recycle needles.

A patient at a rehab facility of Shri Maharaja Hari Singh Hospital in Srinagar, who underwent treatment in 2019, gave an account of how he withdrew. “It was a cousin’s wedding. We had gone to our ancestral village in Pattan. We were a group of seven or eight boys. The top floor of the house was reserved for us. In a secluded room, we started a midnight party: first the whiskey, then cannabis. And then heroin.” But as excitement peaked, his muscles cramped. His skin crawled. He was soon drenched in sweat and he collapsed. “Till 1 p.m. the next day, I was unconscious. My friends bathed me three times and concocted one excuse after another to explain my absence.”

He was lucky that he survived. In Kashmir, there has been a spate of unexplained, sudden deaths due to overdosing but in most cases, the families are loath to believe it. Even hospitals certify these deaths as caused by cardiac arrest to save the deceased’s kin from ostracism, said a de-addiction specialist.

The Valley is a troubled place today, in more ways than one. And compassionate solutions are required.