What Happened When The Taliban Visited Turkmenistan? 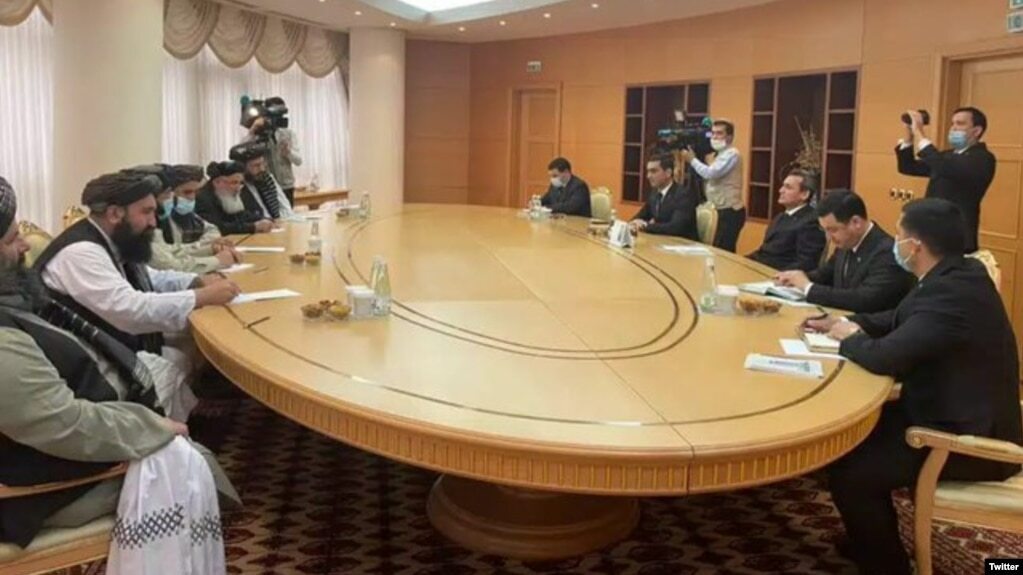 Neither Taliban nor Turkmen officials are giving any details about their talks after a delegation from the Muslim extremist group arrived in Turkmenistan on February 6.

With only scant information available about the meetings in the Turkmen capital, Ashgabat, here is what is known.

Baradar also led the Taliban delegation to Iran on January 26 and to Pakistan on December 16, 2020.

Those visits were to discuss the stalled Afghan peace talks that began last year in the Qatari capital, Doha.

The Turkmen Foreign Ministry statement included a brief statement from Taliban delegation member Mohammad Suhail Shahin, who said, “Without a doubt, the early start on the construction of projects such as TAPI, TAP, and a railroad from Turkmenistan to Afghanistan will contribute to the achievement of peace and economic development in Afghanistan.”

Shahin said the Taliban would ensure the “protection of all national projects implemented in our country” that are done to benefit the Afghan people.

He added that “we declare our full support for the realization and security of the TAPI project and other infrastructure projects in our country.”

The Value Of A Taliban Promise

The Taliban have made such promises before, including in November 2016 when spokesman Zabihullah Mujahid said in a statement that the Taliban “not only support all national projects that are in the interest of the people and result in the development and prosperity of the nation but are committed to protecting them.”

In January and February of that same year, the Taliban cut power lines in northern Afghanistan that carried electricity from Tajikistan and Uzbekistan.

The destruction left areas in northern Afghanistan without power and greatly reduced electricity supplies to Kabul.

After the Taliban pledge in 2016, Deputy presidential spokesman Shah Hussain Murtazawi said that in the months before making that promise, the Taliban had destroyed 302 schools, 41 health clinics, 50 mosque minarets, 5,305 houses, 1,818 shops, a government building, six bridges, 293 overpasses, and 123 kilometres of roads in 11 provinces.

In May 2020, Afghan Interior Ministry spokesman Tariq Arian said the Taliban had destroyed 110 public projects in 14 provinces during the previous six months, including “three pylons for electricity imported from Tajikistan in the Baghlan-e Markazi district [and] two pylons for electricity coming from Uzbekistan in the Dand-e Shahabuddin and Khwaja Alwan neighbourhoods of Pul-e Khumri, Baghlan Province.”

As for TAPI, it has been Turkmenistan’s desire to build the pipeline for more than 25 years, but security problems in Afghanistan have always made its realization impossible.

Journalist Ahmed Rashid is the author of the bestselling book Taliban and is one of the leading authorities in Afghanistan.

He told RFE/RL’s Gandhara website that “In the 1990s when Ashgabat pushed for building the TAPI pipeline it became impossible because the Taliban began executing women in the football stadiums.”

Rashid added that now “It is very unlikely that there ever will be any foreign investment in Afghanistan if the Taliban are in control of the government and they do not compromise with the Kabul regime and they do not work out their modus operandi.”

There is not only a question of foreign investment but also of who exactly would be tasked with construction.

It is presumed that foreign workers with experience building pipelines along with the necessary machinery would be brought to construction sites.

But which companies would send their employees and equipment to areas where fighting rages or areas under Taliban control, knowing these workers could be caught up in the fighting or used as human shields?

The Pipeline From Turkmenistan

Turkmenistan’s need for TAPI has never been greater. The country is mired in economic problems that stem mainly from its inability to find markets for natural gas, its main export.

The TAPI project proposes to carry 33 billion cubic meters (bcm) of Turkmen gas more than 1,000 kilometres through western Afghanistan, then across the south through Kandahar to Pakistan, and on to Fazilka in India.

Afghanistan would receive 5 bcm of that gas, Pakistan and India would both receive 14 bcm with Afghanistan and Pakistan also collecting transit fees.

Turkmenistan is desperate for revenue and late last fall started making a new push to get the TAPI project moving again after Ashgabat finally agreed to cut the price it planned to charge Pakistan and India for that gas.

Both India and Pakistan had been demanding that Turkmenistan slash its price for natural gas, with Pakistan saying it would not start construction of its section of TAPI until that dispute was resolved.

While Turkmenistan did agree to reduce the price, talks on the exact reduction continue and, as recently as September 2020, Pakistan was saying “it would like to do the TAPI groundbreaking in Pakistan at the earliest after the finalization of the issues under discussion,” one of those issues being the price of the gas, which Pakistan insists must be significantly lower than the price of liquefied natural gas (LNG).

But even if all parties are convinced of the security guarantees, there are still several obstacles facing the construction of TAPI.

What Was Discussed In Ashgabat?

One of the intriguing elements of the Taliban delegation’s visit to Ashgabat was that they were received in the capital.

Turkmenistan is an isolated country that grants very few foreigners entry and, since the coronavirus pandemic started last year, Turkmen authorities have done their best to seal the country, especially Ashgabat.

For nearly a year now, foreign flights have been directed through the eastern city of Turkmenabat.

The only visit to Ashgabat by a foreign delegation since then — excluding German doctors who flew to Turkmenistan twice to check on the president — has been a mission from the World Health Organization in July 2020 that Turkmen authorities hoped would validate their bizarre claim that the country is completely free of the coronavirus.

So whatever Turkmen officials wanted to discuss with the Taliban, it was important enough to bring them to Ashgabat.

TAPI is certainly important to Turkmenistan, but as noted, the obstacles in building the pipeline through Afghanistan remain formidable and the current situation makes construction impossible.

Electricity Instead Of Gas?

Since April 2018, Turkmenistan has offered at least three times to host Afghan peace talks, though there is no mention of such an offer being made in reports from the February 6 meeting, which is interesting when remembering that Afghan peace talks were at the top of the agenda when the Taliban recently visited Pakistan and Iran.

The Turkmen Foreign Ministry’s statement mentioned nothing about the peace talks beyond a vague allusion to the “importance of establishing and maintaining peace and stability in Afghanistan.”

But perhaps one of the main topics of discussion between the Taliban delegation and the Turkmen government was not gas, but electricity.

Turkmenistan is looking to export electricity through Afghanistan to Pakistan after the construction of a proposed 500 kilovolt TAP, a power-transmission line.

Turkmenistan already exports electricity to areas in northern Afghanistan, some of which are under Taliban control.

The Taliban have been charging residents in these areas for the electricity, though the fees are low. It is, however, unknown how much — if any — of that money goes to paying cash-strapped Turkmenistan.

The Afghan government usually is responsible for paying these power bills to Turkmenistan, though it is unclear how much Kabul pays for the electricity exports used in the Taliban-controlled areas of northern Afghanistan.

But it is clear that the Taliban uses the Turkmen electricity to further their cause in northern Afghanistan.

In late July 2018, Turkmenistan launched its third power line to Afghanistan, a 110-kilovolt transmission line that runs to Qala-e Nau, the capital of Badghis Province.

In April 2019, the Taliban cut that power by blowing up pylons in Badghis and preventing crews from reaching the sites to make repairs.

Then-Badghis Governor Abdul Ghafur Malikzai said, “[The] Taliban want electricity for 21 villages [under Taliban control in Badghis’s Mojo district] and their demand has been accepted. But it is not possible in one day.”

After the February 6 Turkmen-Taliban meeting, current Badghis Governor Hesamuddin Shams told RFE/RL’s Radio Free Afghanistan, known locally as Azadi, that he welcomes the Taliban promise not to destroy infrastructure and said they now “need to act and deliver on it.

But Shams said insurgent behaviour in his province has not changed and power lines bringing electricity from Turkmenistan continue to be targeted by extremists.

Shams also noted that the Taliban are not the only militant group operating in Badghis Province.

“The Bala Murghab [district] is a major centre of the armed opposition,” Shams said. “In addition to the Afghan fighters, it is home to militants from Uzbekistan affiliated with the Islamic Movement of Uzbekistan. There are Pakistanis too.”

Also interesting is the Turkmen authorities’ reluctance to divulge almost any information about the meeting.

RFE/RL’s Turkmen Service, known locally as Azatlyk, reports that state media said an “Afghan delegation” visited and was careful not to name any Turkmen officials who met with them, though there is at least one photo that clearly shows Turkmen Foreign Minister Rashid Meredov sitting at the negotiation table.

The Afghan government did not comment specifically on the visit but did tell Azadi that all groups in Afghanistan should protect the country’s infrastructure to avoid any further suffering by the Afghan people, while also calling on the Taliban to agree to an immediate cease-fire.

So whatever the Taliban’s business was in Ashgabat, some or most of it seems to be something that is only between them and the Turkmen government.

Turkmenistan has UN-recognized status as a neutral country and that has been especially useful when dealing with Afghanistan. Turkmenistan tries not to take anyone’s side in the long-running conflict in that war-ravaged country.

But for that reason, it is unlikely anyone involved in the Afghan conflict views Turkmenistan as a reliable ally when it comes to achieving stability.