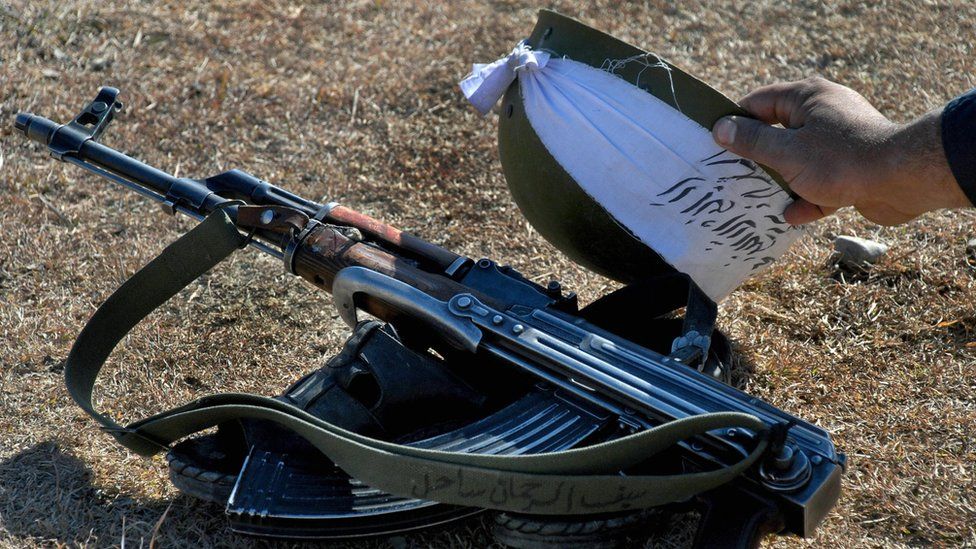 Seventeen-year-old Israr was fast asleep when his phone rang.

It was 2am and the teenager was exhausted. He’d been working all day as a guard. On the other end of the line was his brother, who told Israr that men had barged into their family house, dragged their father outside, and shot him dead. “He asked me to rush back home,” recalled Israr, whose name has been changed for his safety. I met Israr in Orakzai, one of seven districts in Pakistan’s tribal belt. Like the provinces just over the border in Afghanistan, Orakzai is home to a predominantly Pashtun population.

Three days after Israr’s father was killed, a branch of the extremist organisation Islamic State known as Islamic State Khorasan Province (IS-K), claimed responsibility for the murder. IS-K accused Israr’s father of being a Pakistani military informant, a claim rejected by Israr.

“My father just had a shop in Orakzai. He would help his tribe, especially those people who were returning to the area after being displaced due to war,” Israr said.

“He had no enemies. He was one of the elders of the area.”

In Afghanistan, the Taliban and IS-K are fighting a bloody war for pre-eminence.

Here in Pakistan, the picture is more murky.

The attack on Israr’s father wasn’t a one-off. On the same day, another man was shot dead in Orakzai, also for allegedly being an “informant” for the Pakistani military. IS-K also claimed responsibility for that attack.

Orakzai is one of seven tribal areas including Bajaur, Mohmand, Khyber, Kurram, North Waziristan and South Waziristan which were previously governed under British colonial-era law.

It was only in May 2018 that they were merged with the province of Khyber Pakhtunkhwa and turned into districts, bringing them into the Pakistani civilian fold.

There has been a surge in violence this year, according to data compiled by the Pakistan Institute for Peace Studies (PIPS), an Islamabad-based research organisation.

Tehrik-i-Taliban Pakistan (TTP), the “ideological twin” of the Afghan Taliban, is mainly responsible. TTP wants to follow in the footsteps of its Afghan counterparts and establish their interpretation of Sharia – a hard-line form of Islamic governance – in Pakistan.

According to PIPS data, the TTP carried out 95 attacks last year, killing 140 people, and 44 attacks in the first six months of this year.

As the Afghan Taliban made rapid progress in Afghanistan and started gaining control of various provinces from July onwards, the TTP increased their activity. From July until September, the group carried out another 44 attacks, claiming 73 lives. Those killed were mostly members of Pakistan’s law enforcement agencies.

And beyond the overt violence, the region has been simmering for months with threats and tension.

Some residents say they have received calls from Afghan and Pakistani numbers demanding extortion money. Ahmed – not his real name – is a social worker and businessman from Bajaur district. He told the BBC that he kept receiving calls from different numbers in July and August.

The men would introduce themselves as being from the Taliban and demand money.

“They were asking for extortion money,” Ahmed said. “And despite my refusal, they kept sending me voice notes and messages on WhatsApp, threatening that if I didn’t pay up they would harm me and my family.”

Ahmed said he contacted the district administration and presented evidence to both civilian and military authorities.

“I repeatedly informed them about it but I was told by the administration that I am not the only person receiving these calls, and many others have received the same threats here in Bajaur.

“They told me that it’s impossible to provide security to everyone, and that I must take precautions myself and install security cameras at my house.”

Who are the TTP?

The TTP was founded by Baitullah Mehsud in South Waziristan at the end of 2007. The militant movement was formed in response to a Pakistani military operation clearing the Lal Masjid mosque in Islamabad where a radical preacher held sway. He was once considered close to Pakistan’s intelligence agency, the ISI.

According to Dr Amira Jadoon, an assistant professor at the US Military Academy at West Point, the links between the Afghan and Pakistani Taliban date back to 9/11 and the fall of the first Taliban government in Afghanistan in 2001.

Analysts say that after the US-led invasion of Afghanistan the Pakistani Taliban’s leaders fought alongside the Afghan Taliban, providing food, shelter, and financial aid to the Afghan Taliban in Pakistan’s tribal areas, and also pledging allegiance to them.

But after its formation, the TTP went on a rampage against the Pakistani state, targeting both civilians and security forces. The Pakistani Army retaliated and pushed the TTP leadership to Afghanistan, where it has been based since 2015, conducting a “low-intensity” warfare against Pakistan.

As the Afghan Taliban started their march on Kabul this past July, the TTP became more visible.

Pakistani Taliban chief Noor Wali Mehsud told CNN that the Afghan Taliban’s victory would be a “victory for the entire Muslim people”. He also had a warning for Pakistan.

“Our fight is only in Pakistan where we are at war with Pakistani security forces,” he said.

“We are hoping to take control of Pakistan’s border tribal region and make them independent.”

“They feel that if America has lost out in Afghanistan, what can Pakistan do,” he said.

“Plus, they have been stoking ethnic tensions and playing up local grievances … Essentially, the TTP is trying to exploit Pashtun victimhood.”

But according to Pakistan’s former national security adviser and retired three-star General, Nasir Janjua, the TTP are a “receding phenomenon”.

“The TTP has lost its appeal among the masses. Their narrative to fight Pakistan because it sided with the US has outlived its shelf life since the Americans are no more in Afghanistan,” he said.

“Their increased violence is their struggle for survival.”

The public relations wing of the Pakistani military, the ISPR, played down the increasing number of attacks by the TTP and affiliated militants in the tribal region.

“Terrorist groups have been largely defeated. However, isolated incidents do happen,” a spokesperson told the BBC.

It is commonly accepted that the Pakistani state has a historically strong relationship with the Afghan Taliban and is encouraging the world to accept their new regime in Afghanistan.

But it has also fought a bloody battle against the Pakistani Taliban over the past decade, resulting in thousands of civilian and security forces deaths across the country.

It is often referred to as Pakistan’s “good and bad Taliban” strategy, where the Afghan Taliban are seen in a good light but the Pakistani Taliban in a bad light.

The military launched multiple operations to eliminate the militants from the tribal areas with hundreds of thousands of people forcibly displaced.

But the Pakistani government has also sought to negotiate a peace deal with various factions within the Pakistan Taliban down through the years.

However, the presence of IS-K in the tribal region causes yet another headache for the Pakistani authorities.

In Afghanistan, IS-K also has major differences with the Taliban, accusing them of abandoning Jihad for a negotiated settlement signed last year in Doha. IS-K considers the Taliban “apostates” and legitimate targets.

IS now represents a major security challenge for the incoming Afghan Taliban government, something the Taliban leadership shares in common with Western intelligence agencies.

“IS-K has sectarian differences with the TTP (Pakistani Taliban) and consider them to be misguided Muslims, who are agents of Pakistan, Iran and other regional forces,” said Abdul Sayed, a Sweden-based independent researcher on jihadism.

But experts believe that the low-level cadre of TTP and IS-K in Pakistan consist of the same members who are fluid in their allegiance and often work for both organisations.

According to Dr Jadoon, IS-K has a bigger objective in mind than the TTP.

“IS-K seeks territorial control in pursuit of a caliphate and sees itself as the only legitimate leader of the global ummah (Muslim people),” she said.

With so many militant groups in operation, life is hard for people who must live in their midst.

A former militia leader who fought the TTP alongside the Pakistani military a few years ago told me his entire family had to relocate from his village in Mohmand, a tribal district bordering Afghanistan.

“My father was martyred, my cousin was martyred, our family homes destroyed,” said the former militant, Shehzad – not his real name.

“Some of our men lost their hands, some lost their legs, and some don’t have either. None of us wanted to leave our village but what else can you do when there’s no place to live,” he said.

Ahmed, the businessman from Bajaur, also painted a gloomy picture.

“It often compels me to think about leaving my home and taking the family away. But then, where can I possibly go. How can I just walk away from my home,” he said.

Israr, the young man from Orakzai, was more forthright.

“We had no choice but to leave our home when the war started 14, 15 years ago. My parents returned two years ago but now my mother has become a widow,” he said.

“The government assured us that the peace has returned in the area and we should go back, but where is the peace?”