US to evacuate Afghans interpreters before pullout is over 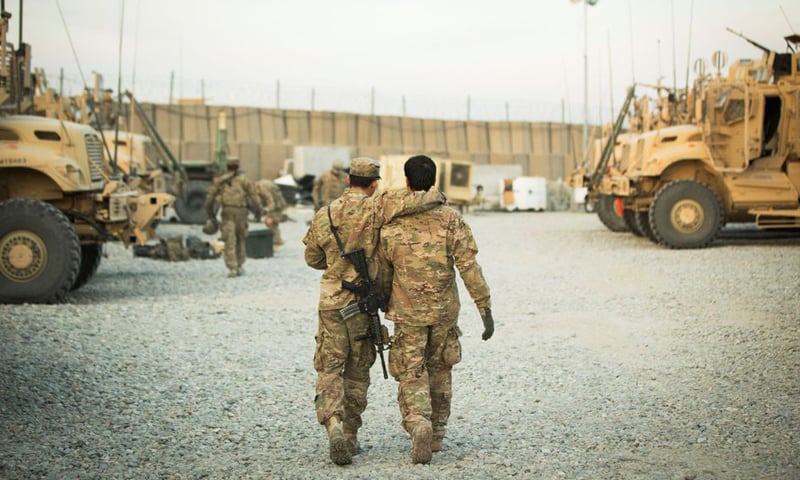 WASHINGTON: The United States is planning to evacuate a group of vulnerable Afghans interpreters before it completes its withdrawal so they can wrap up their visa applications from safety, officials said on Thursday.

The decision by President Joe Biden’s administration risks creating a sense of crisis in Afghanistan, just a day before Biden meets Afghan President Ashraf Ghani for talks aimed at projecting a sense of partnership despite the military exit.

The White House meeting comes as Taliban press a major offensive in Afghanistan, triggering growing concern in US Congress.

The US officials did not disclose where the Afghans would be transported or say how many would be involved, but said the group consisted entirely of Afghans who have already started the visa process.

“Should it become necessary, we will consider additional relocation or evacuation options,” one of the officials said.

Fighting between US-backed Afghan forces and the Taliban has surged in recent weeks, with the militants gaining control of territory. The Pentagon now estimates the Taliban control 81 of the country’s 419 district centres.

Political talks between the government and the Taliban have largely stalled and it is unclear how Afghan security forces will perform after US troops depart. The Taliban have assured Afghans who worked with foreign forces of their safety.

But as the clock ticks down, Afghans who have applied for visas increasingly fear that the Taliban will target them and their families, in retribution for helping foreign forces during America’s longest war.

Samey Honaryar, a former Afghan interpreter who was granted asylum in the United States after his life was threatened, said at a news conference at the US Capitol on on Thursday that time was running short for his compatriots.

“Please evacuate them,” he said. “They were good people, they helped you.”

The US military has completed more than half of its withdrawal from Afghanistan and is set to finish in the coming weeks. That leaves little time to process applications for special immigrant visas already filed by roughly 9,000 Afghans, or the thousands of others who have formally expressed interest.

Although the US State Department has increased staffing, officials say there is a limit to how fast a 14-step, multiple-agency process that includes security vetting can move without changes to legislation. If all goes well, a visa could normally be processed in nine to 12 months, officials say.

Administration officials say changes in legislation could accelerate the process, but its plans have been upended by the coronavirus pandemic, which has repeatedly forced the US embassy in Kabul to postpone visa interviews.

US Representative Seth Moulton, a Democrat and former Marine, introduced legislation on Thursday to help Afghans who worked for the United States.

With Honaryar and other former interpreters, he told reporters he welcomed reports of the planned evacuations.

“This is a good day in this story, but it is far from the final chapter,” Moulton said.