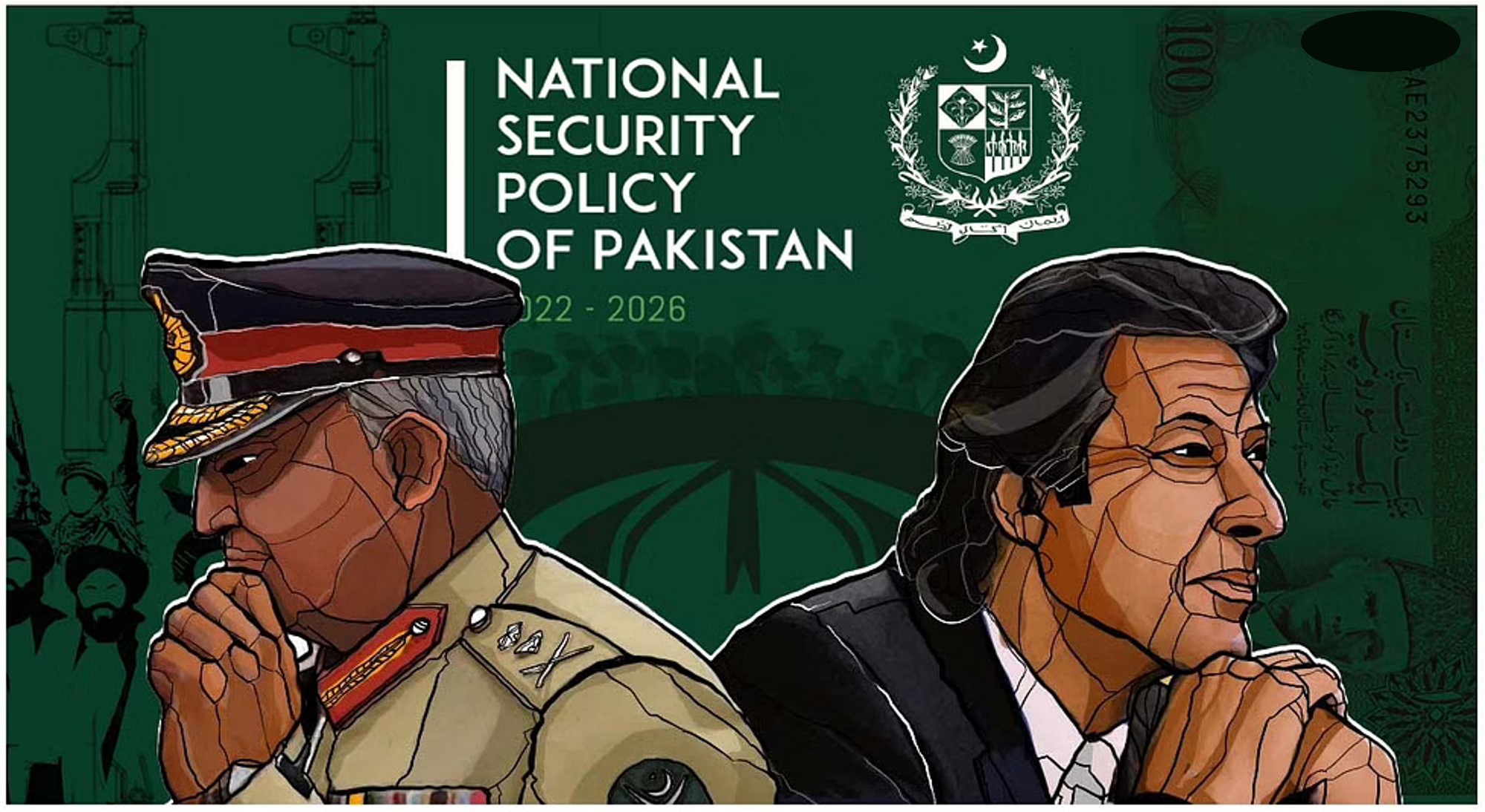 Prime Minister of Pakistan Imran Khan launched a public version of the National Security Policy (NSP) document on 14 January which sets out the state’s national security vision. It is being flaunted by the Imran Khan-led government as the first such policy document with guidelines for achieving the set national security goals. Before releasing the public version of NSP, the original and classified document was approved in the federal cabinet on 28 December 2021.

The document has been prepared by National Security Division (NSD) after seven years of consultations with relevant official stakeholders. The document is meant for five years, starting from 2022, and is supposed to be updated by NSD in demanding circumstances that have implications for Pakistan’s security. It can also be updated whenever a new government is formed in the country.

For a long time, there was a debate in Pakistan that the country lacks a comprehensive national security policy to secure national goals. Often the responses were seen as reactionary, right from joining the US block in the wake of the Cold War to joining the anti-Soviet war in Afghanistan and later participating in the US-led war on Afghanistan. In the form of NSP, an attempt has been made to bring traditional and non-traditional strands of security under one umbrella to provide overarching policy guidance.

The NSP is divided into eight sections. Placing economic security at the core, it seeks to identify some national security objectives and priority areas where it wants Pakistan’s federal and provincial governments to invest resources in coming years. Though the document appears extensive on paper, it is silent on how the government of Pakistan and federating units can achieve those objectives. It also identifies many challenges that Pakistan faces, for a change going beyond India, but it does not offer any concrete solution that can help Pakistan to be different from what it has become.

On National Security and National Cohesion

The NSP in the second section conceptualises the national security policy. It places citizen’s security and dignity at the centre. It envisions Pakistan safeguarding its sovereignty by “ensuring national cohesion and harmony, preserving territorial integrity, enhancing economic independence and ensuring the writ of the state.” Furthermore, the NSP identifies three challenges that Pakistan’s national security face. These challenges are purely economic in nature. This is where the document seems to have broadened its scope as it looks beyond that perennial “eternal enemy” —India. The three challenges are external imbalance, vertical inequalities and horizontal inequalities. For long-term sustainability, addressing the external imbalance or higher foreign exchange outflow is seen as significant. The vertical inequality manifested in the gap between rich and poor is to be addressed by providing direct support to vulnerable citizens. The disparity in the economic development of various regions is seen as a major concern which the sub-nationalist elements exploit “to generate a narrative of grievance based on underdevelopment in their regions.” The horizontal inequalities or more precisely the regional aspirations are supposed to be addressed through development packages.

The NSP uses the catchphrase “unity in diversity” twice and sees it as a guiding principle for national cohesion. However, the document does not offer any solution to curb religious radicalisation in the country. Instead, it identifies Pakistan as “an Islamic state” and sees the unknown external hand involved in shaping the discourse around ethnic, religious and social differences. To counter this, the document calls for the promotion of undefined “inclusive national discourse” and bats for the preservation of the Islamic character as enshrined in the country’s constitution. Can the preservation of Islamic character and promotion of inter-faith harmony really help Pakistan when the state is not ready to free the people from the narrow ideological paradigm of nationalism? The promotion of Pakistan as an Islamic state has proved counterproductive, and the fact that it is not achievable in the modern state system is entirely overlooked. As pointed out by Ashok Behuria in his recent book, the first and foremost step that can help Pakistan to reimagine itself as a stable state is to “deemphasize on Islam as a major referent in the conduct of state affairs”.

On India and Pakistan’s Territorial Integrity

The fifth section of the document talks about the conventional military threats, maritime competition, deterrence in the South Asian region, space and cyber security issues. It also highlights the increasing role of military and law enforcement agencies in ensuring the defence and territorial integrity of the country.

At the centre of this section is India. Barring the three mentions of the Indian Ocean, the name of India appears 14 times in the document and only once it talks positively about it saying “Pakistan wishes to improve its relationship with India”. At all other mentions, the approach is negative. Expressing concerns over the alleged ceasefire violations by India, the document wants Pakistan to shift attention towards the Line of Control and the Working Boundary.

In the case of maritime security, the document without naming any country denounces the self-professed role of any one country as a net security provider in the wider Indian Ocean. The expansion of India’s triad and investment in modern technologies is seen as something that disturbs the regional balance. Again, without naming India or Afghanistan, the policy document sees the prospects of violent conflict growing with the increase in what it calls “regressive and dangerous ideology” in Pakistan’s immediate neighbourhood. The document does not rule out the possibility of use of force “as a deliberate policy choice” by “the adversary” and reiterates the commitment of defending the territory in response to any such misadventure. Such a scenario calls for a renewed focus on strengthening Pakistan’s capabilities including the deterrence regime and an astute investment for modernisation of armed forces.

The section on internal security is important in the sense that it talks about issues that have been challenging the writ of the state of Pakistan: Sub-nationalist movements, sectarianism and terrorism. Preventing the formation of alternative centres of power and authority and ensuring the writ of the state in all regions of the country is the policy objective underlined in this section.

Though the realisation that terrorism undermines state stability and national harmony seems timely; the solution offered to address them appears hollow and ineffective. The document aims to address the grievances by addressing the structural deficiency and a sense of deprivation in areas of recruitment and by promoting “a pluralistic anti-terror narrative”. At the same time, the document downplays the challenge of sub-national movements by writing them off as “fringe” elements being exploited by “hostile intelligence agencies”. It also sees the socio-economic disparity as an enabling factor for sub-national aspirations and seeks to employ a four-pronged strategy of engagement like distinguishing reconcilables from irreconcilables (most probably in Baluchistan), cutting off recruitment, constricting financial sources and pursuing targeted socio-economic policies to address this issue. In order to deal with violent extremist ideologies, the document seeks to promote a “united narrative” and expand de-radicalisation programmes. This indeed is going to be the biggest challenge as mainstreaming people who have been trained along the lines of an extremist ideology for decades is not going to be easy.

The policy agenda in a section about foreign policy is set in the backdrop of the continuous changes in the geo-political arena. The document guides Pakistan to adopt a dynamic approach in a world where great power competition defines the race over resources and issue-based partnership is being preferred over regionalism as an alternative mechanism of cooperation. The approach is to leverage political relations for economic gains. Given Pakistan’s geo-economic location, the document sees the country as a melting pot of regional and global economic interests. However, for this to happen, Pakistan would need to prove itself as a responsible state.

The policy document maintains that Pakistan is willing to have a mutually beneficial relationship with all major powers and is committed towards “normalization of relations with its neighbours based on mutual respect and sovereign equality including India”. At the same time, it raises the issue of Jammu and Kashmir and blames India for having “hegemonic designs” and responsible for frozen bilateral ties. The document reiterates the same old policy about Jammu and Kashmir that “resolution of Jammu and Kashmir dispute remains a vital national security interest for Pakistan.” There is an assertion that Pakistan would continue to provide moral, legal and diplomatic support to the people of Kashmir until they achieve the right to self-determination. It goes on to talk about India’s arms build-up and access to advanced technologies and perceives India’s inclusion into Nuclear Suppliers Group (NSG) despite being a non-signatory to NPT as a major concern.

Pakistan seeks to fulfil all the objectives mentioned in the document and those in the last section like health security, sustainable water management and gender security through what it calls the “whole-of-nation approach” which entails synergising collective effort. There is a hint towards breaking the inertia of the status quo and embracing change to forge a more prosperous Pakistan. However, the question is whether it is possible, if Pakistan continues to remain entangled with the past. Unless and until all institutions in Pakistan work together to define the statecraft in liberal terms and the secular elite stops forging unholy alliances with Islamists who keep on fostering an image of India as an “eternal enemy”, a change seems unlikely.