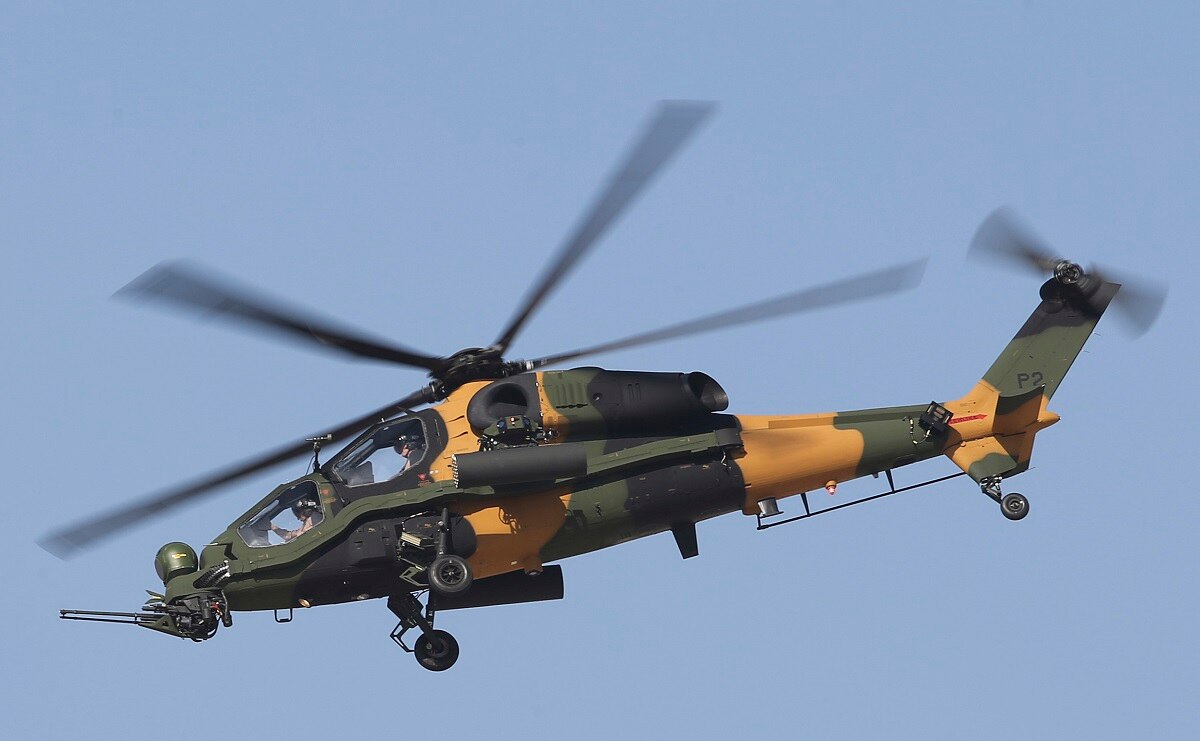 ANKARA, Turkey — The Philippines announced Tuesday that it will receive two of six T129 Atak helicopters on order from Turkish Aerospace Industries in September.

The president of TAI announced in April that his company had won U.S. export licenses to sell a batch of six helicopter gunships to the Philippines. But only a month earlier, Turkey’s persistent requests for the same export license to sell the same helicopters to Pakistan were going nowhere.

“Based on the latest developments, we are expecting the first two units of T129 attack helicopters for the Philippine Air Force (PAF) to be delivered this September,” Philippine Department of National Defense spokesperson Arsenio Andolong said in a statement. However, a source with TAI told Defense News the first deliveries are planned for November.

The department reported that two more helicopters will be delivered in February 2022 and the final two in 2023, with Andolong telling the official Philippine News Agency that the helicopters will cost $269 million under a government-to-government contract.

The 5-ton T129 is a twin-engine multirole attack helicopter originally produced under license from the Italian-British company AgustaWestland and based on the A129 Mangusta. AgustaWestland is now Leonardo Helicopters following a name change; the company is Italian but has an operation in the U.K. The aircraft is powered by two LHTEC T800-4A turboshaft engines, each of which can produce 1,014 kilowatts of output power.

The T129s will be part of the Philippine Air Force’s 15th Strike Wing, whose pilots and crew will be undergoing training on the helicopter at the TAI headquarters in Ankara between May and August, TAI and PAF announced separately.

The aircraft will be the first dedicated attack helicopter operated by the Philippines, and the 15th Strike Wing will fly them alongside its MD530G light attack and Leonardo A109 armed transport helicopters. The country previously used its armed helicopters in operations against a number of insurgencies — with which it is currently contending — mostly on its southernmost islands where separatist and Islamic State-linked militants are active.

What’s the problem in Pakistan?

In March, Pakistan agreed to, yet again, extend a deal with Turkey for T129 Atak helicopters — a planned procurement riddled with delays. Top Turkish officials said TAI obtained a six-month extension from Pakistan.

In 2018, Pakistan chose the T129 to replace its fleet of AH−1F Cobra gunships that were acquired in the 1980s. Pakistan signed a $1.5 billion contract with TAI for 30 T129 helos; however, the company first had to secure U.S. export licenses before delivery could take place.

The T800-4A engine for the helicopter is an export version of the CTS800 engine. LHTEC, the maker of the engine, is a joint venture between the American firm Honeywell and the British company Rolls-Royce.

The Turkey-Pakistan deal has been in limbo because of U.S. hesitancy to issue export licenses for the engine. The roadblock also comes amid Washington’s enduring opposition to Ankara purchasing the Russian-made S-400 Triumf air defense system. U.S. lawmakers have quietly frozen all major U.S. arms sales to the NATO ally to pressure Ankara to abandon the S-400.

A Turkish aerospace official previously told Defense News that the engine isn’t the only hiccup.

“There are other components the Americans can refuse to issue export licenses for,” he said. “We have the impression that the T129 deal would not go through without a political go-ahead from Washington.”

Separate from the engines, the Biden administration pulled back requests made to Congress to approve sales to Turkey’s defense procurement agency, the Presidency of Defence Industries, on which the U.S. imposed sanctions in December 2020 in response to the S-400 purchase. Honeywell withdrew the engine export request early last year, but then resubmitted it in August.

Defense News reached out to Honeywell for comment, but the company did not respond by press time. Rolls-Royce refused to comment for this story.

How did the Philippines deal work out?

According to a top procurement official in Ankara, American export licenses “are not issued or denied for Turkey — in this case the maker and exporter of the weapons system. They are issued for the end-user country — in this case [for the Philippines], the engine export license was granted for the sale to the Philippines, not to Turkey [or TAI] as a blanket approval.”

U.S. lawmakers are concerned the engines for the attack helicopters could add to Pakistan’s ground-attack capability against India, with whom the U.S. has a strong defense and security relationship.

“Apparently the same U.S. concerns about Pakistan’s attack helicopter capabilities are not valid for the Philippines,” the procurement official said.

Though groups have called for an end to U.S. arms and military support to Manila as leverage to end systematic killings and other human rights abuse, the backing is expected to continue under the Biden administration. Furthermore, there’s reportedly a pending deal to authorize the continued presence of U.S. troops in the Philippines.

The U.S. State Department refused to comment for this story.

Will this set a precedent?

A similar case may be brewing about Turkey’s TB2 Bayraktar drones, built by the privately owned company Baykar Makina. In October, then-Canadian Foreign Affairs Minister Francois-Philippe Champagne announced that Ottawa suspended export permits of drone technology to Turkey, which was backing Azerbaijan during its conflict with Armenia.

Champagne issued the pause in exports alongside an order for his ministry to investigate claims that Canadian drone technology was being used in the fighting. The decision followed an announcement by disarmament group Project Ploughshares, which warned the multimillion-dollar exports of high-tech sensors and targeting technology produced by L3Harris Technologies subsidiary WESCAM in Burlington, Ontario, are in direct contravention of Canada’s domestic laws and its international obligations under the United Nations Arms Trade Treaty, to which the Trudeau government acceded almost exactly a year ago.

WESCAM is one of the world’s leading producers and exporters of electro-optical/infrared imaging and targeting sensor systems — both of which are featured on the Bayraktar drones.

Baykar Makina has so far sold the TB2 to Ukraine, Qatar, Azerbaijan and Poland. The company is in talks to finalize an export deal for Morocco, hoping to follow the precedent set with the Philippine T129 order.

“Canada suspended the sale of electro-optical cameras to Turkey. This does not mean Canada will not allow Canadian-made cameras on a Turkish-made drone, with the end user being by the Moroccan military,” a Turkish Defense Ministry official said.