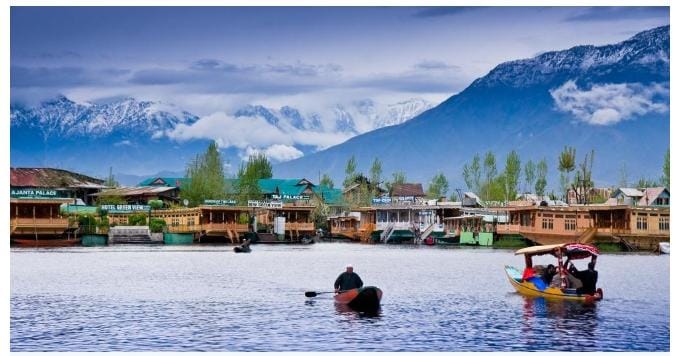 Going by the footfall in the first three months of the year, Kashmir is poised to break the number of 13 lakh tourist arrivals recorded in 2011
Officials say seven thousand holidaymakers have reached Kashmir daily in the last three days, taking the number to 1.60 lakh in March. In January and February, despite disruptions in air and surface transport due to bad weather, 61,400 and 1.05 lakh guests arrived in the Valley. The numbers are expected to go up in the next three months.

On Monday, the highest-ever 90 flights operated to and from Srinagar international airport, ferrying more than 15,000 passengers, mostly tourists.

“This is a record number of flights in the aviation history of Kashmir,” an airport official said, adding 50 to 65 flights would usually operate in peak summers here and even fewer in winters.

Ahsan Chisti, deputy director with the tourism department, says if all goes as per plan, the tourist numbers will surpass all records.

“Comparative figures of the last few years suggest the footfall doubled in winter months,” he said.

The good news for the stakeholders is that high-spending tourists are visiting this time. “Those who can afford decent accommodations and spend well,” Chisti told News18, sounding elated.

There are reports that a room in Gulmarg in winters sold at Rs 35,000 and more. Officials hosting a delegation from the Gulf countries last week told News18 that the government was keen to invite some investors from there to build “fancy hotels and other facilities in line with modern industry protocol”.

In the last two years, Chisti and fellow officers, disregarding the peak Covid crisis, had travelled to many Indian cities to woo prospective tourists. Chisti was sent to Kolkata and got the attention of Kashmir’s “old and reliable Bengali friends”.

“When I landed at Kolkata airport and drove towards the city, I could barely see people walking on the roads. Even the hotel where I put up was empty; only four rooms were occupied. Covid was at its peak,” he recalled. “But when we set our promotional drive rolling to convince people to visit us, we knew we had succeeded.”

Officials had told them Kashmir was very safe in terms of the security situation and Covid was in check with cent per cent of tourist operators doubly vaccinated.

The department had rushed officers with the “Kashmir was safe” message also to Chennai, Hyderabad, Lucknow, Ahmedabad, etc, and urged the people there to visit the Valley in winters and spring — the two most attractive seasons when snow and blossoms pull visitors like iron filings to magnets.

“Our hotel people say they are booked for the next three months,” said Chisiti.

Ghulam Nabi Itoo, director, tourism department, said the roaring beginning has been achieved by three things. “One, the early promotion in big Indian cities; two, tourism festivals in Kashmir like lighting up the houseboats during nights, tulip garden; and three, opening up of many tourist destinations,” he said. Apart from the three important picnic spots of Pahalgam, Gulmarg and Sonmarg, the department also made Doodhpathri, Tangmarg, Drang and Yusmarg accessible even in the winters.

“Kashmir isn’t about the three postcard picnic destinations,” he said.

Itoo said he is expecting a vibrant summer and for that 75 tourist destinations — about 30 of them in the Jammu region— will be made available for sightseeing.

“In summers, new trekking and mountaineering sites would be thrown open. Adventure sports like paragliding and rafting would be major attractions,” he said.

The tourism department will make accessible some hitherto closed destinations near the Line of Control like Gurez, Uri, Tangdhar, etc, and some areas in Jammu. “Those having the stamina and eye for extreme sports will take it,” Itoo said.

Chisti said the department did some minor tweaking to attract tourists: like keeping houseboats open even during the winters. It was a unique experience and it paid off, he said.

An early calibrated and staggered strategy for unlocking after Covid in winters helped them to best compete and get people to the Valley, said Chisti. “We prepared early and that is why we have left the traditional competitors like Kerala and Himachal far behind,” he said.

The tourism department was very aggressive in vaccinating tour and travel operators, hotel staff, cab drivers, houseboats and Shikara Wallas. And then convincing the counterparts about the same.

“The footfall you see today is a result of two years of relentless work by the department and stakeholders, in terms of strict Covid management, vaccination drive and staggered unlocking,” said Chisti. “And we look forward to the most happening summer and autumn seasons.”

A look around at Dal lake suggests the footfall is huge. Every morning or evening, the lake area and the boulevard are swarming with tourists. The lakefront looks packed with Shikaras setting sail on its waters. Hotels and eateries are doing brisk business while the tourist-filled cabs add to the traffic madness that Srinagar becomes during peak hours.

“We are very busy these days. One hotel is full and another we are doing up,” Imtiyaz Ahmad Mishri, a hotel owner, told News 18. Many hotel owners on the boulevard are contemplating doing away with the government contract that made them keep officials at lower rates. They want the rooms vacant for better-paying tourists.

Misri, an avid cyclist who has been a regular with his morning bicycle jaunt for the last two decades, has no time for his passion now. “I don’t get time to rewind these days,” he said. “Going by what I see, the summers will get crazier.”