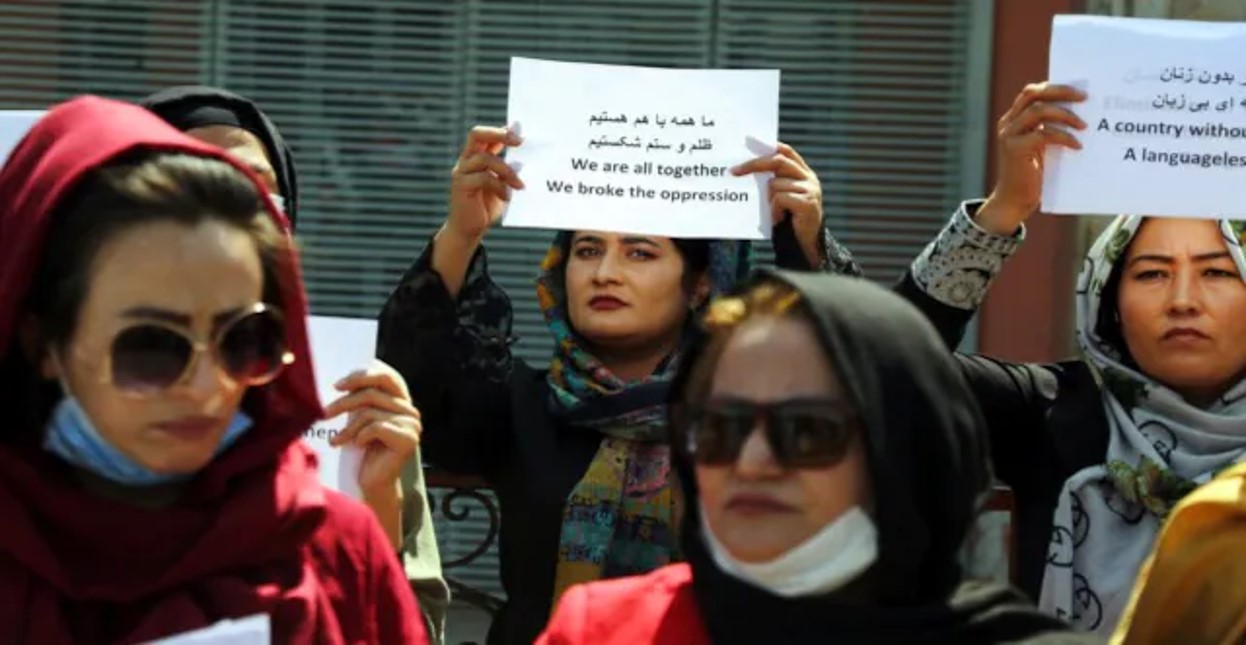 On a raw January morning, Khujasta Elham trudged through a snowstorm to sign her name on a government register. Before the Taliban seized power in August, Elham was director of women’s programs for Afghanistan’s Civil Service Commission. But she and most other female government workers were prevented from returning to work by the Taliban’s new Islamic Emirate.

Now Elham, who says she has not been paid since August, is required to sign in at her old job site once a month — a fiction that allows the Taliban to deny that they have fired female government workers. The grim routine also diminishes any hope for Elham that she will one day return to work.

The dismissal of female workers is one of many indignities that have prompted small bands of women like Elham to take to the streets in protest, risking beatings or arrest. Taliban gunmen have pointed weapons at the demonstrators, sprayed them with pepper spray and called them “whores” and “puppets of the West,” Human Rights Watch said. Bearing placards and raising their fists, the women have resisted persistent attempts to erase them from public life.

The protests rarely last for long. Taliban enforcers have roughed up women, beaten them and sprayed them with chemical irritants, activists say. Elham and others say they have received threatening phone calls from intelligence officers, warning them to stay silent or face unspecified “consequences.”

“He asked me if I knew they had prisons for people like me,” Elham said of a Taliban intelligence officer who ordered her to end the demonstrations she has helped to organize.

As the Taliban continue to demand humanitarian aid and diplomatic recognition, the United States and other countries and international bodies have insisted that Afghanistan’s new rulers roll back their limits on women’s rights. The issue is a main point of discussion this week as Taliban delegates have begun meeting with international officials in Oslo, Norway.

Among the most dramatic consequences of the Taliban takeover has been the swift reversal of gains made by women for two decades following the U.S.-led invasion that toppled the previous Taliban government in 2001. Women attended schools and universities and served in parliament and government. They served in the army, the police force and as lawyers and judges.

Women once made up at least a quarter of the government workforce. But the Taliban have allowed only a handful of female medical workers and educators to retain their government jobs.

Most Afghan girls above the sixth grade have not attended school since August. In September, the Taliban have converted the Ministry of Women’s Affairs building into offices for the religious morality police. Last month, the Taliban banned women from taking long journeys without a male relative and from using public transport without a hijab, a type of headscarf.

The Taliban have also targeted activists protesting the restrictions. To avoid arrest, Elham and other demonstrators say they rotate among safe houses and communicate only by encrypted phone apps.

Rokhshana Rezai, 27, a prominent activist, said she once dressed as a man to pass through Taliban checkpoints after receiving threatening calls from Taliban officials. But she has continued to attend protests. Video from one recent demonstration shows her defiantly pulling away from a Talib who had grabbed her arm and tried to drag her away.

“We are getting more afraid,” Rezai said. “They are not going to respect our rights and dignity.”

Taliban officials have said that prior approval was required to hold a protest. But when the women have requested permission, Rezai said, “They don’t allow it, and they never will.”

On Jan. 19, three days after women protested the hijab directive, two activists were taken at gunpoint from homes in Kabul, said Zarifa Yaqoobi, 28, a leader of a group called the Afghan Powerful Women’s Movement. Yaqoobi said the women’s family members told her the women were taken away at night by armed men.

A video posted on social media shows Paryani screaming for help and shouting that the Taliban were pounding on her door. The Taliban have publicly denied any involvement in the detainment of Paryani and others.

Qari Saeed Khosty, a Ministry of Interior spokesperson, said that Paryani’s video had been fabricated “to create a case” intended to attract international attention.

“They are liars, and I don’t want to talk about it,” Gen. Mubeen Khan, a police spokesperson in Kabul, said of media reports about the disappearances. In a follow-up call, he told The Times: “Anyone who disrupts the public must be arrested. An order has gone to all security forces to arrest them and bring them to justice

The crackdown on women’s demonstrations in Afghanistan has raised concerns among human rights organizations. Human Rights Watch said it represented “an alarming and unlawful escalation of efforts to suppress peaceful protest and free speech in Afghanistan.” The United Nations Assistance Mission in Afghanistan has called on the Taliban to provide information about the missing women.

Women’s rights activists and human rights groups have also called on the Taliban to provide information about the disappearance of Alia Azizi, a prison official in the western city of Herat. Azizi never returned home from work on Oct. 2.

Heather Barr, associate director of women’s rights at Human Rights Watch, said “the extremely muted response” from the international community coupled with the crackdowns on the Afghan news media had emboldened the Taliban.

“This is a sign that the Taliban feel these protests now need to be entirely stopped, whatever level of brutality that takes,” she said.

The disappearance of the two female activists was raised by an activist from Afghanistan at a conference that opened in Oslo on Sunday among the Taliban and representatives from the United States and European nations, The Associated Press reported.

For the Taliban, the conference offers a platform to present their new Islamic Emirate as less oppressive than the Taliban government of the 1990s. For the United States and European nations, the meeting provides an opportunity to confront Taliban leaders face-to-face to demand improved human rights, an inclusive government, women’s rights and other reforms.

Afghans critical of the conference have protested outside the Foreign Ministry in Oslo, saying the Taliban should not be awarded an international platform.

On Jan. 23, Monisa Mubariz, co-founder of the Afghan Powerful Women’s Movement, and Yaqoobi held a brief, clandestine news conference in a private home inside a walled compound. They asked the small group of journalists who attended not to livestream the event for fear of alerting the Taliban.

Under the Taliban, Mubariz told the journalists, “Women have been deprived of the right to work and to participate in political and economic life. They are consistently repressed, punished illegally, insulted and humiliated.”

Such public criticism only heightened the risk of Taliban reprisals, Yaqoobi acknowledged. “That’s why we have to operate in secret,” she said. “But we will never stop raising our voices.”

Days before the news conference, Mubariz spoke in a coffee shop’s family section, set aside for women to keep them separated from men. Before the Taliban takeover, several coffee shops in Kabul allowed women to sit and socialize with men — a quiet symbol of progress that has slowly eroded under the Taliban.

Mubariz said her parents and friends have begged her to cease her protests — or at least to wear body armor to protect herself. She wiped away tears as she described the overwhelming sense of loss she felt since losing her job and watching women’s rights being stripped away.

For Rezai, the Taliban threats and crackdowns have eroded her once boundless faith in Afghanistan’s future.

“Whatever goals, freedoms, wishes, dreams, choices, education and jobs women once had are gone,” she said. “I am feeling angry — my body is without a soul and all our dreams are nothing now.”