The Surrender of Dacca-Pakistan’s Faulty Deployment of Forces 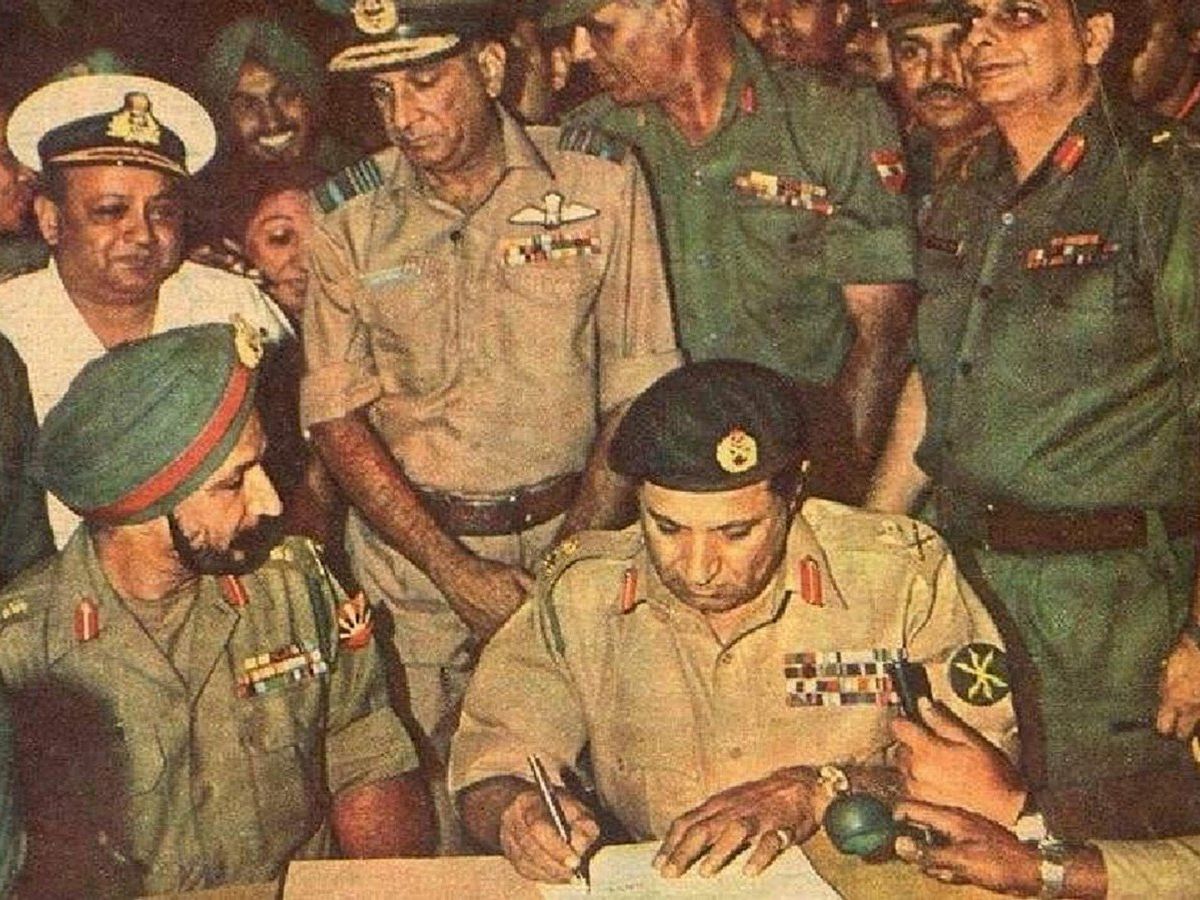 The inevitable has happened. In 12 days the Pakistani war machine has been brought to a standstill. That is what I predicted before General Yahya Khan’s declaration of war. It was, I said at that time the last throw of a gambler, and it has been proved so. How strange that Yahya himself could not have realised this? Instead, he depended on false hopes held out by friendly powers and plunged the sub-continent into a holocaust which India had tried its best to avoid. From the time Yahya launched his pre-emptive air attack on 3rd December, the war went against the Pakistani forces in every sector and in every sphere, land, air and sea. Pakistan hoped to be able to hold us on the Western Front against its well-prepared fixed defences-anti-tank canals, ditches, pill-holes, bunds and embankments. It had further strengthened these defences by extensive flooding of canals and ditches. Indeed, it wanted us to attack in the Punjab Sector where it was strong, so that it could wear down our marginal superiority of forces in the Western Front. It did not succeed in this. Our forces inflicted severe damage on the Pakistanis before withdrawing from enclaves across the rivers. In this way our defences became even stronger than before, for a water-line is always easier to defend than a line on the ground. In this category fall the battles of Hussainiwala, Ajnala and Chhamb. Likewise, we pushed the enemy from the enclave of Dera Baba Nanak, on our side of the river Ravi.

The Desert Offensive
The battle in the Rajasthan desert and the Rann of Kutch is another story. Here we surprised Pakistan by taking the offensive and captured nearly 8,000 square miles across the border. The idea was to forestall any Pakistani move and ensure the security of the lightly held and more or less open border between Rajasthan and Sind. It was this move that frustrated Pakistan’s strong armour and infantry push towards Jaisalmer.

The Jammu and Kashmir Sector
In Jammu and Kashmir, we captured across the cease-fire line enemy posts which overlooked ours, as in Punch and Tithwal areas and dominated our vital communications, like the heights in Kargil. Wisely, we did not commit on the Western Front our reserve Corps, including the Armoured Division, which Pakistan had so earnestly hoped. It was to wear down such an offensive that Pakistan left its Armoured Divisions uncommitted. That is why there has been till two days ago no tank battle in this war like the one we fought in the Khem Karan or Sialkot areas in 1965, and there was comparatively less use of armour on either side during this war.

The Eastern Front
On the Eastern Front, I was for taking the initiative and liberating Bangladesh by our regular forces in one sweep, aimed at the capture of Dacca, rather than nibbling at the periphery in support of the Mukti Bahini. For there is nothing more disconcerting for regular troops than to play second fiddle to a para-military force. This is not to question the bravery, self-sacrifice and determination shown by the Mukti Bahini. But in this case, time was of the greatest importance in view of the likely intervention by the United Nations, or other world powers. And the Mukti Bahini alone, even if the Indian Army was to stand in the background and give all help, could not have finished the job against the Pakistani regular Army so quickly.

It is now clear that the Pakistani senior military leadership in Bangladesh lacked the concept of defending themselves in a military situation as it prevailed there. They deployed their forces in penny pockets all over the country-side and along the periphery of Bangladesh and ordered them to hold on at all cost, failing to realise that the key to their stranglehold on Bangladesh lay in the capital city of Dacca. The defence of Dacca should have been their first priority; as the town, surrounded as it is by a network of river-sand distributories on its three sides, is easily defensible. It could have been converted into a fortress, difficult for the Indian Army to reduce in a hurry. On the contrary, Dacca was surrendered by General Niazi without a single shot having been fired in its defence.

We failed to take advantage of this faulty deployment on the part of Pakistan. Our first and foremost objective should have been Dacca, and we should have made for it in full strength and with the utmost speed. There is no reason why we could not have captured intact the Ashuganj bridge – the only bridge over the Meghna giving a direct route to Dacca – by a properly planned action, especially when the Pakistani forces would have been hesitant to destroy the bridge with a major portion of their forces still deployed on the wrong side of it. Similarly, we could have dashed for the Goalundo Ghat ferry from the other direction, by-passing the enemy’s strong point at Jessore and crossed the Padma river using the engineering and local resources at our command. In this manner our objective could have been realised with comparatively little loss of life and material. This suggestion is purely from a military point of view. I am sure that there must have been political reasons for our armed forces to comb the whole area of Bangladesh.

Simultaneous Assault
Now to go over the operations as they took place. The Ganga and the Jamuna which join to form the Padma, divide Bangladesh into three distinct parts, that is, the eastern, northern and western areas. The eastern area consists of Mymensingh, Dacca and Comila Khulna districts; the northern of the western districts of Thakurgaon, Dinajpur, Rangpur, and Bogra. Rajashahi constitutes the third area, which lies in the fork formed by the Ganga and the Jamuna. Pakistan, it seems, had deployed a Division each for the defence of these three areas. We launched offensives in these areas, simultaneously using a Corps strength each. While the role of the Northern and Western Corps was to occupy rapidly the District Headquarters in their respective areas, the aim of the Eastern Corps, having entered its sector from the north and east, was to secure Jamalpur and Mymensingh on the one hand and Akhaura and Comila on the other, and then advance towards Dacca. These moves were dictated by the run of the rivers and their distributories.

The real advance from all directions started after the Pakistani attack on the Western Front, on the evening of 3rd December. Within ten days most of the District Headquarters, like Thakurgaon, Dinajpur, Rangpur, Rajashahi, Bogra, Kushtia, Jessore, Faridpur, Mymensingh, Sylhet and Comila were occupied.

The column from Akhaura, secured the ferry across the Meghnand Ashuganj on 12th December, but it failed to capture intact the railway bridge at Bhairab Bazar. This did delay the advance to some extent, but the forward elements of this column were soon on their way to Dacca along the railway line from Bhairab Bazar to Tungi. Simultaneously, the Northern thrust of the Corps, after capturing Mymensingh, made a dash towards Dacca via the Mymensingh-Tangail-Tungi road. As these two columns were nearing Tungi, a para drop was carried out north of Dacca on the night of 13th14th December, presumably with a view to securing the bridges on the Lokhya distributory of the Meghnand and the Turag distributary of the Burhi Ganga.

Whether the para forces were able to carry out these roles successfully is not known, but they were certainly responsible for creating consternation and panic in Dacca and hastening the advance of the two columns. The capture of a Brigadier and five or six other officers north of Dacca, about this time, might well have been the work of the para force. And it could be that the Brigadier captured was in command of the covering force responsible for the defence of Dacca. By the evening of 14th December, our forces started knocking at the other defences of Dacca, and it was apparent that not much opposition was going to be encountered before entering the city.

While these two columns advanced from the north, other smaller columns converged along the rivers south of Dacca, from the south-east, south and south-west, and it appeared that a complete ring had been formed around this vital objective. The fall of Dacca now depended on the strength of the Garrison earmarked for the defence of the city, about which there were varying estimates, from a brigade to a Division, and the will of the Commander, Lt Gen Niazi. In spite of Gen Niazi’s brash claim that he would hold on till the ‘last man and the last round’, his nerves are reported to have given way, and he sent an appeal for a cease-fire on the evening of 15th December, much too soon by military standards of perseverance and grit. Never before in military history has a capital city been surrendered without a single shot being fired in its defence, notwithstanding the handicaps of being cut off from the mainland of Pakistan and bereft of air support. Full marks to our Army for their courage, perseverance and tenacity.

Air Supremacy
Our Air Force also had done a wonderful job. We achieved complete supremacy in the Eastern theatre and near domination in the Western theatre. Unlike 1965, co-operation between the Army and the Air Force have also been of a high order, and many battles have been won through a combined effort. As for our budding Navy, it has established its name and fame among the navies of the world. In spite of its small size, its daring action in the home waters of Pakistan, as, indeed, within the Karachi Naval base, is worthy of laurels of the highest order.

The contribution of these comparatively young services, that is the Air Force and Navy, in the defeat of the Pakistani forces in Bangladesh is no less than that of the Army. And they may justifiably claim full credit for the fine achievement. As an old soldier, I salute them all – the soldiers, the sailors and the airmen, and rejoice in their moment of glory.