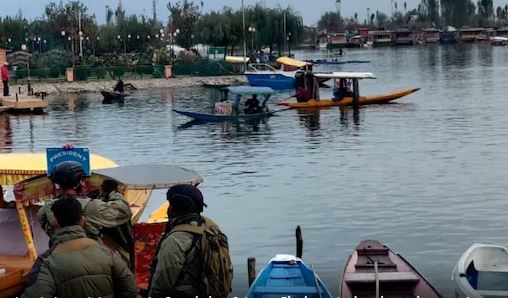 The media faction running secessionist propaganda was emboldened by financial and moral support provided by Pakistan’s ISI through separatist organisations like Hurriyat Conference.
Media fraternity in Kashmir has been witnessing a deep ideological divide since the last many decades. The opposing political narratives on Kashmir conflict have formed the bedrock of media posturing. The media faction feeding the secessionist narrative has been the most predominant in the Valley, especially in the last 30 years.

Not just hard-core separatist organisations like the All Parties Hurriyat Conference, or terror organisations like the Hizbul Mujahideen, the Jammu Kashmir Liberation Front (JKLF) and others, or mainstream political parties peddling soft separatism, the media fraternity too has produced multiple narratives of the separatist ideology for the common masses to gobble up. This resulted in most Kashmiris getting influenced by reading about and hearing predominantly a singular narrative, which embedded separatism deep into the ordinary minds through these propagandists operating under the cover of journalism.

Eventually Kashmir has suffered from the “Single Story” syndrome. Renowned Nigerian author Chimamanda Ngozi Adichie best describes it as “The Danger of a Single Story”; she summarises it: “If we only hear about the people, place or situation from one point of view, we risk accepting one experience as the whole truth”.

Unfortunately, “The Whole Truth” became the first victim of this conflict. On one end, endless stories, opinions and interviews highlighting alleged state violence became an everyday affair for these propagandists, on the other hand, the stories of those who brutally suffered at the hands of separatist violence never found the same prominence in the media. Their stories quietly disappeared from the public minds. The vicious cycle of manufacturing secessionist narrative continued unabated as journalists who stood up for the “whole truth” were either ruthlessly murdered by Pakistan-backed terrorists or silenced by threats and coercion so that only the Pakistan-backed propaganda warfare could continue unchallenged.

The media faction running secessionist propaganda was constantly emboldened by the financial and moral support provided by Pakistan’s ISI through separatist organisations like the Hurriyat Conference and others. This media faction, with majority working as freelancers, became the most dominant voice in the Valley. They
also positioned themselves as power brokers of the Valley by playing the role of middlemen between the mainstream and the secessionist groups. They pandered to both sides and became conflict entrepreneurs by amassing wealth and started drawing perks and privileges from both sides.

This resulted in mushrooming of radicalised new-age journalists who worked with the help of a well-oiled network with a single agenda of spearheading anti-India narrative by tarnishing the image of Indian institutions and supporting the secessionist ideology through their work and writings. They also found space and even full-time employment with many national and international media houses and subverted those organisations from within by peddling the single separatist narrative. They also found support from some veteran ideologues, who not only trained them but also sustained these new-age anti-India journalists. After the abrogation of Article 370 and the subsequent crackdown on secessionist ideologues, the security agencies have been flagging these conflict entrepreneurs in their dossiers and some of them have been arrested for supporting Pakistan-backed terror organisations and for being active over ground workers of terror outfits. Despite being clearly involved in terror-related activities, they have managed to carve out a sympathetic narrative in public by invoking Freedom of Speech and Expression and press freedom enshrined in the Indian Constitution. Thus, the phrase ‘India as Oppressor’ is being extensively used by these media persons in their public discourses.

On the other hand, the patriot faction has also started finding its roots in Kashmir after the abrogation of Article 370. A handful of journalists have started bringing the “Whole Truth” to the fore. This has resulted in a bitter tussle between the two sides.

The recent fighting between the two media factions over the control of a press club once again established the fact that the Pakistani establishment has heavily invested in its media faction in Kashmir. A flurry of tweets from Pakistani journalists, Hurriyat supporters, ISI-backed international diaspora and the official twitter handle of Ministry of Foreign Affairs Pakista (@ForeignOfficePK) stands testimony to their overt and covert support to a particular section of journalists.

Even Press Council of India and the Editors Guild were misled and made to believe a particular narrative of state highhandedness. Being neutral is imperative to honest journalism and unless neutrality is achieved by listening to the stories of both sides, the single story syndrome will prevail in Kashmir.