The odyssey of education in ancient Kashmir 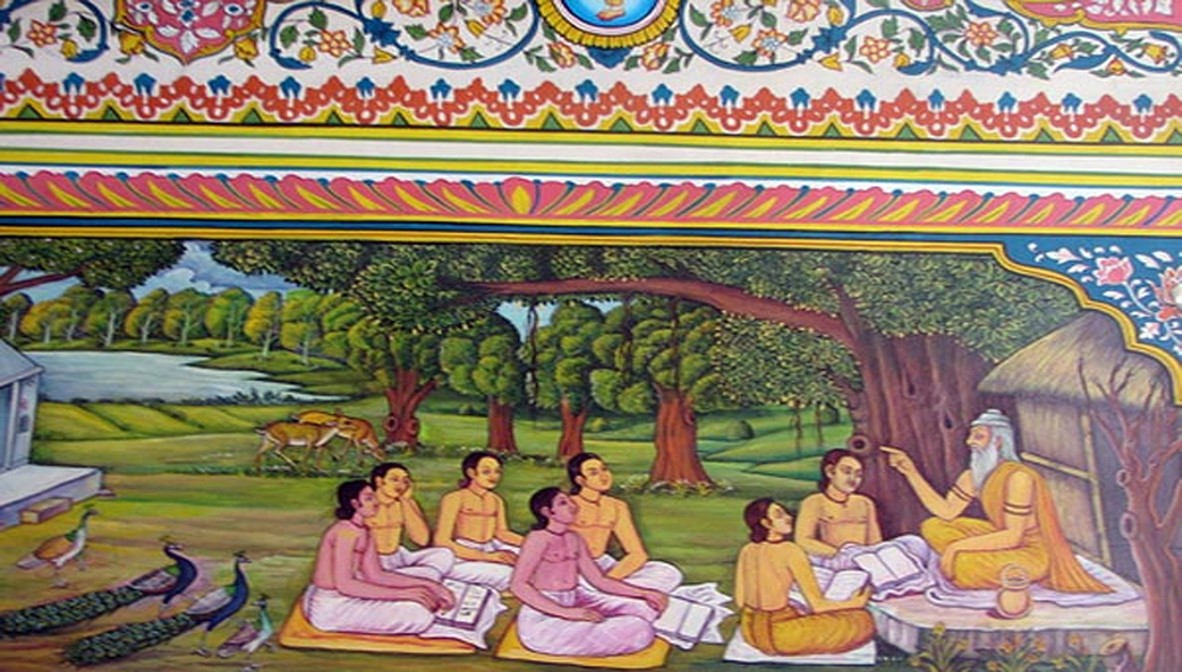 “The foundation of every state is the education of its youth”. This is the golden couplet by Diogenes Laertius, the famous biographer of Greek philosophers. Education is the main pillar of society.

In ancient times, Bharat was a center of higher learning as it is one of the oldest civilizations in the world. From the time of Rigveda onwards, our ancient education system evolved over the period and focused on the holistic development of an individual. The ancient system of education was the education of Vedas, Upnishads, Brahmanas, and Dharmasutras. Bharat presented innovative genius in various fields. There are more than eighty thousand works available in the complete or incomplete form today. These works deal with fields as varied as healthcare to culinary and astronomy to husbandry.

During the pre-Vedic period, the Gurukul, also known as Ashram, were residential places of learning, where Guru and Shishya lived together. While pursuing their education in different disciplines like history, the art of debate, law, Medicine, etc. the emphasis was not only on strengthening the outer dimensions of the discipline but also enriching the inner dimension of their personality. The Gurukuls were situated in forests or open land where hundreds of students shared their lives till they studied. Women too had an access to education during the early Vedic period. Gargi, Maitryi, Lopamudra, Apala, Vishwambhara were a few of the prominent Vedic scholars of the era.

In the later age, the Jataka tales (accounts given by Xuan Zang and I-Quing, Chinese scholars) as well as from the other sources, it is evident that the kings and society took a deep interest in promoting education and as a result, many famous educational centers came into existence. Among the most notable universities were Taxila or (Taxshila ), Nalanda, Valabhi, Vikramshila, Odantapuri, Jaggadala, Those at Kanchi, Benaras, Navdeep developed in connection with Temples and became the centers for Community life.

The land of Kashmir has been a prime contributor in extensively escalating Bharatiya culture across the globe.

As Scottish historian, John Mackenzie, had pointed out in his creation ‘Hindu Ethics’, that “Kashmir (Bharat) has enriched the global code of conduct with its conviction of Dharma, virtue of peaceful co-existence, and belief in the theory of Karma.” In current circumstances, the prevailing disturbances in Kashmir suggest otherwise…

But, it was the reality of ancient Kashmir where people belonging to different religious sects lived peacefully and in co-existence. Kashmir has been an empowered destination of Sanskrit. Many historians and scholars, from across the globe, considered it essential to take education in Kashmir. Chinese travelers Xuanzang and Aukang, who visited Bharat, between 631 CE and 751 CE, have mentioned in their memoir, that no learned person was considered academically mature till he had participated in debates and discourse with scholars of Kashmir. Xuansang further mentions, “People of Kashmir are culturally acclaimed as well as lovers of Education. For centuries, Education and Knowledge have been a matter of reverence and honor.”

Iranian scholar Alberuni, who came to Bharat along with Mahmud of Gazani in 1102, and visited the Punjab region, mentions that “Kashmir has been the most significant Education center of Hindu scholars. Knowledge seekers from far and wide, visit Kashmir to learn Sanskrit and many of them get attracted to the panoramic beauty and scenic landscape surrounding and settle here.”

“The Kashmiri Pundit”, penned by a Kashmiri Pandit himself, Kashi and Kashmir were the foremost centers for learning in ancient India. Kashmir had even surpassed Kashi. It was evident that Scholars of Kashi had to come to Kashmir to complete their education. In present times, during the Thread ceremony of children of Kashi, they are made to walk Seven steps towards Kashmir’s direction.

There was a massive Sanskrit University based in Kashmir Valley, a little away from Srinagar, which was running under the guidance and supervision of Pandit Purshottamji Koul during the Fourteenth Century. Students from across the world would come to this Sanskrit Mahavidyalaya for learning Sanskrit. This center imparted Free Education of Sanskrit to one and all and had been the symbol of Bharatiya culture’s dedication towards seeking Knowledge and Education. Shrichand, son of Guru Nanak Dev ji and founder of Udasin sect, had acquired education from this University. Mughal Prince Muhammed Dara Shikoh had also learned Sanskrit from this university.

Today, Kashmir and ‘Kashmiriyat’ have been colored with impressions of foreign rules and influenced by other religious beliefs. It has tattered its glorious ancient past into bits and pieces but it is an undeniable fact, as true as Sunshine that once upon a time, Kashmir was a Hindu state and Kashmiriyat was a reflection of Hindu culture and its ideology.

In the Northern part of Kashmir Valley, the mountain range that stands tall, on the forehead of Bharat, is called Hindukush. The name itself speaks of its legacy. Patriotic revolutionary, Ashafaqulla Khan, in his painful outburst, had stated, ”मेरा हिन्दुकुश हुआ हिन्दुकश…” (Hindukush means killer of Hindu) Brahma Shikhar, Harmukut Parvat, Mahadev Parvat, Gopadi Parvat, Chandan Van, Naubandhan, Nagparvat, are a few of the mountains and hills in the mountain range of Hindukush and they all echo their Sanskrit heritage.

Kashmir was also known as Satisar. Neelnaga, the first ruler of Satisar (Kashmir) was the son of Sage Kashyap. Well known historian Kalhan, in his creation, Rajtarangini, addresses the river Sindhu as “Uttar Ganga”. Similarly, Neelamat Puran also mentions the river Sindhu as “Uttar Manas”. Not very far away, the ancient holy pilgrimage destination, Nandi Kshetra, now known as Nandkot is situated on the bank of ancient river Kanakvahini,which is known as Kankai. The river Vitasta of yesteryears is now known as Jhelum.

The beginning of the Seventh century witnessed the birth of Islam, from the desert in Arabia.

In the very first century of its birth, Islam was successful in amalgamating number of nations such as Seria, Philippines, Egypt, North Africa, Iraq into “Islami Millat” and speedily ascending the number of Islam followers in Spain, Portugal, South of France etc.

By the middle of the Eighth Century, the Arabs conquered Turkey and Kabul and began capturing Kashmir. But, Kashmir and Kashmiri rulers were made of different mettle. In spite of repeated attempts to win land in Kashmir, the Arabian commanders were defeated repeatedly and were forced to retreat. In 713 CE, Mohammed Bin Kasim was vanquished by King Chandrapeed. In 724 CE, Arabian Commander Hashim’s vigorous attack was beaten by Samrat Lalitaditya. In 754 CE, Arabian Commander Kalif Mansoor was defeated and forced to return back. Mahmud of Gazani too was conquered twice by Kashmiris and he never returned back to Kashmir.

Kalhan in Rajtarangini has noted that “Kashmir can not be won by army and ammunition”.

History is the witness to the glorious saga of the bravery of the Kashmiri Kings. The above-mentioned examples testify to the prediction by Kalhan. And again, history is witness to the arrival of Islam in Kashmir, beneath the disguise of Humanitarianism and global religious brotherhood was the bloody tale of planned strategy of religious fanaticism and conversion. Kashmiri mindset that did not bow down to foreign invaders for 4,500 years became victim of religious clutches of Muslim clergy. When Arabs defeated Sindh, the prince of Sindh’s king Raja Dahir named Jaysinh took shelter in Kashmir. King of Kashmir, welcomed him with open arms and presented him with a manor to lead a dignified existence.

Jaysinh was accompanied by a friend named Hamim from Syria. Hamim was the first Muslim to have entered and settled on soil of Kashmir. Hamim became the owner of his manor After Jaysinh’s death and utilizing his post and status, impacted the spreading of Islam’s philosophy among friends and acquaintances. King Vajraditya, the heir of Samrat Lalitaditya, implemented generosity in governance and allowed the entry of Hamim’s colleagues in administrative posts. This was the beginning of the contiguity of Kashmiris with Muslims. I strongly believe that history is never kind. History can not be undone but past mistakes can surely be rectified.

The Kashmiriyat in ancient era that symbolised Bharatiyata, echoed Virtue that believed in peaceful co-existence but unfortunately their peace loving righteousness was understated as their Weakness and eventually, the large-hearted ‘good’ governance became the monument of our error. Today, when the time has travelled full circle and our nation stands against the similar situation, We can not afford to repeat the emissions. We have made a beginning of retrieving the Golden past but now on every step, the country has to ensure that the integrity of Kashmir remains intact.