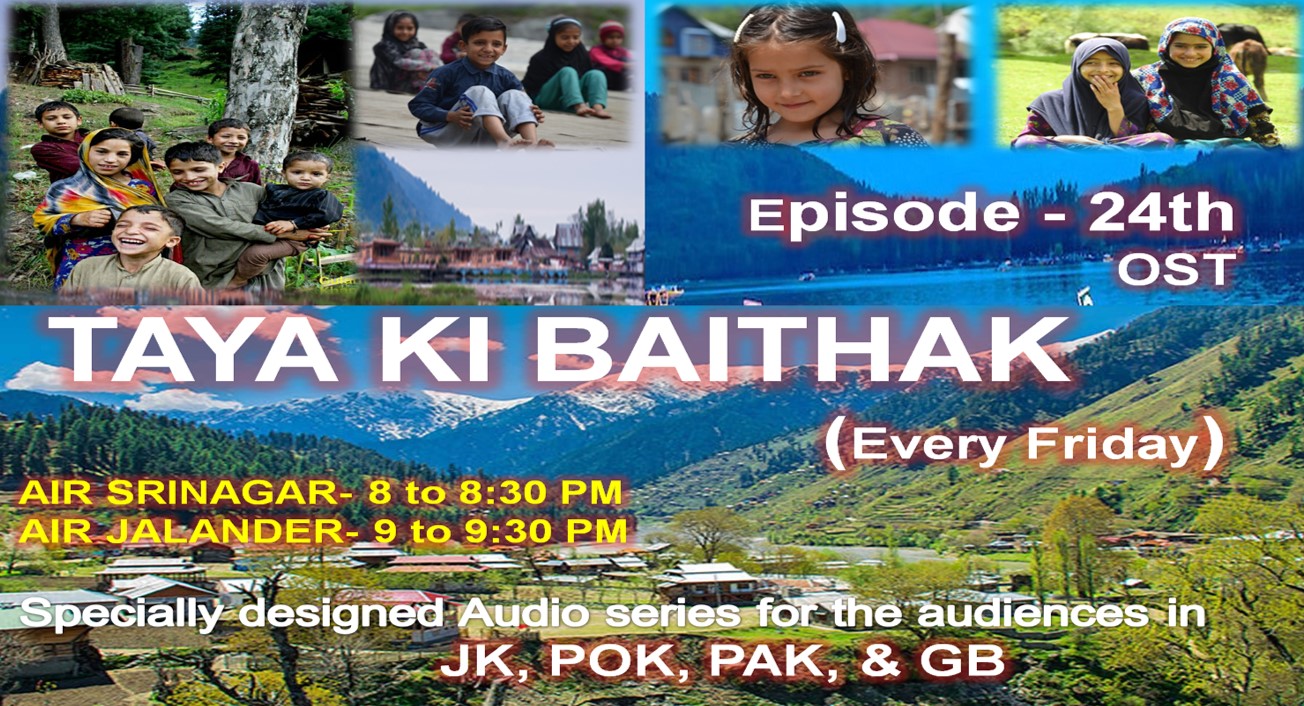 The latest episode 24th of TAYA KI BAITHAK, covers a new line of analysis where Pakistan has also started to expand its horizons over and above the Kashmir agenda.

However, this is not a thing to be worried about as the fabricated charges have not been taken that seriously by anybody. In the past three decades, Kashmir has seen a lot of violence, however, unlike the fate of people in Iraq, Syria and Afghanistan which is pitiable, the state of affairs in Kashmir has transformed for better.

The result of Pakistan’s illegal interference in Afghanistan is evident, while however, the people of Kashmir have seen the development and stability in their lives. Therefore there is no need to overact on the propaganda efforts of Pakistan, as the only target is AWAM of Kashmir which is not gullible at all.

As far as the international forums and UN is concerned, similar false reports have been put across earlier also by Pakistan, which gained no importance whatsoever.

The Foreign Minister of Pakistan, Mr Qureshi has stated about suppression of rights of media personnel in Kashmir, however the irony is that the media is completely suppressed in Pakistan.

Pakistani government violates basic Human Rights by oppressing media. Some media persons of Pakistan have given statements in this episode on this issue. Newspapers are not able to publish the truth and has remained so since the time of General Zia-ul-Haq.

There was also a time when present PM Imran Khan many years back used to make statements to media personnel, that during my regime there will be complete media independence. However, no actions have been seen to empower the media since his coming to power.

Since, 2011 the journalists are fighting for getting the “Journalists Protection Bill” passed, many committees have been formed yet no progress is seen in this front. On the contrary, media personnel have been abducted and many of them have been dragged to court on frivolous charges. On name of Article 19, ban against conspiring or making indecent remarks or making remarks against the state are strangling the media.

Lieutenant General Prakash Menon has stated on the issue that, “Pakistan believes that it can control the situation in Afghanistan then their National security situation will improve a lot, that is why they had supported and augmented Taliban by all possible means, which is not manifested as per their designs .

Also, there is a high possibility that factions of Taliban might spill over to Pakistan through TTP or any other means. Taliban has undertaken a liberation movement which we term as terrorism and Taliban is being guided by Pakistan as Taliban does not have any administrative experience to run the country’s machinery. Pakistan will definitely try to exploit and create the situation of Kashmir and China also, which is with the aim to get mileage”.

Several individuals have given statements that there is a gross suppression of AWAM of Gilgit-Baltistan (GB) by the Pakistani government which has totally defeated the concept of “Azadi” There is no “Azadi” it is a mere word, on ground the AWAM has been totally oppressed and deprived of basic fundamental rights. There is a environment of ‘fear’ and people are being hard pressed by multiple Pakistani agencies present in the GB region.

The region is totally dominated and controlled by the Pakistani Army while the bureaucracy, judiciary is a mere puppet instituted in GB who are not at all functioning in a democratic way. The episode brings out the true picture of a devastated GB, whereas in Kashmir the government and it’s organs have looked out for the youth of Kashmir in terms of education, financial aid, job opportunities and health aid. A case in point is the Indain Army’s “Sadbhavna Operations” which ensures a positive atmosphere to augment the AWAM in every possible way.

Through these projects, the Army has ensured admission opportunities for Kashmiri students in the prestigious “Mewar University” which comprise of hundred seats for online studies and hundred seats for physical admission in various courses with Army bearing most of the cost.

The episode also brings out statements given by the children in GB. One child states that, PM Imran Khan had made many promises during his campaign to reduce the price rise and ensure various facilities, but he has failed on all accounts. One of the poor children remarked that “we might not die of Corona virus, but will surely die of the price hikes”.

This the true picture of the face of puppet democracy and suppression of people.