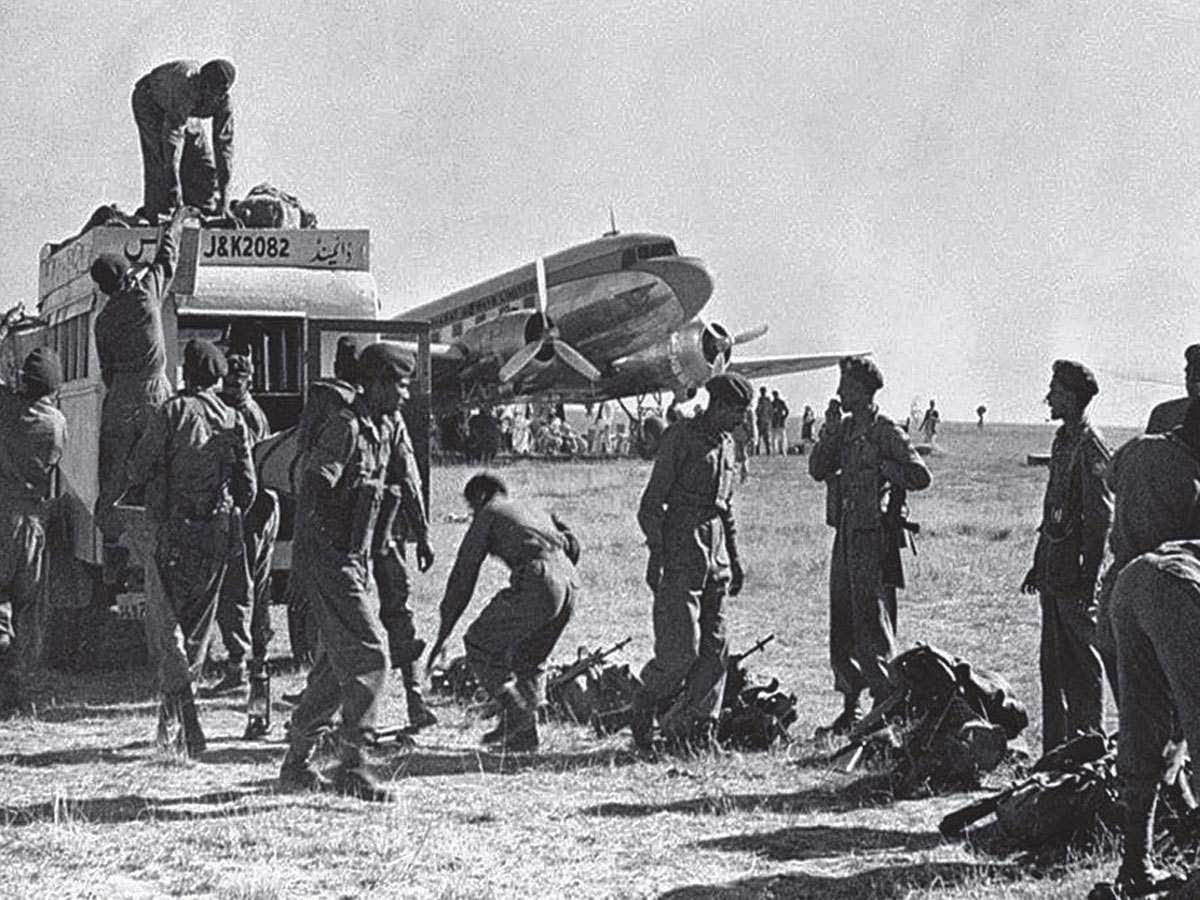 “We are heavily outnumbered… I shall not withdraw an inch but will fight to the last man.” These historic words need to be indelibly etched in the memories of all Indians since they framed the destiny of the nation post-Independence. They were spoken by Major Somnath Sharma, Param Vir Chakra (PVC),Posthumous, on 3 November, 1947, when he, along with his brave soldiers of 4 Kumaon challenged the Pakistani hordes in the historic Battle of Budgam.

The brave troops of 4 Kumaon did not give an inch to the enemy despite many casualties including Major Somnath Sharma who fell to a hero’s death on the battlefield.

Equally motivating though lesser known is the story of Sepoy Dewan Singh of the unit who fought side by side with Major Sharma and exhibited courage beyond the call of duty. He was awarded Mahavir Chakra, Posthumously.

In the battlefront at Srinagar, the forceful stand of 4 Kumaon facilitated the landing of more troops. By 6 November, Indian forces had effectively defended Srinagar from all sides and eliminated the risk posed to the population by the barbaric hordes.

Before the Indian Army landed in Srinagar and opposed the tribal hordes, they had laid waste every living being that came their way. In Baramulla particularly, they surpassed all tenets of inhumanity in a pillage that lasted for four days. The men and children were tortured and killed while the women were raped and carried back as sex slaves. Even the Nuns of the Convent there were not spared; they were raped and killed ruthlessly.

After securing Srinagar, the Indian troops faced a big challenge at Shaletang where the enemy was preparing to launch a massive counter offensive as a last ditch effort to take Srinagar. The brave Indian soldiers, instead of taking a defensive posture, decided to attack and thus was fought the historic Battle of Shaletang.

The offensive was launched by troops of I Sikh, 4 Kumaon, 32 Field Battery and 7 Cavalry, the cowardly hordes of the enemy were taken by surprise and decimated in the short and swift battle, they fled the scene leaving behind their arms, ammunition and 300 bodies of their comrades. Lieutenant NG David and Dafadar Jage Ram were awarded Vir Chakra in this epic battle. Within two days, on 8 November, Pattan followed by Baramulla were recaptured.

These victories were merely harbingers of a conflict that carried on over two campaigning seasons (1947-48) and resulted in the total rout of the tribal and regular forces sent by Pakistan to forcibly occupy the state of Jammu and Kashmir that had legally acceded to the Indian Dominion.

The war witnessed the award of four more PVCs and many other gallantry awards to the brave Indian soldiers who fought against terrible odds. The brave recipients of PVC were Lance Naik Karam Singh, 1 Sikh, in the Battle of Tithwal; Company Havildar Major Piru Singh, 6 Rajputana Rifles, also for the Battle of Tithwal; Second Lieutenant Rama Raghoba Rane, Corps of Engineers for the Battle of Jhangar and Naushera and Naik Jadunath Singh, 1 Rajput, for the defense of Naushera.

Also part of folklore is the bravery of Brigadier Rajendra Singh, Chief of Staff of the Jammu and Kashmir State Forces, who obeyed with his life the command of his Maharaja to hold “the enemy at Uri at all costs and to the last man.” Brigadier Rajendra Singh was recipient of the first Maha Vir Chakra, Posthumous, of independent India.

Any talk of bravery and courageous tenacity exhibited during the war would be incomplete without mention of Brigadier Mohammad Usman. At the time of partition he declined to move to Pakistan despite being given the bait of becoming the Pakistan Army Chief. He did not relent from his spirit of nationalism and continued to serve the Indian Army. He was in command of 50 Parachute Brigade during the war and deployed in the Naushera-Jhangar sector.

When Jhangar fell due to insurmountable odds of the Pakistani attack, Brigadier Usman vowed to take back the strategic location and did so within a period of three months. For his feats of valour and defence of Naushera he was nicknamed “Lion of Naushera.”

Brigadier Usman fell to a hero’s death on July, 3 1948, while defending Jhangar. He was awarded Maha Vir Chakra, Posthumously, and became the highest ranking Indian Army officer to have received this award during the war. His funeral was attended by Prime Minister Jawaharlal Nehru and his cabinet colleagues.

The saga of courage would remain incomplete without mention of a civilian, Maqbool Sherwani, who put in a herculean effort to save Baramulla. When the Pakistani tribal occupation of Baramulla was at its peak and unspeakable atrocities were being committed by them, this daring boy, only 19 years old, went about on a cycle spreading a message that the Indian Army was at the doors of Baramulla.

This information stalled the march to Srinagar and saved the city from a fate even worse than that of Baramulla. When the Pakistani’s realised that young Maqbool had misled them, they shot and crucified him. The young boy, with his courage and presence of mind, etched a place for himself in history for all times.

It merits mention here that the Indian Army fought the war in Jammu and Kashmir with full support of the local population inclusive of the Muslims, Dogras, Sikhs, Buddhists, Paharis and the many other communities who form part of the state. There was not even an inkling of separatist tendencies in that period of time.

There are certain anti-India vested interests within the country and out of it who work ceaselessly to distort history and belittle the sacrifices of the brave soldiers and the many civilians brutally killed by the invading hordes in 1947-48. The truth is that the soldiers of the Indian Army and the people of the state displayed unparalleled gallantry and indomitable spirit in thwarting the evil machinations of a sadistic enemy who was conclusively defeated.