The Great Damagers: Why Pakistan will debate which dictator harmed it more, Musharraf or Zia 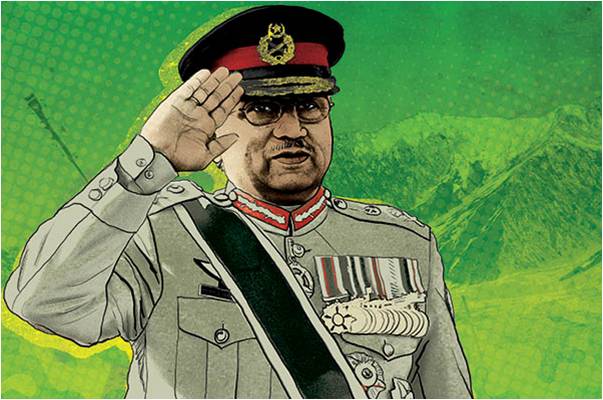 Dictator Musharraf badly damaged Pakistan: Assassination of Benazir, 26/11 attacks in India and the US Navy SEALs raid that killed Osama in Abbottabad. But he believed he was a democrat.

There are three reasons it isn’t yet time to write the obituary of General Pervez Musharraf.

One, modern life support can keep one going for a long time even after many organs might have failed.

Two, he’d ceased to matter in his country and to the neighbours he tormented almost 15 years back, so you might ask if he still mattered.

And three, because the really bad guys, the dictators, and especially uniformed dictators, never really die. They leave an un-erasable legacy of destruction and malevolence.

For how lasting their impact can be, see the permanent damage Zia-ul-Haq has done to Pakistan. Not only did he unseat and assassinate one elected leader (Zulfikar Ali Bhutto), he also laid the foundations of the jihadi mindset.

Even today, the dominant impulse in Pakistani popular politics can be described as ‘Ziaism’. It’s been anything but good for Pakistan, and worse for its unfriended neighbours such as India and for deeply courted friends such as the US. It was thanks to his patronage of militarised Islamists and exportable jihad that Pakistan’s economy and society are in ruins today.

Zia planted the poisonous tree and nurtured it, and Musharraf thought he’d pluck a harvest from it and become a hero in his nation’s history. He ended up, instead, a zero, a convict for high treason for destroying his constitution, handed the death sentence by a trial court and only reprieved later on a technicality. The higher court held that it’s improper under Islamic law to try a man in absentia. Of course, he was absent from the trial because the almighty army had brokered his exile. His life was now reduced to occasional ranting on Twitter or posting his pictures in the in-patient’s livery in some Dubai hospital.

In the past four decades, Musharraf is the only significant Pakistani leader I could not interview formally. To tell the truth, I never asked for one. We did, however, have some public conversations individually and in groups. He is among the vainest and least intellectually endowed leaders ever.

The coup he staged in the fall of 1999 was easy. No military coup in Pakistan has failed—barring the first, the so-called Rawalpindi Conspiracy of 1951, most likely because it was led by Leftists including poet Faiz Ahmed Faiz. For a serving Pakistani chief, taking over power is as simple as sending the boys from the 111 Brigade to the elected leader’s home and collecting the keys. The important thing, which is central to his legacy, is what led up to it.

That year had begun with Atal Bihari Vajpayee’s storied bus ride to Lahore in February, the signing of the Lahore Declaration signalling a thaw. A thaw so dramatic that Vajpayee walked up the steps of Minar-e-Pakistan, a kind of India Gate equivalent, and said that a stable and prosperous Pakistan was in India’s best interest. It was then that Musharraf as the army chief was planning Kargil, precisely to torpedo this process.

He failed in Kargil, his own prime minister called him out, but he was not to be thwarted from destroying that move towards peace. That’s why he convinced his fellow generals, still smarting under the Kargil defeat, to back his coup. Peace over, bloodletting of a kind not yet seen broke out in the Valley. The IC-814 hijack and exchange of hostages with top terrorists, the bombing of the state assembly in Srinagar (1 October 2001), and then the Parliament attack on 13 December 2001, brought his country the closest to war with India it had been since 1971.

After 9/11, he repackaged Pakistan as a stalwart ally of the Americans while at the same time undercutting them by double-dealing with al-Qaeda, the Taliban. He was caught out and not because the Americans saw the light.

First of all, he wasn’t able to control the jihadist forces he’d unleashed. They had become a state within the state and couldn’t accept Pakistan becoming a partner in the American ‘War on Terror’. There were multiple attempts on his life by these faithful but he survived. His end, however, came because of that self-destructive belief all dictators have: That they are actually democrats, and know more about democracy than boring, bumbling civilians do.

Every dictator in Pakistan has tried to bring in his own version of democracy. Field Marshal Ayub Khan called it ‘guided democracy’. Yahya Khan allowed some kind of political activity, even elections, as long as his power would remain intact. Zia experimented with ‘partyless’ democracy after consecrating his position with a sham referendum.

Musharraf, too, added a democratic experiment to his CV, attempted to bring in a new constitution, fought with his top judiciary, and finally lost power to democratic street protests. He was now a far cry from the man who came strutting about so arrogantly for the Agra Summit that even a pacifist like I.K. Gujral said he was acting as if he were a victor coming to a vanquished nation.

By 2007, he was over as a leader. But he’d done enough damage. We saw it in the assassination of Benazir Bhutto, the 26/11 attacks in India and later the national embarrassment Pakistan suffered when US Navy SEALs raided Osama bin Laden in Abbottabad.

To understand a Pakistani military dictator’s main-bhi-democrat delusion let me refer you to his address at the India Today Conclave in 2004.

Asking a question as a member of the invited audience, I reminded him that in that year a very large number of democratic nations were having their elections. So when was he going to hold one in Pakistan?

He got furious. How can you say you are a democracy and we aren’t? It’s an interference in Pakistan’s internal affairs and so on. You can find the exchange in video and print on India Today’s website.

In the week after he took over in 1999, I wrote in The Indian Express that he should be aware that there is only one of three ways a dictator in Pakistan goes: Assassinated by his successor, jailed, or exiled after he started and lost a war with India. So Musharraf could no longer retire to play golf and fade away like good generals. He didn’t like it.

On one of his regular visits to Davos, at an interaction with a small group of editors, he sought me out, sort of wagged his finger at me as we were saying our goodbyes. You Mr so-and-so, he said, you used to be well informed about Pakistani politics. We used to read you in our academies in India Today, he said looking at my former editor, as if seeking endorsement. “But now,” he said, “you know nothing.”

“Because you keep writing there is only one of three ways a dictator goes in Pakistan: Assassination, jail or exile,” he said.

“But sir, look at Pakistan’s history,” I argued.

“Forget history. You make a basic error in thinking of me as a dictator. Ask your friends in Pakistani media, I know all of them. Ask them if they’ve ever had so much freedom,” he concluded that brief exchange.

If he could still review his own life now, he’d admit the boxes he’s checked. Started and lost a war to India, was exiled and dodged the noose only because his khaki ‘boys’ wouldn’t see a former chief hanged.

Musharraf wasn’t 1 per cent of the Islamist Zia was. But in his own way, he’s done enormous damage to Pakistan’s future. Historians will debate for decades which dictator harmed Pakistan most. Zia will have competition.