The Exodus Of Kashmiri Pandits 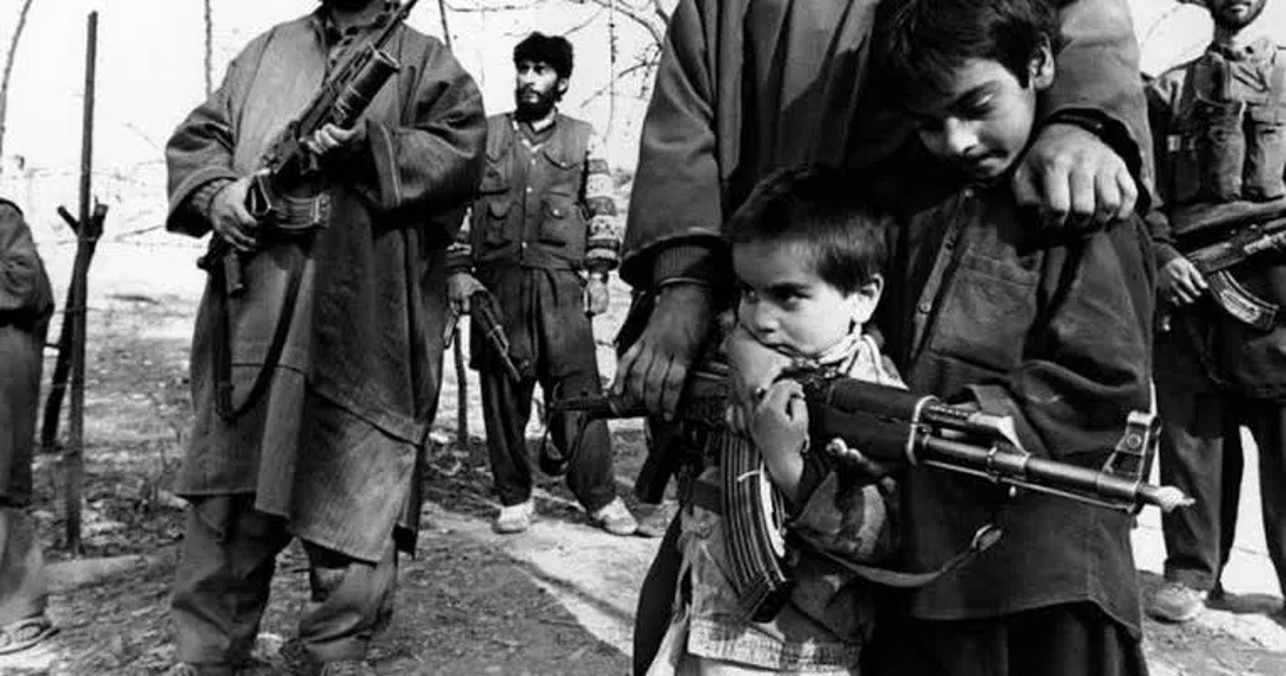 When Dugger Bhats Across Kashmir Emptied Out, A Part Of Us Emptied Out Forever

There are multiple versions about the exodus of Kashmiri Pandits. I feel surprised when I see many fellow Kashmiris taking positions on the social media that somehow the Pandits were responsible for the exodus or the government was responsible or the Governor of that time was responsible. Now many youngsters have also started believing one or the other of these versions. Perhaps not owning up to our failures makes it easy to deal with them. Whatever the reason, by taking these positions we whitewash a very sad and ugly part of Kashmir’s history. Whatever platitudes we may come up with to explain the Pandit exodus, those who lived through those times know the truth, and these truths cannot be denied.

DUGGER BHAT, THE BEAUTIFUL PANDIT VILLAGE NEAR MY VILLAGE

There was a Pandit village close to my village in Kupwara district. It was called Dugger Bhat. My own village is Vilgam. Dugger Bhat was a beautiful village. Two streams passed through it. There were beautiful Chinar trees on both sides of the path leading to the main road. My favourite teacher lived in this village. His name was Sri Mohan Lal. After the exile, he resides at Bohri, Jammu with his wife and three sons. We often went to Dugger Bhat because some of my classmates lived there, and they were my good friends. I still remember their names. Prince, Fency, Bia and others. They were brilliant in studies. But for me and my other friends, the real reason to go to this village was to meet Pran Nath and Hadie Nath. Both were postmen. Their full names were Pran Nath Bhat and Hadie Nath Bhat. But we called them Pran Nath and Hadie Nath, and waited eagerly for them to get letters for our family.

THE JOY OF LETTERS

My father and other men of our village used to go outside the state for shawl business. Telephone was a rare luxury those days. It was limited to the cities, to government offices or the residences of very senior officers. For us, a postal letter was only medium to get information of the well being of our family members who had gone out for work. We used to feel limitless joy whenever we see these postmen visited our village. We used to follow them and ask them again and again, jumping with joy: Don’t you have a letter from my father? In the movies, we used to see that the postman used to come on a bicycle. In our mountain region of Kashmir, our postmen used to come walking to the village with bags full of letters. The visit of the postman to the village was a minor celebration. Every kid of our village would be jumping about around the postman. Kids would follow them laughing. We used to call them Pran Nath and Hadie Nath as if they were our age. After every two or three days, we used to go to the two postmen and ask them for letters from our family members. The postmen were always full of good humour. They would smile while saying yes or no. Perhaps they also enjoyed this frequent play with the boys.

THE YOUTH STARTED GOING TO PAKISTAN FOR ARMS TRAINING

I remember that it was around 1990. My father was in Punjab in connection with his business. We started hearing that young men were going to Pakistan for arms training. We still used to visit Dugger Bhat, the Pandit village, for letters. But now I could see that Pran Nath and Hadie Nath looked fearful. It seemed to us that both the postmen had stopped coming to our village with any postal material. Perhaps they knew that some youth from my village also had gone to Pakistan for arms training. One day, a large number of people from our locality gathered on the road. They were shouting slogans of Hum kya chahte azadi.

They moved on the road leading to the main market of Vilgam. They also passed by the road where the Pandit village Duggar Bhat was situated. I saw that the azadi-pasand protestors started shouting the slogans loudly and belligerently when they reached near the Pandit village. I was a student of Class 7 at that time. I and my friends had no idea of what was going on. I felt confused and wanted my father to be there near me, but he was outside the state. I saw those men raising slogans in a threatening manner, like they were trying to intimidate the Pandit families. I thought of Pran Nath and Hadie Nath. Were they feeling scared, I thought. I felt sad and concerned for them.

THE MAN WHO CARRIED A KALASHNIKOV

A few weeks after that, one fine Friday I was going to the mosque when I saw hundreds of people of my village surrounding a handsome man. They all seemed to be in awe of him and were looking at him respectfully. I went into the crowd to see who the man was. I heard people around saying that he is a Mujahid. The men were saying he has a Kalashankoof. I did not know what is a Kalashankoof. It was a new word for me, but the men were saying it and were looking at him with great admiration. Much later, I learnt that the word Kalashankoof that I had heard was the Russian automatic rifle Kalashnikov, a highly potent killer. The man whom the villagers were surrounding with great esteem was none other than Master Yousuf Dar. He was the first man of our area who had returned from Pakistan after arms training. Later we came to know that a group of five men from our area had gone to Pakistan and had returned with what was called as Kalashankoof. For us children, life largely remained the same. While we were out for our tuition classes in Vilgam, I and the other boys would continue to go and meet Pran Nath and Hadie Nath to check whether they had letters for our family. I used to feel excited as we walked to their village, thinking that my family members would be delighted that I got my father’s letter home.

News spread that young men from our area had taken arms training from Pakistan and had brought Kalashankoof with them. A section of villagers became aggressive in their attitudes towards the Dugger Bhats. What was the impact of all these developments on the Dugger Bhats? We all called the Pandits of Dugger Bhat that way. The impact was that after some weeks, Dugger Bhat emptied out. All the Pandits left their ancestral village. Their going away fills me with sadness to this day. I did not come to know of the departure of Pran Nath and Hadie Nath the day they went. Or I would have gone and met them and hugged them. Perhaps I would have cried. One day I and the other boys saw some trucks standing outside Dugger Bhat. So many trucks standing together was a surprise. But it was not our concern to verify about the trucks, so we went our way. The next day we came to know that whole Pandit village is empty. Everybody living there had gone to Jammu in those trucks. Many men and women of our village including members of my family said the Dugger Bhats have gone to Jammu for a short while only. They will be back.

EVERYONE THOUGHT THE DUGGER BHATS WOULD COME BACK SOON

I felt happy every time that I heard that the Dugger Bhats would be back soon. Pran Nath and Hadie Nath had also gone to Jammu. For many years, I and the other boys kept waiting for the two postmen and our Pandit childhood friends to come back. Growing up together, my friends and I would discuss them sometimes. We would wonder why they aren’t coming back. We felt sad every time it seemed to us that the Pandits of Dugger Bhat would never come back. Then other postmen were deputed to deliver letters in Vilgam. But our childhood heroes were Pran Nath and Hadie Nath, around whom we kids would jump and dance with joy. We would run in front of them, we would run behind them. Many times, my friends and I would innocently discuss that we should search for Pran Nath and Hadie Nath in Jammu and ask them to come back. But all these years, militancy kept increasing in the Valley. All of us felt terrorized.

WE SHOULD HAVE STOPPED OUR PANDIT BROTHERS FROM GOING AWAY, BUT WE DID NOT

Some weeks after seeing the men with the Kalashankoof, we started seeing more and more of the Army in our town. We saw Army soldiers with guns. We saw policemen with guns. Seeing so many soldiers and policemen in our town was a strange feeling. Sometimes we would hear gunshots from encounter sites. Many times we would hear that so and so person is a militant, or so and so person has gone to Pakistan for arms training. Life did not seem so light and carefree any more. During these years of terrifying violence in the Valley, my friends and I continued to remember the Dugger Bhats. Walking through our village many years ago, we had heard slogans against the Pandits. But we did not know the meaning of those slogans. We did not know the outcome of those slogans. It was not just our Dugger Bhat that emptied out. Dugger Bhats across Kashmir emptied out. In the later years, my friends and I realized that a big part of Kashmir had emptied out. A big part of us had emptied out. Prince, Fency, Bia and others. All of them had emptied out of Kashmir. The youth and children of today do not know what it was to lose Prince, Fency, Bia and the other Pandit boys. They do not know what their loss meant to Kashmir.

Many youth of today talk of conspiracy theories in the exodus of the Pandits. On Kashmir’s social media, they talk like they know it all. They talk like the Pandits were responsible for their own exodus, or the Pandits had engineered their own exodus. As I write these words today, my heart feels heavy. We who stayed behind know what the loss of teachers like Sri Mohan Lal, Pran Nath, Hadie Nath, Prince, Fency and Bia meant to Kashmir. I was a student of Class 7 when the exodus of the Pandits happened. But I now know that we as a society could not protect them. We could not give them a sense of security to stay on. Our elders did not stop our youth at that time from raising slogans against Pandit brothers. We should have stopped our Pandit brothers from going away, but we did not.