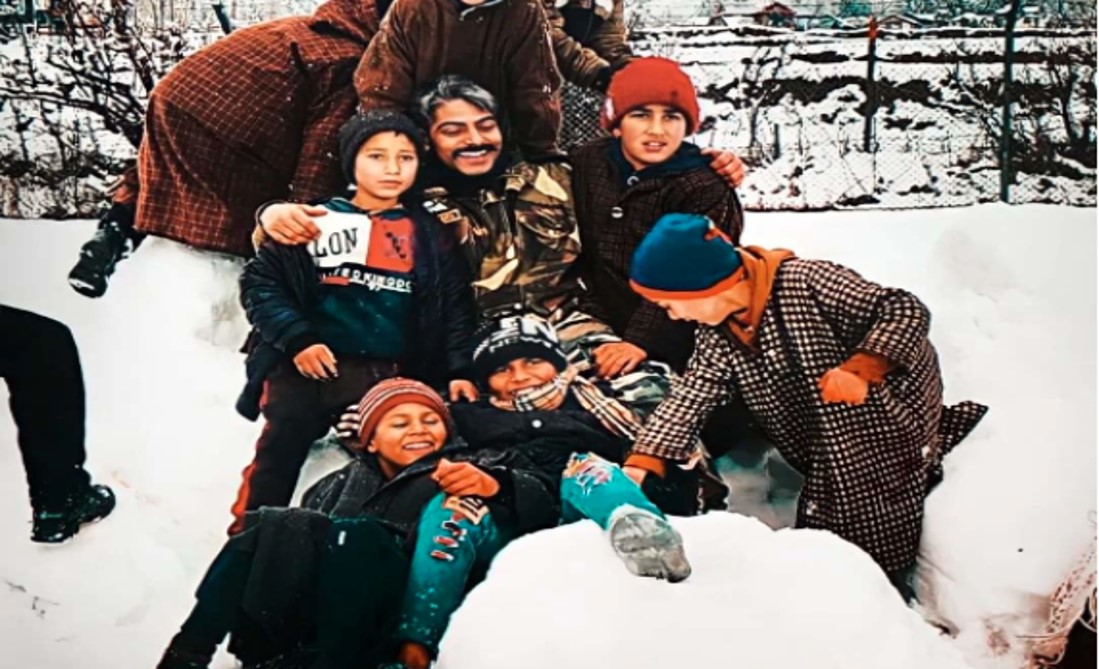 ‘Fifty years ago I read a story about a little snow white and the seven dwarfs! The story was all about wilderness, poisonous intentions and a little girl. But after seeing this picture I came to realize that children are to be loved and the Indian army loves them! Amongst the eight in the picture all smiling but the biggest one is behaving like a dwarf though a giant in all respects a man from the Indian Army.’

‘Snow White is said to be one of the fairest and kindest princesses ever depicted in fairy tales. Her story originated from a German fairytale that narrates her tragic life after being killed by her evil and jealous stepmother, whose magic mirror continually tells her that Snow White is the fairest of them all. But in the end, she finally gets punished, and Snow White gets to live her life happily ever after.’ I just got an idea because snow and Kashmir are synonymous. The most beautiful of places was set on fire by idiosyncrasies of some men sitting across the country, across the LOC and International Borders.’ Need not stress, Pakistan was the country.

‘This is one of the best pictures that the Northern Command India sent to me. This story struck me in the afternoon when I was working on ten others, But I kept the photograph registered in my mail, Now when I reached home I began it, I mean the story hopefully the end result would be palatable to the readers because this is an imaginative creation’.

‘If only I had a child with lips red as the rose, hair black as ebony, skin white as snow, that’s a dream of every mother. Soon a mother living in a snowy mountainous region had a daughter who was as white as snow, and as red as blood, and her hair was as black as ebony, and she was therefore called little Snow White. But that was a reality. Snow White was growing up, and grew more and more beautiful, and when she was seven years old she was as beautiful as the day, and more beautiful than the queen herself.’

‘’Oh, heavens, oh, heavens,’ cried they (the family members, ‘what a lovely child.’

‘Beware of your stepmother, she will soon know that you are here, be sure to let no one come in,’ said one of the seven dwarfs. Another one said, ‘Oh, queen, thou art fairest of all I see, but over the hills, where the seven dwarfs dwell, Snow White is still alive and well, and none is so fair as she is.’

‘She went over to the hills beyond the seventh mountain to the seven dwarfs, and knocked at the door and cried, ‘Pretty things to sell, very cheap, very cheap.’

‘The readers may be wondering as to why I started like this because I have used Snow white as a l Kashmir, the giants who at times in fact every time true like to get into the skin of children and make them laugh even in the most wretched of circumstances, the evil queen is Pakistan. The children in white snow in the interiors understand it but there are still a few grownups who do not that is rather unfortunate.

‘By the way, Snow white ends up leading a happy life, just like her wish. Snow White is a Disney princess that everyone loves to watch, especially on one occasion, birthdays. ‘If only I had a child with lips red as the rose, hair black as ebony, skin white as snow,’ are said by the Queen, not by Snow White. The child was Kashmir and the mother, ‘Mother India’. It’s going to be one great story. India will never let the princess off the hook and Pakistan will never get it and that is a period.’

‘From that hour, whenever Pakistani politicians and generals looked at the map on the globe, their heart heaved in their breasts, they hated the people of Kashmir so much.’. Why it is not known but one thing is definite they fought not one but five. Terror still remains but that too would be snubbed off.’

The picture is from somewhere in the interiors of Kashmir where snow has covered everything and these kids are rolling and rollicking. The Indian Army is the people’s army who are loved by the children. The bond between the children, officers and men is huge and these children are Nation’s children meaning that they are their own. So let the smiles and the thumbs up insignia keep moving and let the warmth of love persist. It will as the time unfolds its pages. The ultimate destination of calm, peace and tranquility is not far off. It could not have been with the Indian Army leading the way and that too as always from the front these men in uniform reach where no one else can

These children in picture will grow and they will understand one fact which is being taught to them today and that is, if you will take care of your own house, cook, make the beds, wash, sew and knit, and if you will keep everything neat and clean you will stay always healthy and wise. But along with all this you will have to move ahead with time. Yes the experiences of the past have been misery ridden but it is better to start all over again from where you lost the way Somewhere you all did because of those who never wanted Kashmir to be a snow white’

Poor little Snow White (Kashmir) had no suspicion, and let the old men do as they pleased, but hardly had Kashmiri children of that era realized the poison that Pakistan unleashed took effect, and the Kashmiris fell down senseless. I do not have to tell who gained in Kashmir and who lost The children of the modern era had to win and they are by all means!