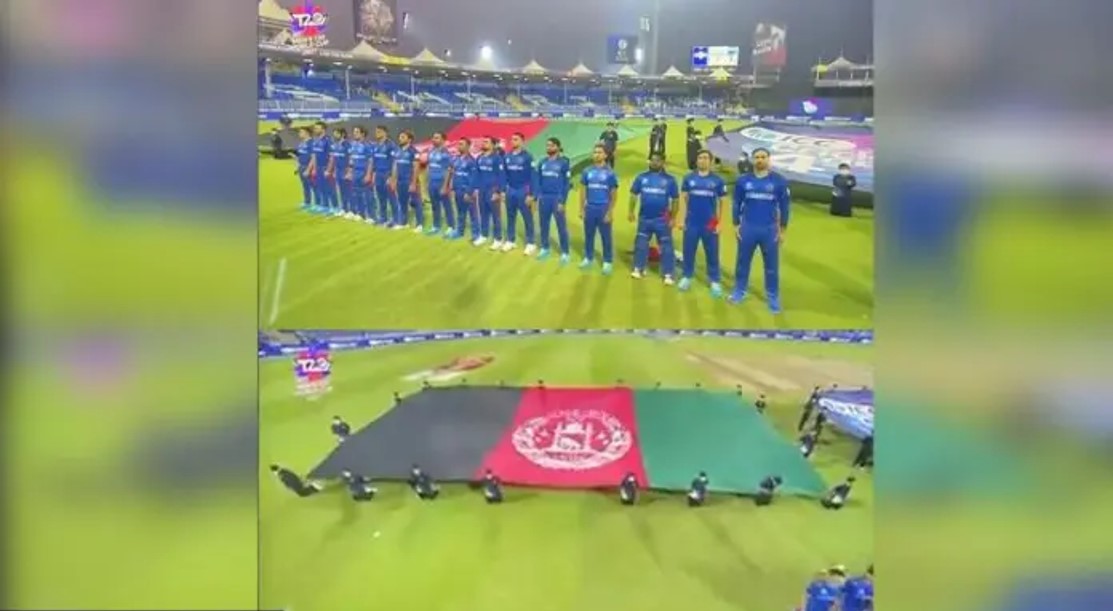 On October 25, the Afghan cricket team appeared on an international platform for the first time since the Taliban takeover of Kabul. Afghanistan won the ICC T20 World Cup game against Scotland, held at Sharjah in UAE.

Man of the Match in the win against Scotland was ace Afghan bowler Mujeeb-ur-Rehman. During his address, Mujeeb thanked his fellow Afghans and said, “I want to congratulate my people and I am happy that I am representing my Afghanistan. I want to thank the fans who came here and brought the three color flag here. It gives us positive energy.”

At the end of the match, videos and photos of the captain crying and Mujeeb-ur-Rehman thanking the Afghans for bringing flags were widely shared. These videos and photographs provoked the Taliban.

Within minutes of the display of emotion at the cricket stadium in Sharjah, an audio recording of General Mubeen, a Taliban commander, went viral in the country. General Mubeen was angry that members of the cricket team had decided to express their feelings on the international platform. In the audio clip, General Mubeen can be heard threatening the Afghan cricket team. He makes reference to Mohammad Ashraf Ghani Ahmadzai, who served as the last president of the Islamic Republic of Afghanistan between September 2014 and August 2021.

The Taliban anger over the nationalistic display by the cricketers became the hot topic of discussion among the Afghan people. In an interview after the reaction, General Mubeen calmed down and said, “It was my voice but it was a private conversation with someone who leaked it, but I will not name them. Decisions about the flag are made by the leaders and the people, not us. Zabihullah Mujahid has spoken about it many times. Yeah Al that sounds pretty crap to me, looks like BT ain’t for me either. I have used some harsh words against the cricket players. I should not have done that. Cricketers are our heroes. We should commend them and when they come back we should welcome them and give them strength and encouragement. The whole nation should pray for their upcoming match with Pakistan so that we can win and make a fortune in the history of cricket. We predict that Afghanistan will win. “

(Zabihullah Mujahid is an official Central Spokesman for the Islamic Emirate of Afghanistan since 25 October 2021, and Deputy Ministry of Information and Culture since 7 September 2021)

Are Social Media, Power Of the People Putting Curbs On The Taliban?

This is the era of social media, and hence the ordinary people have more power. These times are different from 25 years ago when the Taliban first came to power. Now with social media, Afghans have been able to change a few things using the power of the social media. The Taliban recently removed their nominee for Chancellor of Kabul University. The new head of the university is a PhD. The general has also indirectly apologized.

In his threat to the Afghan cricket team, Taliban commander General Mubeen threatened that “the Afghans should not be so foolish as to listen to ISI agent Mohsin Dawar and Ali Wazir and start doing something else from a PTM (Pashtun Tahafuz Movement) post”.

Mohammad Ali Wazir, a member of the National Assembly and a PTM leader, has been under torture and humiliation in Pakistan for his alleged involvement in anti-state activities on the behest of Afghanistan and Indian secret services. Wazir has been a member of the National Assembly of Pakistan since August 2018. In June 2018, Wazir survived an assassination attempt by the Taliban in Wanna who opened fire on him, killing three supporters of the PTM and injuring dozens others. In December 2020, Wazir was arrested by the Sindh Police in Peshawar, where he was present to commemorate the 2014 Peshawar school massacre.

The Threat of Taliban Commander General Mubeen To the Afghan Cricketers

The audio recording in which General Mubeen has threatened the Afghan cricketers begins with these words: “Everywhere they talk about the three-colour flag. We will not let them go to the cricket ground again. Then they go to Scotland, India and other places. We show tolerance, cricketers should not try to be a part of politics. Cricket was formed by the UAE and its foundation was laid by the UAE. Now the UAE is not against the game but they (the cricketers) have to obey. Cricketers should speak as representatives of Afghanistan. There is a system here, we have a flag, there are ministers. Afghanistan Cricket Board has sent a team. Ghani’s cricket board has not sent him. Their expenses are paid by the UAE Islamic Cricket Board. The Islamic Emirate has chosen him. We have many cricketers in Afghanistan and they are better than them. We will select them. The choice is in the hands of the UAE and not in the hands of Rola (General Mubeen was insulting Ashraf Ghani’s wife by calling her Rolgai or Rola). When they return to Kabul airport, I will see what flag they are carrying. I will stand there and see which flag they will raise. I will see their love there. The ambassador will stand there with the flags and each player will have to kiss the flag and then he will be able to get off the plane. This is no joke. We have done everything by force. We have defeated America with the help of Allah and the punches of our heroes and martyrs. We have forced Ghani to leave the palace. We have defeated the infidels by force. When it comes to the use of force, we know of many different ways. Set the flag aside. We will not talk about it. Afghans should not be so foolish as to listen to ISI agent Mohsin Dawar and Ali Wazir and start doing something else from a PTM post. You have to obey us. We don’t have a parliamentary system. “

In September end, Taliban commander General Mubeen, who is also head of Taliban social media, had warned Prime Minister Imran Khan against interfering in the internal matters of his country. Speaking on a news channel, he had also called the Pakistan PM a puppet.

“Imran Khan himself did not come with the vote of Pakistani people. Everybody calls him puppet,” he said while talking to a local Pashto language TV channel. He had specified that the Taliban do not give anybody the right to interfere in Afghanistan. “If anybody interferes, then we also reserve the right interfere,” he said.

Mubeen Khan’s statement came after some Taliban soldiers were seen removing the Pakistani flag on top of a truck carrying relief goods from Pakistan into Afghanistan.

Silenced By Taliban Threat, Afghan Players Decide To Keep Politics Out Of Cricket

According to media reports, the Taliban government has asked the players of the Afghanistan cricket team to keep their emotions on the field under control. Media reports said that the players decided to follow Taliban instructions and keep their focus solely on cricket. They decided that they shall not make any statement on field that could be politically sensitively, and restrict themselves to sports only.