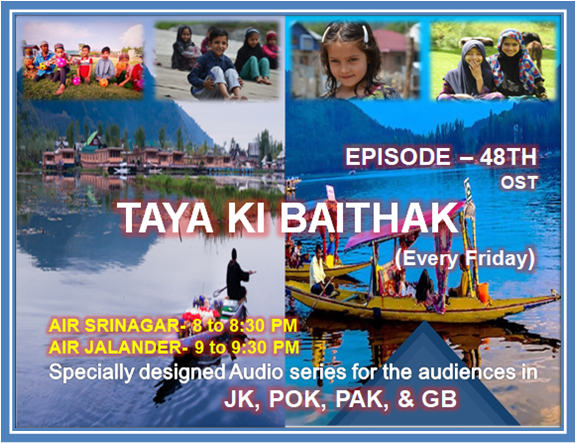 Taya Ki Baithak episode – 48 Pakistan’s anti India stance has brought a lot of disrepute to them as the influence of India as an emerging world power has spread all over the world. In it’s resolve to mitigate the suffering of its neighboring nation India is an active partner in the development and advancement of these nations.

That is why India has heavily invested in the rebuilding of a war torn, Afghanistan by sponsoring multiple projects of public welfare and importance there. This provoked Pakistan to sabotage these activities. Pakistan’s crooked approach can also be judged from its participation in UN food prog by sending inedible wheat to Afghanistan. This has invited a lot public resentment and anger. On the other hand Indians whole heartedly sent humanitarian aid to Afghanistan which is appreciated and acknowledged at large.

The firm grip of establishment on the system of governance has given birth to many evils and the wrong policies adopted at various levels have created a state of turmoil in Pakistan.
Pakistan as an extension to it’s policies is continuing to inflict atrocities on the people of PoK and POGB.

Imposition of huged taxes, non representational policies in the system of governance and denial of basic rights has incited violence in this region and the voices of freedom have become louder.

Contrary to the polices of Pakistan with regard to PoK a new dawn of progress and prosperity is emerging in J&K. Infrastructure developments, creation of jobs and dependable income generating units is aimed at guaranteeing the space in the sector of socio – economic development for the people.

Being part of a larger democracy the youngsters of Kashmir are progressing and carving a niche in every sphere and their hardwork is making them scale new heights. Sadia Tariq the gold medalist of Wushu championship is a living example of an inspiring success story