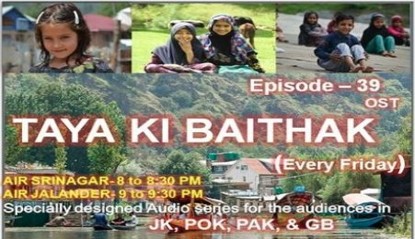 Taya ki Baithak Episode 39 shows Pakistan’s policy of instigating trouble for its neighbors through religious fundamentalism has become a thorn in its own side as it is faced with similar problems from within.  This is very much evident from the alleged actions by TTP in areas like KPK and Waziristan. When terrorist groups like TTP were forced out of Waziristan, they took shelter in Afghanistan. Today they are exerting pressure from Afghanistan. Despite fencing of the Pakistan-Afghanistan border and establishing 1400 odd posts on the border, cross border movement continues. People move across the border with the help of refugee cards or valid visas.

Approx 35 lac Afghanis are in the refugee camps in Pakistan. Some of these refugees have been in Pakistan since past 40 years. Each camp holds refugees to the strength of 1.5 to 3 lacs. These camps are breeding grounds for terrorist sympathizers and sleeping cells. It has become impossible for Pakistan to keep a check on these camps. There has been a marked increase on terrorist attacks on the Pakistani armed forces and police. In first 9 days of Aug 21, 10 Jawans were killed. Earlier Taliban was carrying out these killings. Now they have created local cells which have become active.  Each such group consists of 25-30 persons who work locally. FATA, North  and South Waziristan, Peshawar – all these areas have been infested by such local terror groups. These groups function independently and easily target the police and security forces. The Taliban is trying hard to ensure that the civil population is not targeted so that they have their sympathies.

It is the avowed policy of the deep state of Pakistan to fund terrorism in J&K through narcotic trade. Besides generation of funds through direct cultivation of drug  yielding crops, effort is also on by ISI to compel or entice the youth of  J&K into consuming and getting addicted to drugs. In the past, it was a common feature to discover drugs and fake currency on the terrorists being killed in encounters. These drugs fetch good money from places   like Mumbai. Fake currency is primarily to destabilize the economy of India. Besides this, money for terrorist activities also flows into J&K through Hawala from places like Dubai. Funds are also diverted to sympathizers and politicians who continue the narrative of Pakistan in J&K.

Despite all the efforts of Pakistan to de-estabilise J&K, the UT is on a path of progress and development. Umran Malik, a cricketer from J&K has been selected as a player for Sunrisers Hyderabad in IPL. His parents always cautioned him against joining anti national forces and advised him to concentrate on cricket. He has been a fast bowler from the beginning, and has risen to the present position through dedication and hard work.