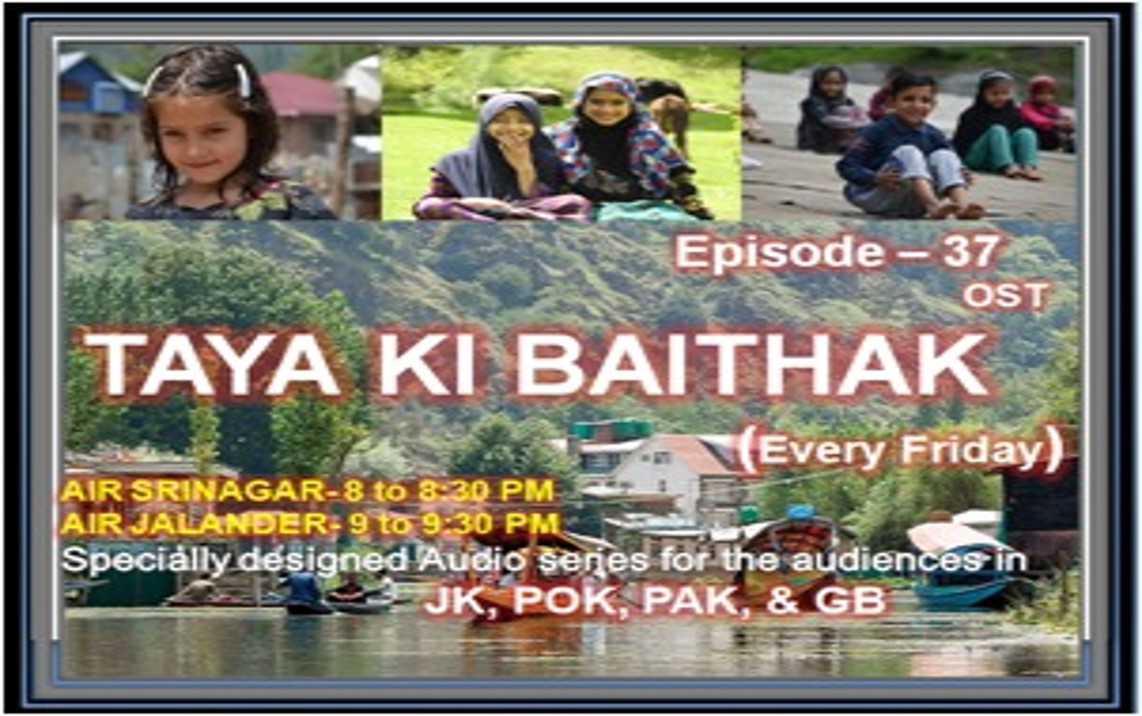 Episode 36 of Taya Ki Baithak explains that the terror infrastructure in Pakistan remains intact. And the world appears to be turning a blind eye to the same. Pakistan’s involvement in various terror activities have been brought to notice of world from time to time. Its regions adjoining the IB/LC are the bases for terrorists. However it is opined that Pakistan is no more able to sustain fostering of terror activities due to its economic crisis. India has already emerged as a strong political power and has a solid standing in the eyes of the world. Pakistan due to its bad deeds has reached this state of decline. Jehad was a pretext to force India to indulge in dialogue with Pakistan. J&K was part of India even before partition. Pakistan has created a mess in J&K region and GB is a live example of the same.

Pakistan always gives solutions to the J&K problem which they know are not implementable. For instance, they insist that India remove its armed forces from J&K. Instead, they will be more successful if they seek negotiations. Pakistan’s claim that the youth of J&K are taking up arms spontaneously is fake. No youth becomes part of a crowd/mob on his/her own. The youth are being manipulated into such anti-social activities. The political scenario in J&K involves mainstream political parties, separatist parties and the fundamentalist elements. Fundamentalists do not have any historical background. They have surfaced a result of planning and funding of their activities. If the funding is stopped then the fundamentalism will vanish. Pakistanis have a wishful thinking that Kashmir will be an independent country one day. However, a certain section of them want it to be part of Pakistan being Islamic nation.

Hopefully the neighbors will now understand that nothing much is to be achieved by instigating separatist activities in J&K. People of J&K are busy planning bright future for their children.

Baloch have become outsiders in their own country. The ordinary Baloch is said to be annoyed. This is because of the atrocities by the Pak govt on them. Excesses have been a common feature in other provinces like Sind as well. Baloch people have been labelled as traitors and enemies by the Pak establishment. Many Baloch persons have gone missing.

Baloch people are aware of their unique identity and want to continue their struggle to maintain/retain that identity. There’s a long list of missing persons in Balochistan. There’s a strong protest against the establishment in Gwadar area as they have been deprived of a livelihood. CPEC is likely to have serous consequences for Pakistan. CPEC is said to be an important part of Belt and Road Initiative of China but its implementation is fraught with delays and complications. China has promised to start projects worth $50 billion . This is to be utilized for energy projects, infrastructure development, development of commercial areas and transportation projects. CPEC is to start from GB but the local populace is convinced that they are not getting their due share of the projects. The CPEC deal is not transparent and people are not aware of the status of GB in this project.

Electricity to each household is bringing peace and prosperity in J&K. It must be acknowledged that there has been marked improvement in the condition of J&K. Great stress is being laid on meeting the aspirations and needs of the locals. LG Manoj Sinha says that the project of AIIMS in Jammu has progressed substantially. First batch of students are presently studying in Rishikesh and will move to Jammu for further studies shortly. Work on AIIMS in Srinagar is likely to start soon. In addition, new medical colleges have been established in J&K. Work has been completed on various tunnels and the roads being constructed are something not seen in J&K earlier. The gross enrolment ratio of female students has crossed 50%. Of this 50 % or more, more than 10% belong to the poor families. 13 different scholarships are being given to the girl students so that they come forward in streams such as science, engineering, IT and humanities. J&K admin will give 75 scholarship to girl students from poor families for higher education. To strengthen the girl students, no fees are being charged to them while studying in classes up to 12th in govt schools. 88 Kasturba Gandhi Balika Vidyalaya have been established in remote areas which have led to reduction in gender gap.