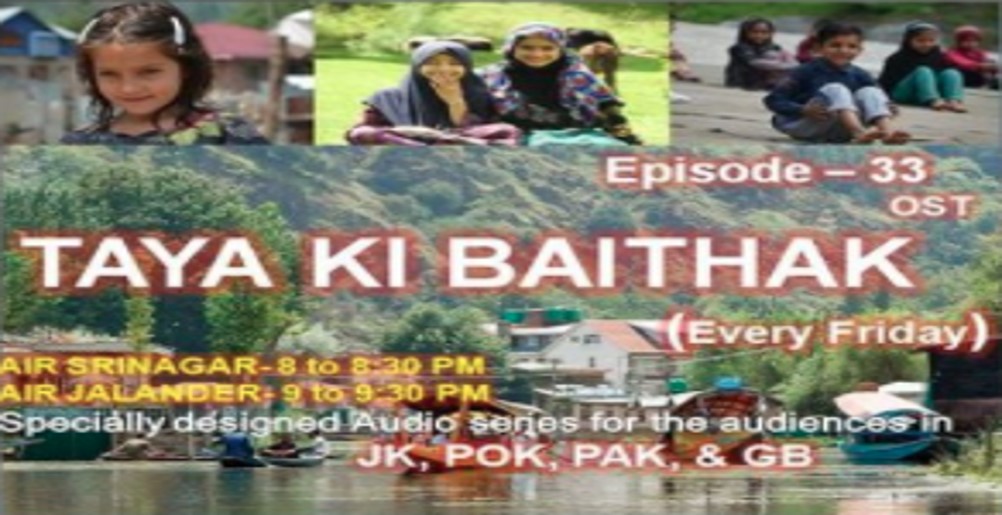 Taya ki Baithak episode 33 shows Terrorism, insurgency and sectarian killings in Pakistan are mere symptoms. Actual problem is intolerance and extreme religiosity. This is the most dangerous problem facing Pakistan today. The intolerance is towards people holding a contrarian view. The desire of the establishment and the indoctrinated people is to curb or finish their right of expression. It has other different forms like discrediting your opponents, defaming them. This type of indoctrination has been going on in the country for long. Even if one comes across a contrarian view one is expected to refuse to acknowledge it. Pakistanis have to agree to exist peacefully. Otherwise they are doomed.

Religion has been used as a weapon in Pakistan. Pakistani passports are suspect over the world. Religious approach has been used by the government to foment hate. This has led to suspension of economic aid also. Educating people also appears to have no effect. Extremism was initiated in the eighties and can be countered only by counter narrative. However, the initiative and drive has to come from the ruling disposition. The civil society alone can do little.

Episode 33 Religious extremism has led to decline of the civil society in Pakistan. To the extent that people are deprived of basic needs like food. Despite that, Pakistan has started fomenting trouble in J&K again. On one hand Pakistan claims peace and prosperity in PoK and GB and on the other it is trying to disturb the peace in J&K.

Pak government is suppressing the voice of the people in PoK and causing human rights violations. Innocent people should be freed after taking back the cases of terrorism against them.

Step motherly treatment is being given to people of GB. They should be treated at par with people in Sind, Punjab etc.

No benefit of the hydel projects in PoK has been given to the locals. On one hand, donations are being collected for the construction of dams while on the other, the people are being deprived of basic necessity like water. Water of Neelam and Jhelum has been denied on the pretext of their ownership having gone to CPEC.

Episode shows Education can become the bedrock of growth and happiness in J&K. Indian state govt in J&K has completed the task of creating a youth club in every panchayat. One of the aims of the club is to infuse a new awakening in the youth by providing suitable environment to them. Many members of the youth clubs are students and they can bring about a total change in the environment in J&K. In the recent past, considerable efforts have been made to reduce the gender gap and to reduce the drop out rate. 2000 kinder garden schools have been established and 3500 schools shall be started from next academic session. 23112 schools now have clean drinking water, sanitation and electricity connections. 4000 eco clubs have been established for eco-friendly activities. 57 girls who were orphaned due to Corona have been admitted in Kasturba Gandhi Vidyalaya. Content of books for classes 1 to 10 has been effectively revised. These books are comparable to the best in the world. With correct alignment of thinking process, competitiveness and ambition can be aroused in the students. A good education system encourages curiosity and experimentation amongst the students. On the other hand we also have to work towards strengthening the local culture and the new National Education Policy works in that direction.