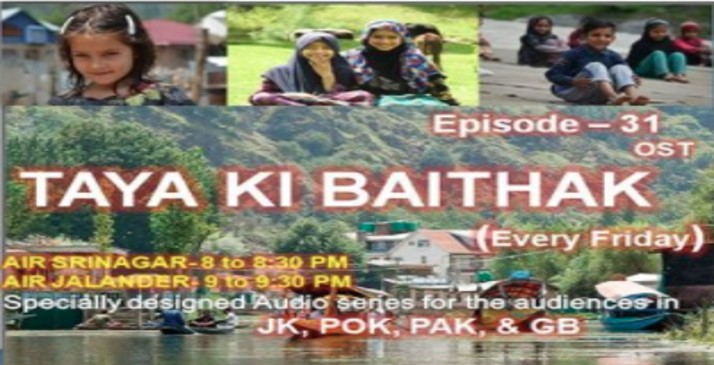 Episode 31 of the audios feature Taya ki Baithak highlights the blatant and open looting of the country by the Pakistan Army. The high level of corruption in the Army has also been brought out, including at the highest level. The high rate of inflation in the country and the subsidy being provided to Afghanistan, when their own people are facing hardships has also been highlighted. The fact the Pak leadership has to approach their friendly countries with a begging bowl for their basic necessities is also brought out, the loan from Saudi Arabia is specially referred to. The Pandora leaks exposing the level of corruption, especially within the Pak Army has got special mention, which has always been prevalent.

The episode also highlights the confrontation between Imran Khan and the Army. It further brings out that this rift between the Govt and opposition is also at a very high level leading to problems for Imran Khan.

The episode also highlights that the sit in PoK is very very bad and the people are calling for freedom from the occupation by Pak. People there are facing a lot of hardship even for their daily necessities. Pakistan has been carrying out loot in PoK ever since it occupied it forcefully. The Pakistan hierarchy has not left Baluchistan also where the situation is quite miserable. Prof Naila Qadir Baluch states that the Pak Govt and Pak Army are outrightly trying to annihilate the Baluch population. The CPEC, earlier tenured as an ‘Exploitation Corridor’, is non being termed as an ‘Execution Corridor’.

The episode brings out that for humanity to grow there is a requirement of peace and harmony in the environment. J&K has also faced a situation for the last 30 years where the scourge of terrorism has affected the youth. However, the Central Govt is now committed to clamp down on terrorism and upskill the youth of J&K, not only as a means for livelihood, but also as means of self-realisation.