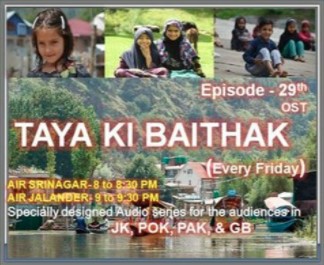 Episode 29 of audio-feature highlights the sad state of affairs and human rights violations and prosecution of the people of Baluchistan, Gilgit-Baltistan and PoK. Innocent people are being oppressed by the Pakistani Army, which is carrying out kidnapping, loot and forced disappearances. A statement of Sarah Baluch brings out that the Baluch people are facing grave prosecution by the Pak Govt and the Pak Army.

The strategic Gwadar Port has also been handed over to China for their use. Raw material and minerals are being taken out from Baluchistan and nothing is being given back in return. Javed Baluch further brings out that the innocent people have also been attacked with chemical weapons by the Pak Army. Eight Economic Zones are being established as part of the CPEC, however not even one of them is coming up in Gilgit-Baltistan or PoK. No investments are coming in these areas nor are the people being given any compensation.

The episode further highlights the direct involvement of the Pak Army with the Taliban in the Panjsher Valley in Afghanistan against the Northern Alliance and the Pak Air Force had sent Attack Helicopters to assist the Taliban. Moreover, the Pak ISI Chief Hameed Faiz also vis Kabul. The Pak PM has been supporting the establishment of the Taliban Govt and calling for its recognition. By supporting Afghanistan, Pak is looking towards Afghanistan to support its proxy war in Kashmir, against which India needs to be vigilant.

In a statement Brig Narinder Kumar (Retd) has said that the ISI and Pak Army have completely taken over Afghanistan and the Govt formed in Afghanistan includes only those people who support Pak. Their aim is to achieve strategic depth in the West and North, gain international recognition for the Taliban Govt to make it legitimate, and subsequently use the jihadi elements against Kashmir and India.

Activities in Pak, Afghanistan and along the loc will have to be monitored carefully and capabilities developed to counter any threat developing from the ISI-Taliban nexus. This nexus is not only a threat for South Asia, but also for Central and West Asia, in terms of security, stability and religious harmony. The production of huge quantity of drugs being produced in Afghanistan and the drug trade is a threat to the entire world, especially if supported by non state actors.

The episode finally highlights the assistance being provided by the Indian Army through Op Sadbhavana to enable the local awam in leading a better life and achieving their aspirations. Recently, 300 students of UT of J&K have been sponsored to pursue higher education in Mewar University.

In a statement Brigadier Brijesh Pandey brings out the scope of Op Sadbhavana which covers education, infrastructure development, medical care, basic requirements for the benefit of the people etc. He says that the initiative to send students to Mewar University is a great boon for the young people to live up to their capability and added that we plan to send about 300 students every year for such educational opportunities.