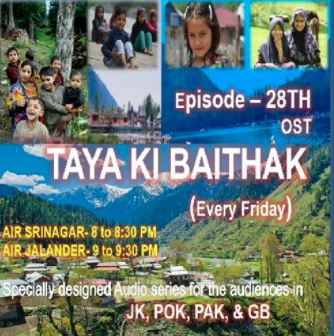 Episode 28 brings out the use of terrorism as a state policy by Pakistan to further their nefarious plans. Attrocities being carried out against the mainly Shia Hazara community has also been brought out. They have been facing deliberate prosecution for many years, even though they carry out only non-violent protests.

Democracy in Pakistan is redundant as it is mainly the army which is dictating terms to the puppet Govt. Innocent people including children are being killed as a result of their wapped policies. Pakistan has accepted that all their attempts to raise the issue of Kashmir and malign India, in the international arena have been unsuccessful. No country is supporting Pakistan against India on this issue. Pakistani ministers are being called corrupt and are being charged with taking bribes.

Smuggling of narcotics through Pakistan into India has also been covered in the episode, which is of grave concern for all of us. Smuggling of Afghan heroin worth crores in the international market is taking place. The link between narcotics smuggling and terrorism has been brought out by Lt Gen DS Hooda (Retd), who further adds that drugs are being smuggled into Kashmir which are affecting the society.

Firstly, drugs are being sold and the money is being used to sponsor terrorism. Secondly, the affect on the society is also devastating. The youth are specially vulnerable. Drug trade has provided 60% of the revenue to the Taliban. Large scale smuggling and use of drugs will have a telling effect on the security situation in Kashmir. We will have to secure our borders more efficiently as Pakistan is also using drones for air-dropping arms and ammunition as well as drugs into India. The civil society will have to play a big role in preventing a negative influence of drugs in the society and increase in crime. A ‘whole of the society’ apch will have to be followed to ensure safety in the society.

Pakistan appears to be following a path in which everything that is unlawful is given support. However, J&K has gone ahead of them in development and youth employment, including woman empowerment. Schemes provided by the Govt have made this possible.

Finally, the episode brings out the employment opportunities of Jam and Jelly business. These are made from fruits so they are healthy. It is easy to make and quite profitable with little investment. However, it is important to get training in some Govt or private institution. Publicity and marketing will also be an important aspect for furthering the business, as well as registering your company and surveying the market. Loans up to Rs five lacs are available for starting this business.