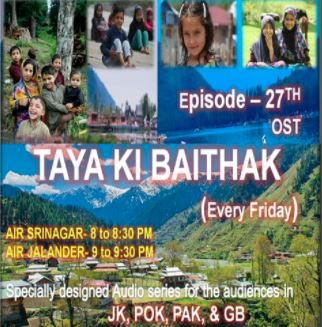 Episode 27 of the audio feature has highlighted that Pakistan is trying to acquire indirect control over Afghanistan by installing a puppet regime. Pakistan will cut a sorry figure for its interference in the internal affairs of Afghanistan as the Taliban are not bound or willing to obey Pak orders.

V K Sharma has opined that strategic implications of Pakistan’s involvement are becoming apparent now. Nationalist elements in Afghanistan will never accept being sidelined in favor of Haqqani network and there will be armed opposition to Pak’s efforts. Factionalism in Taliban would lead to further infighting and instability. Starvation is the biggest humanitarian crisis now facing Afghanistan along with mass exodus. Donors’ conference in Geneva has recently pledged $ 1.1 billion aid to Afghanistan, but USA has frozen all aid till international recognition is gained by the Taliban regime. However, money is likely to come from China through BRI. While 80% of the people of Afghanistan are in favour of democracy, the vast majority are anti Pakistan.

Anthony Blinken has accused Pak of playing a double game in Afghanistan and stated that they will recalibrate their relationship with Pakistan. Iran has decried the role of the Pakistan Army in Panjshir Valley and Pak’s interference in Afghanistan’s internal matters.

Asad Durrani in an interview has acknowledged India’s growing influence in the region. He has opined that two big advantages for India in Afghanistan are influence of Bollywood and lack of common borders.

Pak has also re-activated its terrorist launch pads. It should be aware that it is losing its grip on Gilgit-Baltistan and PoK and that the world is aware of Pak atrocities in PoK. Yashwant Shina, former Minister of State of Finance, has stated that Pakistan is suppressing the voice of the people in PoK.

During his recent visit to J&K, Sports Minister Anurag Thakur has acknowledged that remarkable change has taken place in J&K after thirty years. Rs 20 crores has been provided by the Modi Govt for construction of stadiums in J&K. Demand of the people under Jal Jeevan Yojana has also been approved. Sports Ministry has given Rs 34 crores separately and 40 khelo India Centres have been approved. Youth in J&K will now be better prepared to win medals for the state and the country in future.

In the end the episode brings out that flower business offers good job opportunities, but one must know the market. Cheap flowers are available from Maharashtra, Karnataka, Andhra Pradesh, Rajasthan and West Bengal. Wholesale market in Ghazipur in Delhi is also a reliable source. Highest demand for the flowers comes from USA, UK, Netherlands, Germany, UAE and Saudi Arabia. This business is another good opportunity for the people of J&K to start their own enterprise.