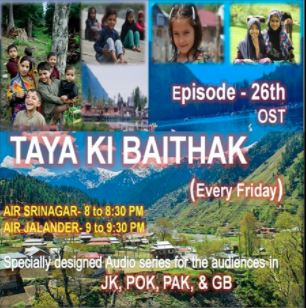 Taya ki baithak Episode 26 analyses the meddling in Afghanistan by Pakistan, especially after the take over by Taliban. Episode brings out that Pakistan has always been meddling in the internal affairs of Afghanistan with the aim of gaining strategic depth since after their defeat in the 1971 Indo-Pak War. They had started a low level Islamic insurgency in Afghanistan, which they tried to exploit.

However, the situation is very different this time as the Taliban has not been recognised by the international community.

Pakistan will also try to push maximum terrorists into India, but we are much better prepared now compared to our state in the 1990s. Our counter infiltration posture is also much improved. We have to now ensure that the youth of J&K do not go astray due to being misled by Pakistan and their devious propaganda, and they have all the opportunities to meet their aspirations. China is also exploiting the opportunity provided by the current situation in Afghanistan due to its own vulnerabilities against the QUAD and AUKUS.

Afghanistan provides China an access towards the Middle East as well as Europe. Pakistans geographical position is also advantageous to China. The Central and UT Govts are totally engaged with the people of J&K to ensure that they do not go back to the heightened state of militancy and mis-governance. The people will also not support it now.

India has time and again brought out in the UN General Assembly that the terrorism being faced by Pakistan is a result of its own policies and misdeeds. Sneha Dubey, India’s First Secy at the UN, further brought out that terrorism is a state policy of Pakistan.

PM Modi also reiterated the dangers of terrorism being used as a political tool as it is equally dangerous for their own country. He also pointed out that the land of Afghanistan should not be used to spread terrorism or be used to launch terrorist attacks.

Vivek Katju, former Secy MEA, has brought out the double standards of Pakistan, and that the USA and India are putting pressure on Pakistan to stop spreading and supporting terrorism. However, this does not seem to be happening and Pakistan is unlikely to change its policies. USA is also wary of putting too much pressure on Pakistan, as it might drive them closer to China.

Rana Banarjee, former Principal Secy Cabinet Sectt, says that Pakistan is playing a dual game which is not viewed favourably by the US Senate. However, US is still engaging with Pakistan economically.

The people of J&K want peace and development in the UT and are coming out openly in favour of it. They are aware how Pakistan has misled them in the last three decades leading to death and destruction in the UT.

Nitin Gadkari, Union Transport Minister of India, brought out that the Zoji La tunnel will provide a life line to the people of Ladakh and Kashmir. Tourism in the area is also likely to get a much needed boost.

The episode further brings out the advantages of bee-keeping as a form of employment for the people of J&K and how they can earn good profits from it. The Govt provides a lot of support for bee-keeping and providing employment to people through “Honey Mission” project. Discounts and loans are being provided to start projects on their own and get some employment. Approx Rs 4 crores worth of honey has been produced through this mission.