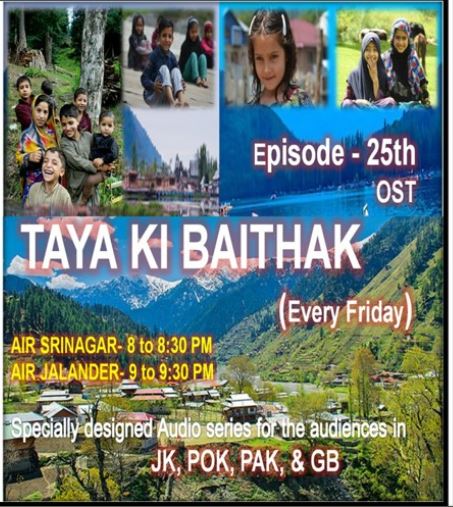 The episode 25th of TAYA KI BAITHAK deals with the continuous obstacles which Pakistan has created for itself because of purporting shady activities. They supported Mayahiddin’s Afghanistan earlier and now, they are trying to control the Taliban govt. Also, Pakistan wants to be food looks of US as well as China, which is not at all possible. Pakistan has to choose, which is again not materialising. Pakistan has left no stone unturned to malign the image of India by purporting false propaganda on Kashmir issue at the UN GA, where IFS officer Miss Sneha gave a befitting reply to Imran Khan’s false allegation.

The most of the issues raised by Pakistan generally, fall flat as their has been no backing of the facts whatsoever.   This episode of TAYA KI BAITHAK highlights basic human rights which are violated and the international forum it has host it’s credibility as a democratic country. Famous journalist Kamran Khan elucidates that the international image of Pakistan has suffered so much that cricket teams of Newsland and England have cancelled the tournament. The relations with China are also not in best shape.

The prominent world leaders like Joe Biden have also not had any interaction with the Pakistan PM which shows the lack of interest by USA in Pakistan and it’s evident the Pakistan no longer enjoys any popular support. These has been no conversation/ interaction of Imran Khan with Yi chin ping even since Feb this year shows that the bilateral this have taken a fall. We are trapped in the net of CPEC and are not gaining anything as nation. Even US blames that situation in Afghanistan is entirely the wrong doings of Pakistan.

The teams of Newsland & England have cancelled the tour keeping the security situation at the forefront. There is a need to understand and formulate a way ahead to talk to US an multiple issues, this should be understood by Gen Bajwa and Imran Khan. The 62 billion dollar CPEC project of China is a big debt trap for Pakistan. The project has resulted into China gaining ultimately, as many power projects keeping China in mind only, also, the 20% profit by each project being constructed is being minted by China. The treasury is almost empty and Pakistan is under a debt of 2.5 trillion dollar. The CPEC has become a thorn in threat of Pakistan only.

A famous Pakistan Scientrst Parrey Khan further elucidates that CPEC has given an open access to the Chinese totally finishing the sovereignty of Pakistan, as it is evident that China is bulldogging it’s way by doing whatever it desires on the name of CPEC. All scientists, engineers and technicians are all Chinese. The nuclear power points and power projects in the pipeline are not benefitting Pakistan, as it is costly and coal power projects are raising the temperature hence, causing pollution. There are a lot of atrocities being committed by Chinese in Sinkzang region of China, which clearly brings out that Chinese cannot be trusted on the issue at all. Pakistan can only stand on it’s feet with the power of education and ultimately Pakistan should not be dependent on any nation.

and incompetent, who do not understand the importance of Kashmir and related issues at all. There is a fake propaganda of “Azadi” woven by Pakistan in the Kashmir valley. Also, Baluchistan is the place where the common people are actually fighting for freedom. There are non-stop instances of being abducted and failed if they are raising voice. Children are being assaulted, brutally raped. The actual struggle of freedom for Baluchistan is being fought by the people and there has to be a govt. In exile, the headquarters of the same should be established at Delhi.

Representatives of GB and Kashmir should be sitting in ladakh, Jammu to start the paperwork for establishing “reconciliation and truth commission” because there lands are to ultimately form part of India. All the details of people abducted, murdered should be taken out to be brought out in front of the world. These represent actives should work for people of PoK and boost the supply of food, basic requirements, otherwise the Pakistan regime will kill the AWAM mercilessly.

The government of India is making continuous efforts to gel with the AWAM of J&K, for this reason the Minister of Finance and state is conducting continuous recce of the area near Srinagar. The minister stated that he is reaching out to the people to Kashmir to spread awareness of schemes for the poor and needy. These representatives are meeting all the needy and poor.

The last segment of the episode deals with the opportunity for the youth in the field of floriculture. An accomplished youth in the field Ms Priyanka Thakur elucidates about it. Making beautiful floral gardens, increase production of dry flowers and perfume making are the off shoots of the same. She classified the flowers in two parts loose flowers like (marigold) and out flowers like rose, there is skill set which needs to be mastered for the same. This field opens up an entirely untapped provost for the youth.