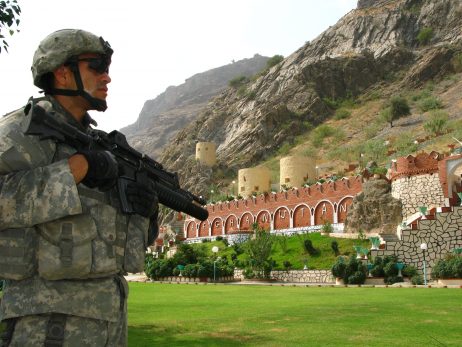 In a major development, the Afghan Taliban have warned their neighbors against allowing the United States military to operate bases on their soil.

“We urge neighboring countries not to allow anyone to do so,” the Taliban said in a statement.

“If such a step is taken again, it will be a great and historic mistake and disgrace,” the group said, adding that they would “not remain silent in the face of such heinous and provocative acts.”

The statement comes amid speculations that Pakistan may allow the United States to use its soil for counterterrorism operations after American troops complete their withdrawal from Afghanistan by September this year. Last week, the principal deputy assistant secretary of defense for Indo-Pacific affairs, David F Helvey, told the U.S. Senate Armed Services Committee that Pakistan has allowed the U.S. military to use its airspace to support its presence in Afghanistan in the past.

“Pakistan had always allowed overflights and ground access to the U.S. to facilitate its military presence in Afghanistan and would continue to do so,” reported Pakistan’s newspaper Dawn, citing its sources.

Earlier this week, Pakistan’s foreign minister, Shah Mahmood Qureshi, told the Senate that Pakistan would not offer its military bases to the U.S. for future counterterrorism operations in Afghanistan.

“No new agreement has been made in this regard.”

However, the records show that while officially Pakistan has rejected reports of offering military bases or allowing drone attacks in Pakistan, secretly such an understanding remained in place in one form or the other. For instance, in 2008, WikiLeaks revealed that Pakistan’s then government was not unhappy about U.S. drone strikes and quietly allowed U.S. Special Operations teams to operate on its soil.

In a cable filed in 2008, Anne Patterson, the U.S. ambassador to Pakistan at the time, narrated a meeting with then Interior Minister Rehman Malik and Prime Minister Yousaf Raza Gilani. Patterson wrote, “Malik suggested we hold off alleged Predator attacks until after the Bajaur operation. The PM brushed aside Rehman’s remarks and said, ‘I don’t care if they do it as long as they get the right people. We’ll protest in the National Assembly and then ignore it.’”

Another set of documents released by The Washington Post in 2013 says that “Pakistan’s government have for years secretly endorsed the [drone] program and routinely received classified briefings on strikes and casualty counts.”

These released documents indicate that Pakistan’s public or official stance on issues such as offering bases to American forces does not always reflect the country’s policy course.

Any government in Pakistan understands that publicly accepting or even endorsing such a plan could have serious implications. Such a proposal would be highly unpopular in Pakistan and may create trouble for whoever is in power. Thus, keeping such agreements under wraps and offering deniability if needed is perhaps best suited for all parties involved.

However, this time around, the Taliban’s threat has added a new ingredient to the mix. It essentially means that Taliban are not only unhappy about Pakistan’s previous policy to quietly host U.S. special ops but may now be willing to openly oppose it. Perhaps, from the Taliban’s perspective, the United States’ 2001 air and ground communications agreement with Pakistan aided the stay of American troops in Afghanistan. The statement from Taliban further shows that the organization’s autonomy, and ability to act independently of Pakistan’s influence, continues to grow, perhaps aided by the group’s recent diplomatic and military victories.

Pakistan’s policymakers may have effectively evaded public and media pressure in the past on the question of U.S. military bases and drone strikes. But the Taliban’s threats now mean the country has a lot to think about as the group wouldn’t shy away from naming and shaming Islamabad. If this happens, how it will impact Pakistan’s relationship with the Taliban is something that remains to be seen.

Will the U.S. force Pakistan into hosting its troops, as it did in 2001 when the former President George W. Bush famously conveyed: “You are either with us or against us”? The U.S. has many options if it wants to pressure Pakistan, but will it act as it did following the September 11, 2001 terrorist attacks? Perhaps we will know more in the coming weeks as the U.S. accelerates its outreach to Pakistan to work out withdrawal plans.