The Taliban seizes more major cities as they race to take full control of Afghan. 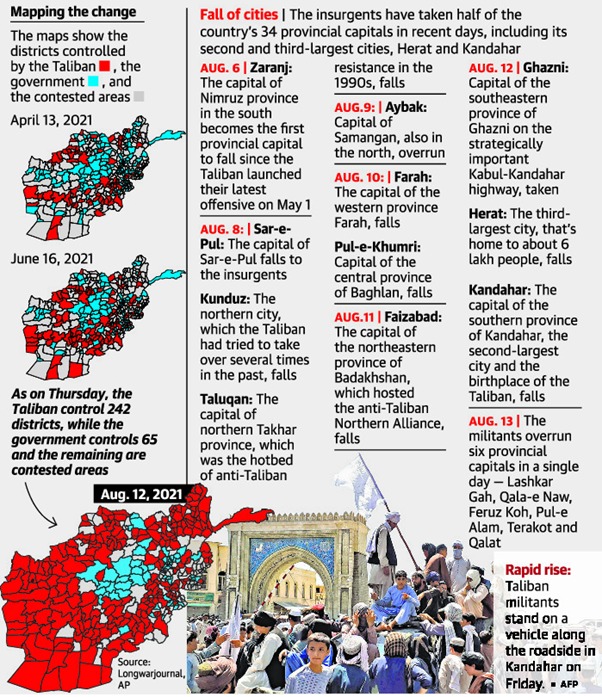 The Taliban’s advances have pushed foreign governments into swift action.
The U.S. and Britain have deployed thousands of troops to evacuate their citizens and pull out their embassy staff from the capital Kabul.
The Pentagon also said that 3,000 U.S. troops would be deployed to Kabul. However, it was made clear that they would not be used to launch attacks against the Taliban.
India also closed its consulate in Mazar-e-Sharif.
Developments so far:

The government had controlled all 34 provincial capitals and more than half of the country’s 421 districts before May 1, 2021 (when international troops started withdrawing).
At present, the Taliban controls two-thirds of Afghanistan with control over at least 17 provincial capitals.
Taliban has taken control of Kandahar (Afghanistan’s second-biggest city), Lashkar Gah, the capital of neighbouring Helmand province, capital of Logar province (50 km from Kabul) and is inching closer to Kabul.
With half of the provincial capitals under their control, the militants are surrounding Kabul from all sides.
Rise of TalibanImpact on Afghanistan’s Neighbours:

After capturing the districts, the Taliban turned their focus to the border crossings.
They seized the Sher Khan Bandar crossing with Tajikistan, the Islam Qila crossing with Iran and Spin Boldak with Pakistan.
By taking these crossings, the Taliban squeezed the Kabul government out of critical revenues.
The control over the northern border would allow the insurgents to check potential aid coming from neighbouring countries to their enemies in the future if a 1990s-type civil war happens to break out.
Is Kabul in danger?

The fall of Ghazni, Herat and Kandahar are the heaviest setbacks to the government so far in the war.
Ghazni is on the Kabul-Kandahar highway, roughly 150 km south of Kabul, linking the Taliban-controlled areas with the capital city.
Clearly, the Taliban are encircling Kabul from all sides.