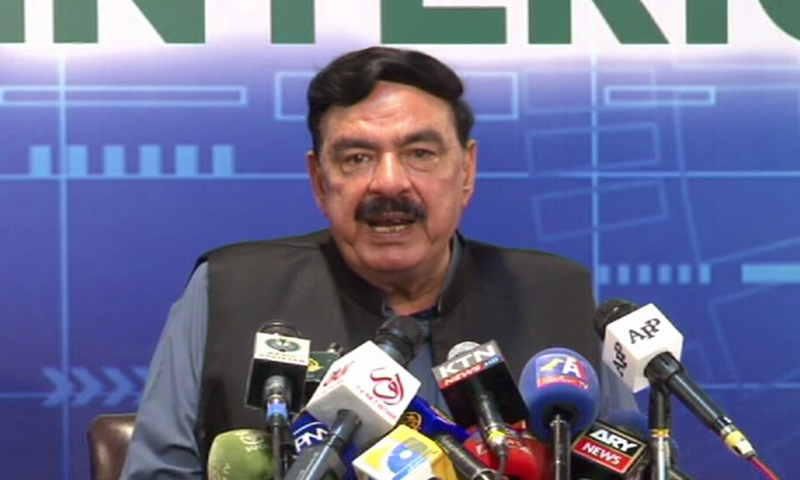 Interior Minister Sheikh Rashid said on Monday the Afghan Taliban had reassured the government that the banned Tehreek-i-Taliban Pakistan (TTP) would not be given permission to operate in Afghanistan against Pakistan.

Responding to a question while addressing a press conference in Islamabad, the interior minister said some TTP members such as Maulvi Faqir Mohammad had been released by the Taliban after their takeover of Kabul on August 15, adding that the government was in “full contact” with the Taliban on the issue.

“The related authorities there have been told that those who have done terrorism in Pakistan are controlled.

“The Afghan Taliban have reassured us that Afghanistan’s land will not be allowed to be used in any case by the TTP, said Rashid.

He said Pakistan desired peace in Afghanistan since peace in one country was related to peace in the other.

The interior minister’s comments come two days after the Foreign Office said Pakistan would ask the incoming government in Afghanistan to act against the TTP.

“Pakistan has been taking up the issue of the use of Afghan soil by the TTP for terrorist activities inside Pakistan with the previous Afghan government and would continue raising the issue with the incoming government in Kabul as well to ensure that the TTP is not provided any space in Afghanistan to operate against Pakistan,” the FO spokesman had said.

The FO was questioned on the release of TTP prisoners and responded that Pakistan would “continue to oppose support for any individual or any proscribed groups that remained involved in terrorist activities inside Pakistan”.

According to a report prepared for the United Nations Security Council in July, the TTP has about 6,000 trained fighters on the Afghan side of the border.

The report had noted that “despite growing distrust, TTP and the Taliban carry on with relations mainly as before”, adding that the former supported the latter in operations against the Afghan government.

Regarding Pakistan’s efforts to facilitate evacuations from Afghanistan, Rashid said more than 1,200 people including Americans had been evacuated and more than 4,000 visas had been issued in total.

He said the interior ministry was also ramping up its capacity in case more visas need to be issued.

The interior minister clarified that Pakistan had no connection with the situation at Kabul’s airport.

“People are expecting us to gather people from different areas and give them entry to Kabul airport but this is not our responsibility,” Rashid said.

In regards to refugees, he said no decision had been made but people coming at the border were being facilitated.

Rashid further said that Pakistan had “no reservation” on requests by the European Union and other countries to park their planes in Pakistan for transport and other matters.

Regarding the fallout from the Afghan situation, he said the China-Pakistan Economic Corridor’s (CPEC) importance had increased.

Terming CPEC the “jugular vein” of Pakistan’s economy, he claimed there were “international conspiracies” underway against the project but the government was committed to taking it further.

He said 40 companies operating under CPEC were being provided protection by the army but recent events such as the Dasu attack and Quetta’s Serena Hotel blast signaled that “people want to play with the lives of Chinese who are not only friends but well wishers of Pakistan.”

Rashid said he had assured Chinese Ambassador Nong Rong of complete security to Chinese workers, adding that all of Pakistan’s institutions were working on it.

Regarding investigations of incidents against Chinese personnel, he said some suspects had been arrested while others were being traced.

“We have reached the source of the Fisher Colony incident as well, he said, referring to Friday’s suicide attack targeting a vehicle carrying Chinese nationals in Balochistan’s Gwadar district