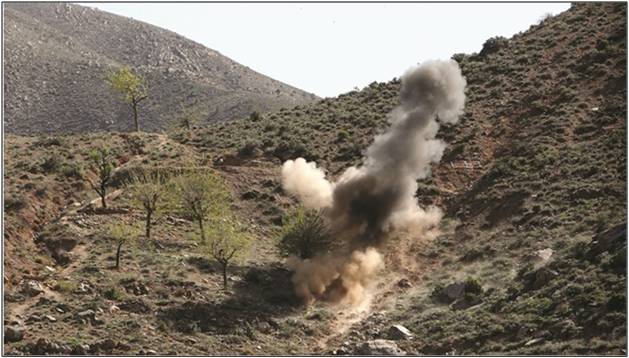 Taliban-appointed Defence Minister during his visit to the Durand Line in Paktia province said that the country will not allow any other country to act aggressively against Afghan soil.

The refusal to accept the status of the border between Pakistan and Afghanistan (Durand Line) by the Taliban regime has clearly shown the cracks in the relationship between the two countries.

According to Afghanistan’s Acting media outlet citing the Mansoori Corps statement, Minister Mawalwi Yaqoob Mujahid said that Afghanistan never acts aggressively toward other countries and will never let any country do so against Afghan soil.

Mujahid told the forces that the Islamic Emirate wants good relations with neighbouring countries and expects the same from them.

Pakistan has committed a strategic blunder in thinking that the Taliban, which the country helped in fighting a US-backed Afghanistan for over two decades, will fulfil Islamabad’s wishes.

Apparently, after Pakistan backed the Taliban for over two decades to gain Afghanistan’s control back, it seemed like a legitimate expectation of Islamabad that the Taliban will show some gratitude and accede to Pakistan’s wish list on a range of issues.

However, the Taliban have till now shown no signs of acceding to the wishes, rather, on several occasions, rejected Pakistan’s demands including the one to recognize the Durand Line.

Issues between Pakistan and Afghanistan have been controversial over Durand Line that divides not just the two countries but also the Pashtuns. The fact the Taliban is both Islamist and predominantly Pashtun implies double jeopardy for Pakistan in so far as the Durand Line is concerned.

As Islamists, the Taliban do not accept boundaries that divide the Muslims; as Pashtuns they see the Durand Line dividing the traditional Pashtun homeland.

Adding to the problem for Pakistan is the TTP factor. The TTP comprises of fighters from Khyber Pakhtunkhwa and the erstwhile Tribal Areas (now amalgamated as ‘Tribal districts’). They are being protected by the Taliban in Afghanistan.

Their links with the Taliban go back decades and they are, in the words of top Pakistan Army generals, “two sides of the same coin”. Because the Taliban do not recognize Durand Line, they will be loath to take any action against TTP on the behest of Pakistan.

In fact, they have told Pakistan that it needs to settle with TTP and accommodate their aspirations. The problem for Pakistan is that if it fights TTP, it will mean the Durand Line will be observed more in its breach; if however, Pakistan accommodates TTP, it will mean creating a proto-Emirate inside Pakistan which is closely connected to the real Emirate in Afghanistan, which in turn means the Durand Line ceasing to exist because neither Taliban nor TTP will respect it.

Even as Pakistan defied the international consensus on sanctions, to support the Taliban terrorism in Afghanistan for 20 years, there is even lesser trust, that Taliban have for Pakistan.

The mistreatment of senior Taliban leaders – blackmailing them, keeping their families hostage, incarcerating leaders and killing them in custody, handing them over to the US for incarceration in Guantanamo Bay, forcing them to launch operations – has not been forgotten, as per the media portal.