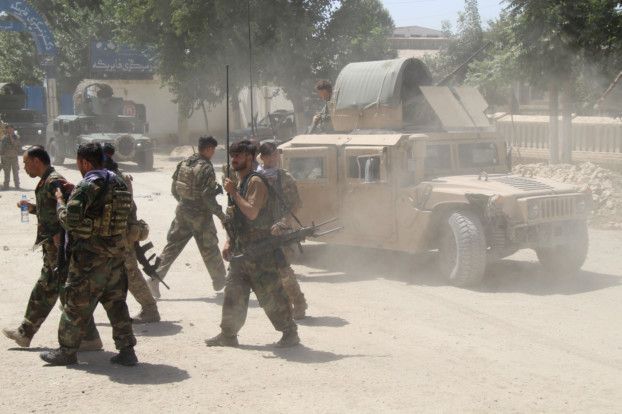 Kabul: Civilians in Afghanistan have taken up arms to push back against the Taliban as the militants fight for control of a crucial northern city and make deeper territorial inroads with the US set to withdraw all troops by September.

The insurgents are battling to take control of strategic cities in the country’s north, including its regional hub Mazar-e-Sharif, after capturing dozens of districts over the last two months. Local warlords and civilians have joined Afghan troops to push back the advance.

“Thousands of Afghan forces and armed civilians are prepared to defend the city of Mazar-e-Sharif, its outskirts and the districts that have been lost,” according to Mohammad Farhad Azimi, the governor of Balkh province, whose provincial capital is Mazar-e-Sharif. Afghan soldiers recaptured two districts in Balkh and the nearby Baghlan province during a fierce overnight battle that left 80 Taliban fighters dead, the country’s defence ministry said on Tuesday in a Whatsapp message.

The spiralling violence underscores the Taliban’s intentions to grab power by force as the US exits its two-decade-old war in the country. The push to control more territory comes even as the militants are negotiating with the government of President Ashraf Ghani to ostensibly reach a power-sharing agreement.

While the Taliban has been strengthened by the imminent US pullout, Afghan forces will continue to fight to defend the country, Abdullah said last week, adding that peace talks and a cease-fire are the only resolutions to the fighting.

Washington’s push for a peaceful settlement between the warring groups has so far been futile. There’s been no breakthrough since talks between Ghani’s officials and the Taliban began in September last year in Doha, Qatar, where the militant group has a political office.

A power-sharing deal is “very unlikely” and the Taliban’s recent territorial gains all point to a “forceful takeover,” said Madiha Afzal, an analyst with Washington-based Brookings Institution. Earlier, the United Nations warned the group remains aligned with Al Qaida and is massing fighters to overthrow the government.

Violence has flared up across Afghanistan since the news of the US’ departure. There’s been a surge in unclaimed targeted killings of journalists, politicians and civil society leaders.

As the militants press on deeper into the north there have been instances of Afghan soldiers either surrendering or withdrawing from the areas under siege, according to Sayed Zahir Masroor, a member of parliament from Balkh province. “The good thing is the people who have seen and experienced the Taliban’s brutalities are ready to fight them.”

Dozens of armed civilians have joined the army in battles heating up elsewhere in the country’s north, including the cities of Taloqan and Pul-e-Khumri, both near Mazar-e-Sharif, Masroor said.

While celebrating the recent gains, Taliban leader, Haibatullah Akhundzada, in a statement late Monday called on its soldiers not to harm civilians.

“We have joined the army to fight the Taliban stooges,” Zulfiqar Nazari, a warlord commanding almost a hundred local civilian fighters in Mazar-e-Sharif said in a telephone interview. “We’ll fight until our death to defend our cities and other areas.”