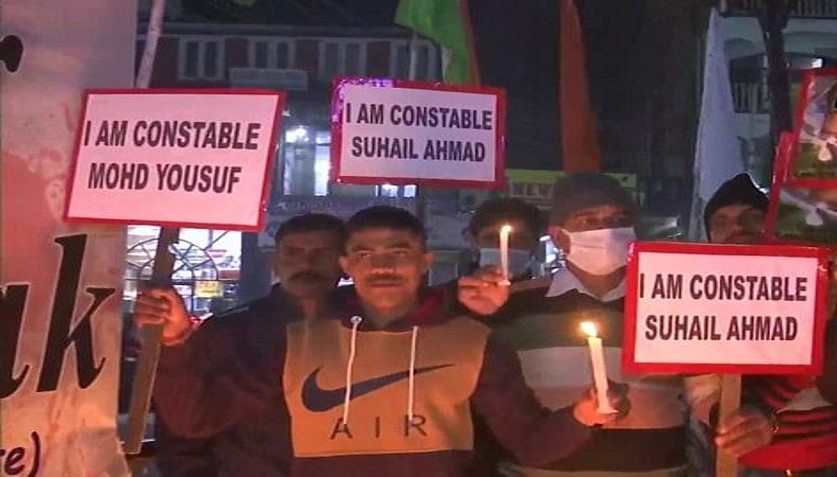 Militants have long been responsible for lists of bombings, shootings, and murders of civilians, tourists, and military personnel – the innocent victims added to the log of the collateral damage of the Kashmir Conflict, their files collecting dust in the lethargic government offices.

But for the first time in three decades after the unfortunate death of two civilians due to a grenade attack in Srinagar, one of whom was a brilliant student looking at a bright future, Kashmiris have raised their voice against the crusaders of war on humanity and have sworn to take vengeance against the ones who have bloodied the soil and corrupted the young minds of Kashmir.

19-year old student, Rafiya Nazir, succumbed to her injuries during her treatment at the SMHS hospital and a 70-year old man died on spot in the crowded market area of Amira Kadal. The grenade also left 33 people, including a policeman injured. Only a month back Rafiya’s family celebrated her Class 12 examination result, a grand 94 per cent. Her father, a carpet weaver, had drawn a loan of 1.5 lakhs for her medical examination coaching. She wanted to be a doctor, he said, she was the light of hope for us, for our family’s deteriorating financial and health conditions. At her funeral in Hazratbal, hundreds gathered, mourned, and wailed.

Srinagar witnessed its first candlelight protest against perpetrators of such violence who have debilitated the peaceful atmosphere of the land of Sufi Saints and kept it under siege of darkness. The streets of Lal Chowk swarmed with citizens of the state who staged a sit-in protest at the Clock Tower in unanimity against the terror attack. They raised slogans holding placards reading “Akhar Kab Tak?” (For How Long We Must Suffer?) The echo of “Save Youth, Save Kashmir” reverberated in the capital that evening.

Some carried the Tricolour high in the air displaying faith in the government. The demonstrators condemned the deaths of the innocents in great emotion and said that they wish for exemplary punishment for the offenders. Some lifted an admonitory finger on the live telecast and spoke of vengeance against the culprits.

It is not surprising that no terrorist outfit claimed responsibility for the attack as in the past when they would miss their target, they blamed it on the security agencies. This was the second grenade attack in Srinagar this year, after January 25th when four people were injured in Lal Chowk.

A protestor questioned, “Where are the Human Rights activists today? Where is Amnesty International?” Another came forward saying, “When international media highlights the killing of civilians by security forces in Kashmir, why stay mum when terrorists kill civilians? Or should we infer that it is acceptable for them when civilians are targeted?” A thought-provoking question was asked by one protestor, “Why isn’t there any statement from Amnesty International and other rights groups on this incident? Why isn’t there any human rights-themed story with a Srinagar dateline?”

Later on March 10th, a Pakistani terrorist of Lakshar-e-Toiba (LeT) was killed in a shootout when he tried to attack the much revered Hazratbal Darga Sharif in Srinagar along with two Kashmiri operatives of the outfit. They fired at the police guards positioned at the shrine and tried to snatch their duty weapons. The policeman shot dead the gunman Manzoor Haider Hamzah. This incident proved to the Kashmiris that their neighbours only wish for constant turmoil and unrest in the region. And the militants will not spare a chance, even if it means aiming at the holiest shrine of Kashmir just as they did in 1993 and 1996.

Kashmiri leaders have finally acknowledged the abuses and violations by the militant groups that they lovingly used to call “freedom fighters”. An ordinary Kashmiri regrets placing their faith in these people who promised to “liberate” but ended up training their guns on the same Kashmiris. In J&K there was a greater political sympathy for the militants’ cause than their violations on civilians and security personnel. The candlelight march and a consentient voice against terrorism after the grenade attack shows that Kashmiris are no longer scared; they will not allow Kashmir to be an entertainment ground of forces across the border.

Kashmiris have been subjected to immense suffering due to militancy in the past three decades. There is not a single family that hasn’t lost a relative, or a dear friend to the turbulences fuelled by Pakistan. They have endured to the extent that there are no tears left to cry. When one has nothing more to lose, fear evaporates. This incident has sparked a new passion for revolution in Kashmiris which will last until each raider is slain.