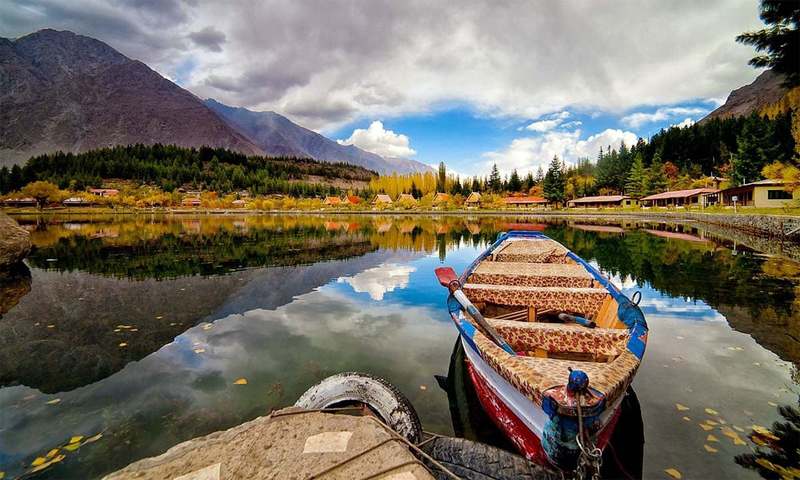 I would start by being grateful to have a friend and a host family who have been extremely generous and kind during our stay at Skardu for the past five days. My trip to Skardu was unplanned and sudden to say the least, considering I love to plan things and drop out at the end. But for a trip least planned, it was one of the most memorable ones and I will cherish its memory forever.

Skardu is a large area in the administrative district of Gilgit-Baltistan. Geographically, the Skardu valley is at the confluence of the Indus and Shigar rivers. The town is located on the Indus river, which separates the mighty Karakoram Range from the Himalayas.

Skardu has an astonishingly rich culture in comparison to the rest of the region. From the traditional cuisine to the use of language, the area has a distinct culture that sets it apart from the rest of the province. Apart from being geographically serene and administratively important, the region has political significance because it is host to Pakistan’s military airbase. This airbase is only 100 kilometers away from the Indian military base in Leh, which makes the region volatile in times of political turbulence between the two countries. This has been the cause of the rapid deployment of military personnel in the region which has reduced tourism in the region in its size and significance. The locals and the military do not share a mutual goal for Skardu’s future and this is the main bone of contention between the two sides.

Like most conflicts with the military, the locals have been deprived of the opportunity to have rights of self-determination and political freedom. The establishment can rightfully use the security of the region as an excuse to suppress conflict rather than resolving it, but it does not help the region in developing politically, economically, and socially. It is not for the first time that Pakistanis are facing this tug of war between locals and the establishment, FATA bordering the province of KPK and a conflict-ridden Afghanistan had to face a long drawn battle before they could achieve administrative and political success when they were merged with the province of KPK. Several areas in Baluchistan have faced a similar crisis. Does that imply that the people in Skardu would give up in the gloom and doom of this conflict? Absolutely Not!

The answer to this conflict is present in the landscape of the region which has over pouring potential to become one of the most important tourist spots in the region. Skardu’s tourism defines the overall goal of the region for the next era and it is a challenge that requires much more than strengthening the government’s tourism department. Skardu has to develop tourism at an ideological level with a magnitude higher than that of the establishments. The region has been the target of the military’s unrestricted control for the reason that it has proximity to the Indian border with which the country always has strained relations.

In response to this and for the future of its development, Skardu should develop tourism not just as a duty of the government but as an ideology of the local people. This ideological mindset for tourism requires an open mindset that can be developed by keeping orthodox religious, sectarian, and conservative sentiments aside and retaining norms and cultural behaviors that progress the cause of tourism in the region. Hunza, another district in Gilgit-Baltistan has been performing well on this front. However, development is still required to create a holistic tourism-driven ideology among the local Pakistani’s.

My perception of the hospitable nature of the locals is derived from an experience not significant to anybody besides my own party, but overwhelming experiences and instances of local and foreign travelers show that the locals of Skardu are off to a good start for developing a tourism-driven ideology. A hospitable attitude is the first ingredient for this ideology and the locals have plenty of it.

There is a vast amount of literature available which tells tales about the hospitable nature of the people in this region. Their hospitality has impressed many foreign and local tourists including myself. The k2 mountaineer Greg Mortenson who made a stop at Skardu during his trekking trip ended up making schools for the local populace. Education is another ingredient in the ideological mix required for Skardu’s tourism to thrive. Education breeds creativity and harnesses a positive as well as a receptive mindset towards foreigners visiting the region. Respect for foreign culture increases the number of tourists in an area because more and more people feel they would have a relaxed and easy tour with hosts who are understanding towards foreign culture.

This suggests that people should adopt a pluralistic and inclusive approach to foreigners of different cultures and backgrounds while developing their tourist ideology. Skardu is off to a better start on this front because Gilgit-Baltistan has the highest literacy levels in the country. With that milestone already achieved, the local population should set their eyes on the next milestone which is having a pro-tourism education system. This is not an abstract goal, especially for local schools. Education on tourism should be a part of the curriculum making it easy for the local government to convince the masses on the ideology and work towards its progress.

The biggest impeding factor in the way of a healthy tourism-driven mindset is sectarianism. Skardu is a Muslim Shia-sect dominated region while the majority in Pakistan is Sunni. The clashes between local Shia’s and Sunnis creates a crisis situation for anyone traveling to these areas. Sectarian differences should not be a source of distress for tourists as nothing puts off tourism more than violence or armed conflict. Therefore, to build a strong foundation of tourism sectarianism should face a complete end in the region as a necessity for progressing this ideology.

In a nutshell, the power balance between the locals and the military’s presence in the region has been creating feelings of contention between the state and the locals, but the solution to this tug of war for the people of Skardu is present in their ability to embrace tourism on an ideological level. With a hospitable culture and a higher literacy level than most of the country’s population, the region is off to a good start for progress in that direction.