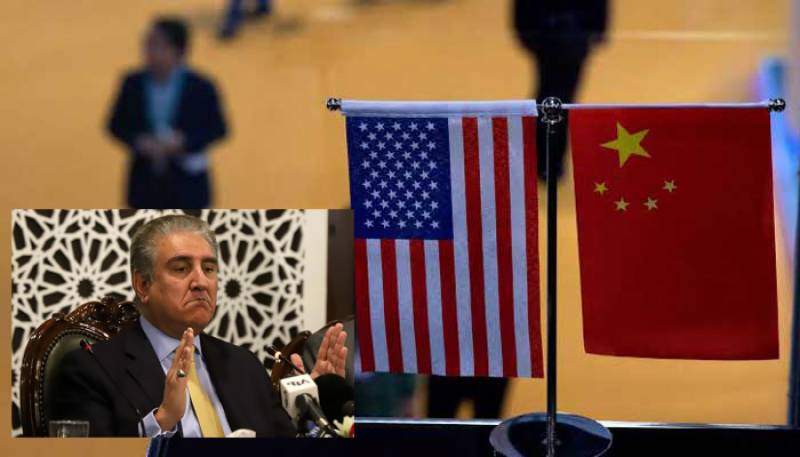 ISLAMABAD – The United States has been conveying a message to Pakistan to cut its ties with all-weather China through various means, Foreign Minister Shah Mehmood Qureshi revealed Friday.

Qureshi while speaking with a private news channel said the United States along with western powers hinted Pakistan to cut ties with China despite being aware of the country’s interests.

The minister clarified that “This is not a zero-sum game and if we are a friend of East Asian country, it doesn’t mean we are not friends with the US or with any western country.’ Adding that, ‘China never asked Pakistan to break ties with the US or any other country.”

Qureshi while responding to a query said: “No one says this directly there are ways to communicate such things through double meaning phrases. A China containment policy is underway at the global level. China is a rising power right now and possibly can overtake the US in the next few years. So there are fears in the West.”

Talking about the China-Pakistan Economic Corridor CPEC, he said: “CPEC is our need, it is our economic corridor for energy and trade and it has to reach its logical end, whether anyone likes it or not.”

The key project will move ahead at all costs and no pressure will overwhelm Pakistan. There are hurdles being created and that is why we have made arrangements for the security to ensure the safety of the project. There are elements that can damage it. Indian and other forces are scared of its success’, he further added.

Earlier on Thursday, Prime Minister Imran Khan reiterated that Pakistan will not change relations with time-tested friend China under any pressure as China stood by us in every difficult time.

Speaking with Chinese media on the occasion of the centenary celebrations of the Communist Party of China (CPC), the premier said Pakistan wants to further strengthen economic, trade, and political ties with the iron friend. He also mentioned that the US-China conflict creates complications in the region.