Security Forces attacked by Terrorists Groups in Areas of Balochistan 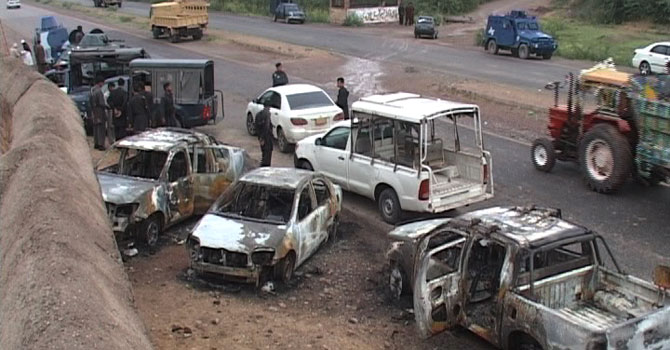 The report that seven personnel were martyred in an attack on a Frontier Constabulary check post in the Harnai area of Balochistan by unknown persons is proof of the reorganization of terrorist groups. According to details released by ISPR, the attackers were armed with light and heavy weapons. Attacks on security personnel witnessed a surge for the past few days. It seems, that the groups that want instability and anarchy in the country are reorganizing themselves.

After 9/11, Pakistan banned all non-state militant groups operating in its soil. The Taliban and their affiliates had strongholds in the tribal areas bordering Afghanistan. Chechen, Arab, Uzbek, and Turkmen fighters mingled with the local population in these areas. Pakistan’s strategy was very clear. All foreign militants were asked to surrender and register. The action was taken against those who resisted. The second part of the policy was to build fences and checkpoints on the Pak-Afghan border to prevent the movement of militants. This work is almost complete. Efforts have been made to increase the number of Pak-Afghan transit points to make the checking process more effective, but there are still many unguarded areas through which terrorists can sneak into Pakistan and carry out destructive activities.

Why Terrorist Incidents are Taking Place in Pakistan? Why Security Forces are Targeted

A report by Disinfolab a few weeks ago has made it easier to access the facts. The report said that more than 250 organizations and media outlets, both large and small, were affiliated with the Shrivastav Group of India to launch an organized campaign against Pakistan. The network involves individuals and groups who have an anti-Pakistan stance and want to fuel regional and ethnic prejudice in Pakistan. Many simple and sincere people are falling into the hands of these elements thinking that they are fighting for human rights, democratic values, and freedom of expression.

This network has been targeting organizations active in the tribal areas and some areas of Balochistan. It is noteworthy that for the last several months, not a day goes by when a young man of the Pakistan Army or a security official does not sacrifice his life while fighting the enemies. Every day, young men and civilians of the Pakistan Army are being martyred by the Indian security forces on the LoC.

Anti-Pakistan elements have established their bases on the Afghan soil. These people enter Balochistan and carry out subversive activities and flee to Afghanistan. Relations between Pakistan and Afghanistan are affected by these terrorist groups and their acts. These elements create an atmosphere of tension between the two states. One of the purposes of such acts of sabotage is to prevent the two neighbouring countries from getting closer to each other. Recent acts of terrorism in the troubled areas of the tribal districts of Balochistan and KPK have intensified following Pakistan’s submission of the dossier containing evidence of India-sponsored terrorism to the UN. This memorandum shows that India, which is busy levelling allegations against Pakistan, is itself a sponsor of terrorism. Those who play into Indian hands hold Pakistani security forces responsible for killing a woman associate of BLA in Canada a few days ago.

On 20 December, terrorists attacked Pak Army personnel in Awaran, killing a Lance Naik and injuring some of his comrades. After the incident, security agencies launched a search operation in the troubled areas. The recent incident is linked to this search operation. Terrorists and hostile countries have targeted Pakistan’s economic and security interests. The important thing in this regard is that the security agencies should review their intelligence system to enquire that if the intelligence agencies are not getting the required help they need to know the movements of terrorists.