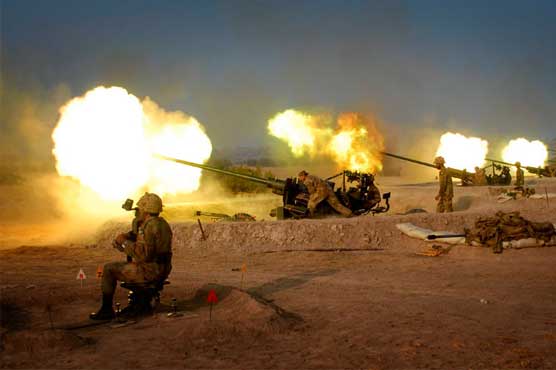 Our history is glamorous and magnificent. It enjoys a high-ranking international status amongst contemporary institutions located elsewhere basically owing to its modern outlook to social military life and combat training activities. Early in the 20th century, the gradual Indianisation of the Indian Army began to take place. This Indianisation also affected the number of the local inhabitants in the mountain regiments of the Royal Artillery. At this time the need to form a School of Artillery, on the lines of the School of Artillery at Lark Hill, was felt. In 1921, Kakul was selected for this purpose and the school started functioning there. In the middle thirties, however, it became clear that in view of the much-increased range of the new guns, which were then coming into service, the Kakul ranges were too small and too mountainous.

They were suitable for the mountain guns only. It was, therefore, shifted to Deolali, where it remained until partition. Then as was the case with all other central establishments, it was divided between the two dominions. A conference was held on 15 September 1947 at Deolali and a plan was made for the division of the School resources and for the move of the Pakistan share to Nowshera, which had for many years been a gunner station and possessed sizeable artillery ranges. Consequently, known as Royal Pakistan Artillery School, the institution was established at Nowshera. The school had meagre resources and the uphill task of training the manpower for the Pakistan Army. The first commandant of school was Lt Col L Gallarher.

The school was visited by Quaid-i-Azam on 13 April 1948, who praised the school for its dedication to training and teaching gunnery. The Commander-in-Chief, General Muhammad Ayub Khan followed the Quaid’s visit in 1951. Between 1952 to 1956, the school was reorganized by adding technical, tactical, locating wings, and publication section. The gunnery branch, equipment, ammunition, and trial branch were added to the gunnery branch. The designation of the Royal Pakistan Artillery School was changed to the School of Artillery. However, in January 1957 the School was again reorganized to meet the growing requirements of the Pakistan Army. In 1958, Lieutenant Colonel Ameer Ahmad took over as the first Pakistani Commandant. Since then, the school has come a long way in developing its Infrastructure, Training Philosophy, and Doctrine.

It is located along the western bank of River Kabul at Nowshera. The historical city of Nowshera is a natural base for any inquisitive traveler to explore the beauty of North-Western parts of Pakistan, which offers an assortment of breathtaking scenes ranging from Khyber Pass to the snow peaked mountains of Great Himalayas. The city is positioned at a distance of 120 kilometers from Islamabad International Air Port and 48 kilometers from Peshawar International Air Port. Climate of Nowshera is temperate. It is hot and humid in summer, temperature rises above 40°C. Winters are cold and temperature varies from 5°C to -1°C. However, spring and autumn are pleasant. Rains in monsoon season are mild and weather remains overcast.

The contours of training philosophy are built on following bases:

Infantry Division is the level of our training effort. Taking this as a basis, variations are taught relative to the level and scope of the course.

Within the ambit of aim and scope of the course, effort is to train officers, Junior Commissioned and Non-Commissioned Officers for higher responsibility. Training curriculum is progressive commensurate with rank, service and level of participation by the students in professional pursuits.

War-experienced instructors and battle proven training regiments back the training effort. We have a mix of eastern and western equipment and, therefore, enjoy a unique position amongst the contemporary institutions. This feature has added an international distinction and a facet of universality in training, where gunners from the entire globe can be trained together. The availability of firing ranges within school premises help impart a realistic training to students. This being a value-added feature is envied by many of the existing training institutions of the world.

The academic subjects taught at PMA are designed to produce a young potential leader with a sound education in appropriate academic subjects, with interest in the current world problems, and enthusiasm to continue to increase his knowledge through his own initiative.

There are two courses of Academic Studies which are Science Course (B.Sc) and Arts Course (BA). English, Military Geography, National & International Affairs, Mutalya-e-Quran, Military & General Science, or Social Science are common subjects, while one of the following range of combinations is mandatory.

School is well equipped with facilities, few among them are:

The school is co-located with other training institutions like the School of Armour and Mechanised Warfare, Military College of Engineering, School of Army Service Corps, and Pakistan Air Force Academy. This disposition enables us to impart integrated training in virtual battlefield environments. The school is organized mainly into Administrative and Support Wing and a Training Wing. School environment has been developed into a campus. Campus life ensures availability of most of the facilities to all of the students for most of the time. Like mess is a facility not only for regular meals but also for tea break, for retiring, library and gymnasium with an outlay of playground around it. Similarly, Gun Park has been developed for instructional classes, practical study and likewise other activities. Computer section is a facility not only meant for core academic pursuits but for information/research by installing Internet and for studies by establishing video library.

For this purpose and to accommodate an increasing number of interested students, high tech computers have been added, and various lectures have been video filmed for maximum education value. Further, the campus has been extended to the Range Area, which helps to create an environment, whereby the Range Area has become an extension of the classroom and is no more taken as fatigue or a ritual. Extended facilities like dry-cleaning, telecommunication, mess detachment for late hours tea, etc. reach out to students. The reception center is also an effort toward this end. To give students an idea of deployment employment of Artillery in Mountain, the School maintains a wing at Kalam Valley, where necessary infrastructure for Snow and Mountain Warfare Section is in the offing.

The campus ensures the availability of maximum facilities to all students for most of the time. Mess is a facility where not only oriental and continental dishes are served but also a library, gymnasium and an outlay of playground around, it provides easy access to students and helps them in developing their physical and intellectual faculties. Since its inception, the institution has produced a large number of eminent personalities, who have risen to command the Corps and Pakistan Army. General Tikka Khan, General Sawar Khan and General Pervez Musharraf are amongst the well known personalities of Pakistan Army. On the other side graduates of this institution have also displayed supreme valour and courage. Several sacrificed their lives, for nation’s better tomorrow. History has recorded them as War Heroes and State bestowed upon them gallantry awards.

The School of Artillery has its own honours and distinctions. These are not mere symbols; they are true reflections of this institution’s glorious past, eminent present, and bright future. These are not mere adoptions; they have been conferred upon as a reward for imparting professional and training skills not only to Pakistan Army Cadre but also to the students belonging to armies of friendly countries.