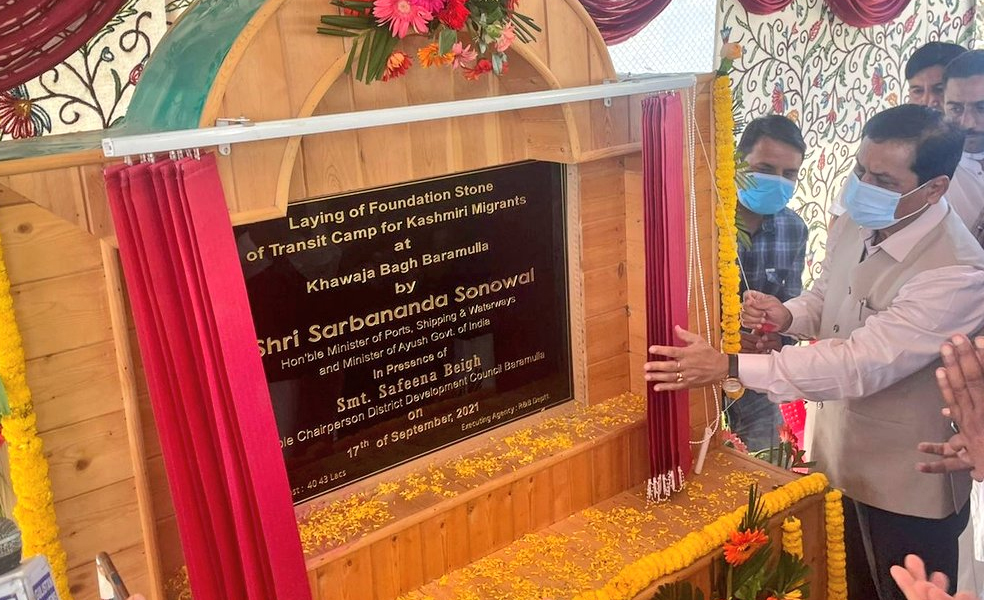 He said that several concrete measures have been taken in order to ensure their rehabilitation so that they live in their homeland with peace and harmony.

The Union Minister made these remarks after laying the foundation stone of Transit Accommodation Camp at Khawjabagh Baramulla.

The Transit camp, having the accommodation facility for about 337 families, shall be constructed at an estimated cost of Rs 4032 lakh with a cost of Rs 12 lakh on each flat.
About 50 kanals of land has been acquired for the purpose.

While terming the people of Kashmir having loving and accommodative nature, the Minister said that time has come when the people of different faiths and beliefs live with peace and prosperity.

He said that unity in diversity, as envisaged in ‘Azadi ka Amrut Mohatsav” initiative, is the only unifying factor for a strong nation.

Pertinent to mention that the Union Minister, accompanied by top functionaries was on two day’s visit to Baramulla district as part of Union Government’s special public outreach programme which aims to evoke feedbacks of different stakeholders besides listening to their developmental aspirations and other concerns.

On the second leg of his visit, Shri Sonowal met scores of delegations and deputations who apprised him about their demands and grievances.

Representatives of different political parties called on the Minister wherein they highlighted several demands and grievances pertaining to socio-economic development of the society.

Those include up gradation of basic infrastructure in AYUSH institutions, development of waterways wherever possible, amongst others.

A delegation of PRIs extended gratitude of the central government for conducting the outreach programme so as to hear the common masses.

Shri Sarbananda Sonowal gave a patient hearing and expressed happiness over the meeting held with the delegations.

He said that Union Government has a good dream for development of Jammu and Kashmir, adding that the present out-reach programme has been initiated by the Government to know the basic problems of the people at the ground.

He assured that the demands and grievances projected by the delegations have been taken note of and the same would be put up with Government at Union level as well as with Lieutenant Governor for their timely redressal.

Impressed with the positive and cooperative attitude of different cross section of the people, the Union Minister said that everyone has to play its part for boosting the development tempo.

He congratulated the PRIs for successful establishment of three tier Panchayati Raj System and said that three tier system of government was available to the people of Jammu and Kashmir first time in the history of independence.

Further, the Minister said that Government of India has been already working on various flagship programmes aimed at to develop socio-economic status of the people and number of new schemes are also in pipeline.