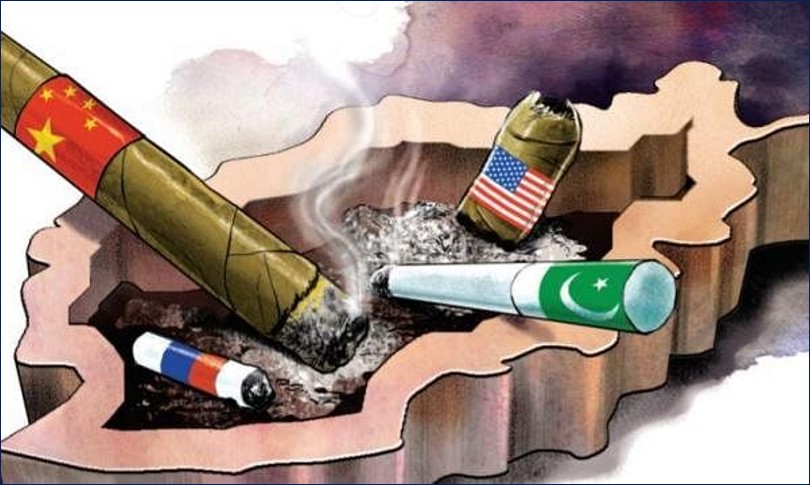 In aggressive China, a regressive US, a vacillating Russia, an overenthusiastic Pakistan, a ‘wait-and-watch’ India and a largely stumped world characterize the international geopolitical environment after the return of the Taliban in its new avatar in Afghanistan. This juncture also coincides with what could be perceived as the tapering phase of the coronavirus pandemic that had its own unique geopolitical impact on the world. In its desire to move away from the Middle East theatre that includes Afghanistan, refocus on the Indo-Pacific and rebuild its preparedness to contest the rise of China, the US may well have dug a hole of instability in the heart of Asia. This may continue to trouble it for longer than we can imagine. A world order in the making in 2020 still had at its center a strong US awaiting transition to a new region of focus to meet future challenges. The difference in 2021 is that the combination of the pandemic, the mishandling of the withdrawal from Afghanistan, and a political and military leadership with a diminished image create a perception of a superpower on the decline. The US has to shake itself out of this perception to enable it to handle the effects of its withdrawal from Afghanistan. It has also to ready itself to simultaneously meet the threats in the Indo-Pacific as well as those of the Middle East and Afghanistan. There is no scope for exclusive focus on a region; by virtue of being a superpower, the US must retain the capability to respond to and calibrate the situations both in the Indo-Pacific and the Middle East, plus the Af-Pak region.

There is a reason for the above belief. Most analysts believe that China is extremely wary of its 22 million Muslim population and the potential of it being radicalised to the extent of posing a threat to China’s internal security and regional stability. A reappraisal of that belief points towards the thought that simmering instability in the region comprising Afghanistan and its neighbourhood may actually accrue strategic advantage to China. It would be confident of handling its own minority Islamic populace through coercive means; it’s been doing this for some years now without any meaningful response from the Islamic nations. Thus, backlash is unlikely. Support to the Taliban in many ways meets China’s intent of also keeping its Belt & Road Initiative on track through the aggregated influence among the various nations in which the infrastructure exists. This is not a coalition of the Confucian and the Islamic civilisations as correctly pointed out by India’s External Affairs Minister S Jaishankar. Rather, it is a tactical convergence of the interests of China with some disparate elements who claim the mantle of Islam; none of the other countries that have majority Muslim populations have such convergence. Pakistan and elements within the Taliban 2.0 would like to be seen as the flagbearers of Islam. For China, the biggest advantage of the above tactical ploy is to keep the US concerned about this region and thus prevent it from making the Indo-Pacific its chief concern. It currently does not have the maritime muscle to contest the US in the Indo-Pacific but hopes that in the course of the next decade and a half, it will be in a position to hold its own more effectively.
The US, which has had a strong relationship with Pakistan due to geostrategic considerations, has mostly displayed reluctance to deal with Islamabad’s rogue behaviour. However, it needs to review its policy in a manner such that it can get Pakistan to act responsibly towards the international community, failing which the nation must be at the receiving end of all actions that have been taken against other rogue states. What the US needs is a Pakistan strategically clearly balanced in its favour and perceiving its interests through that alignment. That is not going to be, as Pakistan perceives that it has the ability to play either way in the competition between the US and China, with each being advantageous to its interests. The US is going to find it difficult to coerce Pakistan in any way except through the route of withholding economic support, but by now Islamabad seems adept at managing its economic affairs in a minimalist way with some support from China. It also appears to be resigning itself towards not finding a special relationship with Saudi Arabia any longer. Yet, things could be changing there too.

Among the geopolitical affairs of the post-Afghanistan period that tend to flummox is the relative silence of Saudi Arabia and the UAE, both countries with major financial clout and influence in the Islamic world. They were among the exclusive three that recognized Taliban 1.0. They have observed with some consternation the role played by Qatar through the crisis and the proactive diplomacy undertaken by it as the intermediary between the US and the Taliban. The power of the Saudis and the Emiratis is far greater and an eventual role for them is inevitable. The worry should be whether that will again come through the route of Pakistan. Saudi Arabia may be unwilling to cede strategic space to Qatar, Turkey or for that matter Iran, which too has played a significant role in the Afghan drama.
Most analyses give Pakistan the advantage in the first phase of post-withdrawal Afghanistan. However, clearly Pakistan remains tenuous in its approach. It has too many directions to look in and is unclear about its own interests. What it aims at is a regime in Kabul largely under its control and completely opposed to any Indian role in Afghanistan. It does not wish to be an American-Saudi proxy in the great game because that combine has Indian interests embedded too while also tilting the balance against the other forces, making a bid for larger influence within the Islamic world. In the midst of all this, Taliban 2.0 may well wish to find its autonomy away from the strings of control of Pakistan. The geopolitics could not be more complex and we may have seen just the tip of the iceberg with much more to come. Pakistan clearly remains the key player and its importance can only be written off at the cost of major risk.