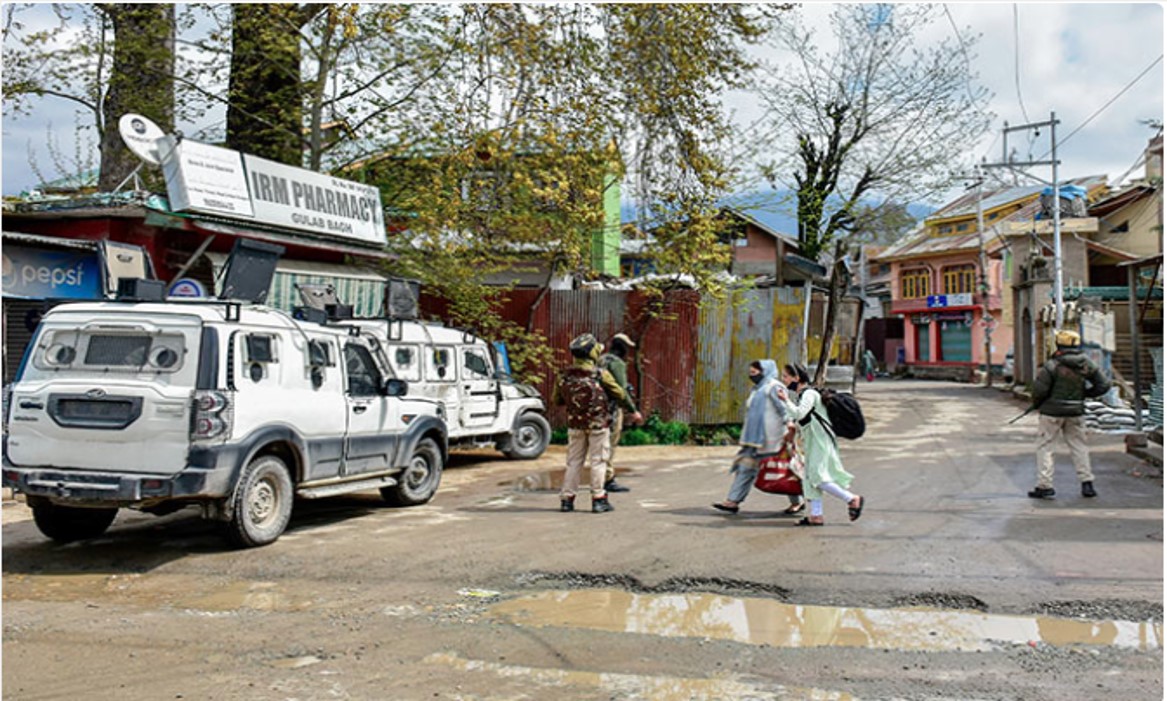 More than two years after the abrogation of Article 370, Kashmir is witnessing a relatively peaceful period. Data on militancy and counterinsurgency depict that the new Kashmir sees a lull in violence, and every index of terrorist violence including net infiltration attempts across the borders, grenade attacks, suicide bombings, and stone pelting, have witnessed a steep fall except strikes involving improvised explosive devices (IED), which showed a marginal growth. Nevertheless, the upshot of this success is being tampered by Pakistan’s new proxy projects designed to revive terror in the valley and hinder the integration of Kashmir into mainstream India. In what officials describe as ‘stable but sensitive’ situation, Kashmir is witnessing a new security challenge in the wake of brutal killings, especially of those belonging to the minority communities, claimed and perpetrated by a relatively new terror outfit, ‘The Resistance Front’ (TRF).

TRF has come into the broader spotlight recently, after it claimed killings of civilians belonging to the minority communities in the first week of October. The outfit has issued a statement threatening that ‘the game has just begun’, and it would ‘strike aggressively’. These developments raised the question as to where does this new outfit position itself in the larger landscape of militancy in Kashmir?

In one of his recent interviews, Chief of Army Staff, General MM Naravane said that he prefers to call TRF as the ‘Terror Revival Front’, citing that the organisation has been floated in times of relative peace and progressive developmental initiatives in Kashmir, such as the rehabilitation policy, de-radicalisation efforts, infrastructure development, and the delimitation exercise. The organisation has been formed post the abrogation of Article 370 and Article 35-A of the Indian Constitution and declared its existence through encrypted messaging app, Telegram, by claiming responsibility for a grenade attack on 12 October 2019, at Srinagar’s Lal Chowk. The attack injured eight civilians, and the arrival of TRF is portrayed as the ‘inception of a new indigenous resistance in Kashmir.’

The Centre’s restrictions on communication after its big move on 5 August, 2019, aimed at strengthening security at all fronts, served as a tactical retreat for militant groups in Kashmir. During this communication blockade by the government, handlers across the borders floated a new outfit using the cadre of Lashkar-e-Taiba (LeT), Hizbul Mujahideen (HM), and other militant groups through ‘Over Ground Workers’ (OGWs). Hence, TRF emerged as a smokescreen and an offshoot of LeT, aimed to give a new face to the Kashmiri cause as ‘homegrown’ and ‘indigenous’. Indeed, TRF isn’t the only outfit created by Pakistan’s deep state that is portraying itself as native born. The People’s Anti-Fascist Force (PAFF), The Joint Kashmir Front (JKF), Kashmir Ghaznavi Force (KGF) are some other terror groups that have come into the limelight recently. Over the past two years, TRF has risen in its prominence as a ‘homegrown movement’ despite the markings of LeT being visible in its activities.

The creation of these new outfits came as Rawalpindi’s attempt to re-strategise its terror outsourcing, once it was clear that Pakistan is not going to be taken out of the grey list by the Financial Action Tasking Force (FATF) any time soon. Mounting international pressure, recognition of several terror outfits, tightened security restricting insurgency, and illegal cross-border activities, forced Inter-Services Intelligence (ISI) to re-strategise. Therefore, the creation of TRF and similar outfits was to provide a cover to Pakistan from the FATF.

In fact, this is also the reason why ISI designed TRF through a divisive strategy, distinctive from other terror outfits in Kashmir. Firstly, the name of the outfit itself attributes to the purpose of its establishment. Pakistan now prefers English titles for its terror proxies, so that such groups can be favorably received by the West unlike their censured jihadist predecessors. Unlike Lashkar-e Taiba which translates to ‘Army of the Pure’ or Hizbul Mujahideen which means ‘Party of Holy Fighters’, TRF’s nomenclature is non-Arabic, non-sectarian, and non-religious, depicting its position as a secular and non-jihadist movement.

Furthermore, restricted cross-border activities created a need for the ISI to consolidate manpower, weaponry, and strength of various proxies locally. Struggling with smuggling weapons or infiltration of men, Pakistan has engaged in ‘soft killings’. Unlike other terror groups in Kashmir that engage in massive violent attacks, TRF has a magnified focus on selective individuals, especially minorities, non-locals, police and security personnel, and domiciled individuals who migrate to Kashmir.

These killings are executed through OGWs, enabling the outfit to conduct attacks without revealing the larger design of its handlers. This new modus operandi is being called as ‘Hybrid Militancy’ by officials, as it involves individuals who aren’t listed in police records, and therefore are off the radar, making them harder to track. Therefore, TRF tries to preserves this strategic advantage by maintaining secrecy of its members, and is dubbed as a ‘faceless force’ and ‘invisible outfit’. Unlike other terror groups, who glorify their memberships through social media, TRF maintains confidentiality of its members to cover the old actors of Pakistan, and provide an indigenous identity to outsourced terror.

This does not mean that the outfit is not active on social media. TRF uses platforms like Twitter, Facebook, and Telegram to issue threats and claim responsibility for its attacks. A very unique attribute of the outfit is how it categorically owns the attacks and provides justifications for each operation. For example, in December 2020, TRF claimed the killing of a jeweler named Satpal Nichal and justified the murder on Facebook for ‘aiding the colonial project in Kashmir and for being an agent of RSS’. In another recent killing, TRF claimed the attack on Makhan Lal Bindroo and justified his killing for ‘posing as a medical professional’ and for ‘organising RSS meets clandestinely’. Through these justifications, TRF portrays to adopt a secularised ideology, emphasising on resistance against invasion, occupation, fascism, and Hindutva as raison d’etre, as opposed to jihad or religious war. This distinctive PR strategy is how TRF paints the picture of representing the interests of Kashmiri citizens against fascist forces, invaders or as it mentions, “stooges”.

All these dynamics point out that the new terror in Kashmir is aimed at impeding efforts made by the Indian government to integrate Kashmir into mainstream India. TRF positions itself as a political resistance force, born in Kashmir and one for Kashmir, against illegal occupational forces, having no centralised jihadi figure or leadership, and is an amalgamation of like-minded nationalists. In doing so, TRF tries to create sectarian divide, ensuring that the terror rank swells with attracting resources, especially recruitment of Kashmiri youth.

TRF positions itself as a political resistance force, born in Kashmir and one for Kashmir, against illegal occupational forces, having no centralised jihadi figure or leadership, and is an amalgamation of like-minded nationalists.

Each of its narratives and propaganda is designed to limit all efforts trying to integrate Kashmir with mainstream India. For example, after its recent attacks, TRF issued a ‘Strategy Note’ declaring that it would single out and thwart any non-local entrepreneurial initiatives and block allotment of domiciled certificates to non-locals. Much before this, on 30 May, 2019, TRF issued a statement saying—“We openly declare that any Indian who comes with the intention to settle in Kashmir will be treated as an agent of RSS and not a civilian, and will be dealt with appropriately.”

With its tagline ‘Resistance till Victory’, TRF operates with a finite objective to resist developments in Kashmir and keeping the Kashmiri cause alive. This depicts ISI’s motives to create a narrative amongst both native and international communities that is sensitive to Pakistan’s interests. This is also necessary for Pakistan’s monopoly of terror in Kashmir, and to counter the disarray within the discredited Hurriyat, the terminal retreat of old outfits like HM, and other competitors like the Islamic State (IS) and Ansar Ghazwat-ul-Hind (al-Qaeda’s affiliate in Kashmir).

TRF is a failed attempt by the ISI to sprout a homegrown movement or secularise Kashmiri militancy. For one, several National Investigation Agency (NIA) modules and counterterror operations by the army busted the role of foreign fighters belonging to organisations like LeT and HM. Further, TRF’s style and manner of attacks clearly outline that the movement is being fought on religious fronts. For example, on 7 October, 2021, the group’s ‘Shaheed Gazi Squad’ shot Supinder Kaur, the Principal of Government boys higher secondary school and a teacher, Deepak Chand, in the Sangam area of Srinagar. The perpetrators asked for identities to separate minorities from Muslims, and both the victims are Hindu and Sikh respectively. It can be argued that ISI presumed that India’s political romanticism with the idea of secularism may win it resources, but clearly, Pakistan has failed to paint such picture on Kashmir’s militancy. Nevertheless, given most Kashmiris’ feel alienated after the abrogation of Article 370, the group may likely attract resources despite its failure to position as indigenous or secular. This new ecosystem in Kashmir creates the likelihood for new outfits to target youth, by making them subjects of sectarian divide and radicalism.