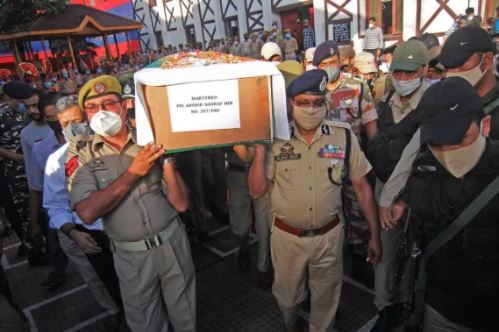 Srinagar- A police officer was shot dead from point-blank range by a militant in Khanyar locality of the city here on Sunday, evoking strong reactions from various quarters, even as Jammu and Kashmir police chief Dilbag Singh said the perpetrators have been identified and will be brought to justice soon.

Probationary Sub-Inspector Arshid Ahmad, a resident of Kupwara district, was shot at after he was coming back from a hospital where he had taken an accused for a check up.

The CCTV footage of the incident shows a militant shooting the officer with a pistol at least twice from behind from a point-blank range in Khanyar, leaving him injured.

The sub-inspector was rushed to SKIMS in Soura, but he succumbed to injuries, officials said.

A wreath-laying ceremony was held at district police lines here in which officials from civil administration, police and other security forces led by the J&K DGP paid floral tributes to the slain officer.

Speaking to reporters, Singh said the perpetrators behind the killing have been identified and will be brought to justice soon.

The DGP said the killing of the young office a very tragic incident.

“We have lost a brave young officer who was just at the threshold of service. He was learning the nuances of policing. He was deputed to a hospital for a check up of an accused and while coming back from the hospital, he was shot.

“He was immediately evacuated to a hospital, but, unfortunately, he succumbed to injuries. It is a very tragic loss for us and the family and we express our condolences,” the DGP said.

Singh said the perpetrators of the crime have been identified and they will be brought to justice.

“Every life lost is a concern for us, whether it is a police or a civilian or a SF (security force) personnel. Those involved in crimes of killing of civilians or SF people (in the past), they have been brought to justice. And in this particular case also, our investigative agencies, our operational teams are working, and soon we will be able to take care of this case,” he said.

Jammu and Kashmir Lieutenant Governor Manoj Sinha condemned the killing and said, “This is a handiwork of enemies of humanity and peace. His supreme sacrifice won’t go in vain, terrorists will be punished for the act. Heartfelt condolences to the martyr’s family.”

“The incident is a grim reminder of the jinxed fate of our region. Such incidents will not further the cause of peace; such dastardly acts of violence will only impede the return of much looked-for peace to the region,” Abdullah said.

He expressed deepest sympathies with the bereaved family and prayed for eternal peace to the departed in the highest echelons of heaven.

“Sorry to hear about the death in the line of duty of Sub Inspector Arshid Mir of @JmuKmrPolice in a dastardly attack in the heart of Srinagar city. A young life with so much promise, another grieving family. May Allah grant Arshid place in Jannat,” he tweeted.

“Saddened to hear about the death of J&K Police Sub Inspector Arshid Ahmed killed by militants at Khanyar today. May his soul rest in peace & condolences to his family, she said.

People’s Conference (PC) also condemned the “dastardly and cowardly” attack on Ahmad. “We extend our heartfelt condolences to the bereaved family. Our thoughts and prayers are with them in this hour of grief,” the PC wrote on Twitter.

SI Arshid Ahmed martyred. May Allah grant him Jannat. The terrorists have yet again made an addition to the army of orphans, Lone said.

Jammu and Kashmir Pradesh Congress Committee (JKPCC) strongly condemned the “ghastly act”, terming it unfortunate, mindless and inhuman. In a statement, the JKPCC said the killing was barbaric and demanded stern action against the killers.

BJP general secretary organization Ashok Koul conveyed deepest condolences to the bereaved family and said such inhumane acts will never be tolerated, demanding that those behind such attacks be identified for stern punishment.