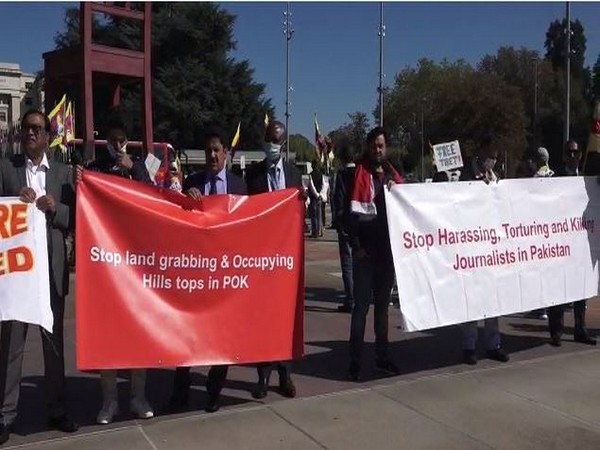 Political activists from Pakistan occupied Kashmir (PoK) and Gilgit Baltistan held a series of protests outside the offices of the UN Human Rights council to demand the dismantling of terror camps and to stop the exploitation of natural resources and land grabbing by Pakistan in the illegally occupied territory.

The protests were jointly organised by United Kashmir People’s National Party (UPNP), Swiss Kashmir Human Rights and Jammu Kashmir International People’s Alliance during the 48th session of the Human Rights council. Exiled PoK leader Sardar Shaukat Ali Kashmiri said, “We are victims of Pakistan’s neo fascism, we are victims of Pakistani terrorism, we are deprived by the Pakistani establishment, our culture is under harassment, our villages are under threat and all those people who raise a voice in favour of human rights are being targeted”.

In a memorandum submitted to the UN, the protestors showed concern that the media and the journalists in Pakistan, PoK and Gilgit Baltistan never had a situation so bad where people fear for the lives of their loved ones. PoK leaders are anxious about the growing land grabbing activities by the Pakistan Army in various towns of the illegally occupied region.

The PoK leaders asked the United Nations to notify Pakistan that the policy of acting as a firefighter and an arsonist at the same time is being totally exposed at the world community, therefore, the country must abandon the old policies of exporting terrorism and learn to live in peace with its neighbouring countries thereby fostering an environment of Peace on the Indian sub-continent.

A protestor from PoK said, “The occupiers should comprehend that this land and resources belong to us, and we will not allow anyone to occupy and use them to advance their business interests”. The protestors also raised the issue of enforced disappearance and torture of political leaders in PoK, Balochistan, Sindh and Khyber Pakhtunkhwa by the Pakistani secret agencies besides mentioning that the Baloch and Sindhis were also facing genocide at the hands of the Pakistani establishment.