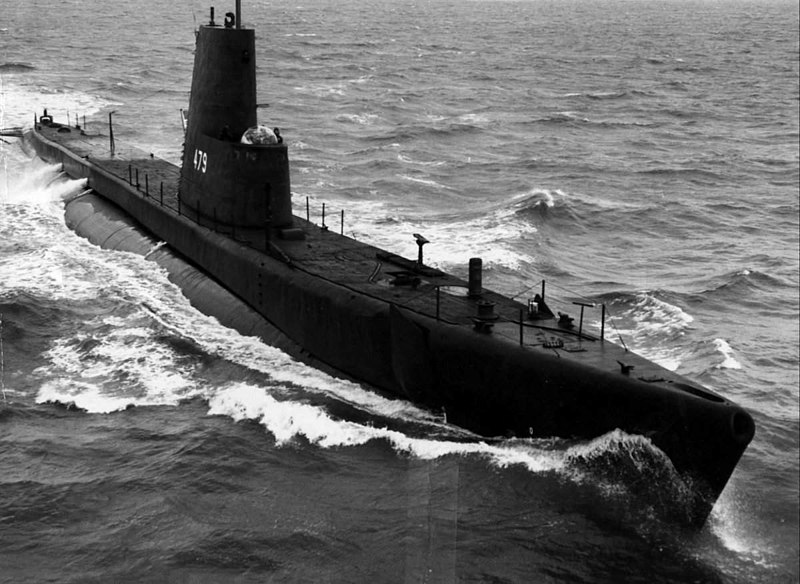 PNS/M Ghazi, formerly USS Diablo, was leased to Pakistan Navy in 1964. It was the first submarine to be inducted in the South Asia region and it had an impressive endurance of 75 days at sea and a phenomenal range of over 11,000 nautical miles. It was the pride of Pakistan’s Navy and had played a pivotal role in the 1965 Indo-Pak war when it effectively blocked a numerically superior Indian Navy fleet in Mumbai harbor, enabling Pakistan Navy to assume control of the North Arabia Sea for unhindered commerce activities into Karachi Port during the conflict.

Six years later in 1971, once again it was tasked around 2,200 nautical miles from home base for yet another deployment of huge strategic impact to mine approaches to Vishakhapatnam (Zone Victor) in order to sink or incapacitate INS Vikrant – Indian Navy’s only aircraft carrier which had been deployed in support of an amphibious landing at Cox’s Bazaar from where Indian troops could carry out a pincer movement and close in on Chittagong. A crack in the boilers of INS Vikrant had reduced its maximum speed to around 16 knots and it would have been a great contest but then fate intervened and it sank mysteriously just outside Vishakhapatnam even before the opening shots of the war were fired.

Mining by a submarine is a dangerous operation especially if the latest survey data on depths and tidal conditions in the zone of operations is not available. It was known to submarine operating authority that underwater maneuvering of a large vessel like Ghazi (over 300 feet long), at slow speeds in restricted waters in unpredictable and strong tidal conditions, and accuracy in the distance apart between laid mines and their axis, posed serious challenges but Ghazi’s crew was proficient to undertake the assigned task, the strategic aim of which was the neutralization of enemy’s seaward pressure on defensive military effort in erstwhile East Pakistan.

The first news and evidence of Ghazi’s misfortune came when some fishermen arrived at the Indian Navy’s Eastern Naval Command Headquarters in Vishakhapatnam with pieces of wreckage and reported an oil slick stretching out from the mouth of the harbor which was subsequently confirmed as the wreck of PNS/M Ghazi. Over three decades later in 2003, ‘India Today’ cited the Indian Navy’s underwater inspection reports of how in death Ghazi teemed with life as marine life of all hues and colors swirled all around it. It was found to be resting on an even keel and its rusted thin outer hull had all but peeled off, exposing the steel skeleton which covered the internal pressure hull and grid of pipes and fittings. The aft escape hatch had been blown open and lay exposed to the sea.

War history can be subjective where victors have all the bragging rights and so it was when India claimed Ghazi’s ‘kill’ without caring that the explosion from an ill-fated submarine was heard all over Vishakhapatnam a few hours before the actual outbreak of the 1971 Indo-Pak war. A detailed account of Ghazi’s unexplained sinking was published in January 1972 in Illustrated Weekly of India – a magazine edited by that indefatigable and independent journalist Khushwant Singh for whom seeking the truth always was ever so important. The report was unambiguous in its conclusion and clearly belied Indian Navy claims about the sinking of a Pakistani submarine.

After hanging on to this falsehood for years, the Indian Navy finally stated the truth after destroying all records pertaining to the incident when its former Naval Chief Admiral Arun Parkash declared in a national security conference in 2011 that Ghazi had sunk under mysterious circumstances and INS Rajput had nothing to do with its sinking. Earlier in 2010, Lieutenant General JFR Jacob, who was serving in Eastern Command in 1971 as a Major General, and had been an accomplice in making this false claim as part of an official record, also set the record straight by stating that Ghazi met an accidental end and Indian Navy had nothing to do with its sinking.

It was Indian Navy’s wartime chief, Admiral S M Nanda, who allowed his Flag Officer Commanding Eastern Command, Vice Admiral Krishnan, to spin the yarn about the involvement of Indian Navy units in the sinking of Ghazi. But intriguingly, while his autobiography dwells at length about all undertakings of the Indian Navy during the 1971 war, he says next to nothing about INS Rajput’s much-publicized depth charge attack on PNS/M Ghazi. But these disclaimers have probably not reached the cinematic community in Bollywood which is used to churning out all kinds of chauvinistic trash using a 50-50 mix of truth and fiction as cheap entertainment for its public.

Its latest production, based on this formula, is about Ghazi’s sinking and obviously, a distraction from the Indian Navy’s glaring shortcomings like the recent sinking of a Kilo Class submarine INS/M Sindurakshak in harbor and capsizing of a guided missiles frigate INS Betwa while undocking. Such incidents are highly unusual anywhere but indeed are in a category of its own for a navy with blue water aspiration. In his exhaustive explanation in the book titled ‘Transition to Triumph’, 1965-1975, published in 2000, by Vice Admiral G M Hiranandani (Retired), he concludes that the truth about Ghazi is unknown to many, suggesting that Indian Navy’s claims of ‘sinking’ Ghazi are totally baseless and false.

What happened to Ghazi remains an enigma even today nearly 45 years after that fateful December night. A widely acknowledged view is that Ghazi sank after inadvertently drifting onto one of her own previously laid mines due to strong monsoon currents that normally prevail in that area. Another theory suggests an explosion of gases built up inside the submarine while its batteries were being charged. The truth about Ghazi’s unfortunate sinking lies somewhere between these different versions. Given the state of India Pakistan relations, that truth is unlikely to ever surface.

Pakistan Navy meanwhile has built a monument in memory of its 93 brave sons who dared to sail a thousand miles and more to the eastern seaboard of India. Their entombed mortal remains in the sunken hull of PNS/M Ghazi are sacred for Pakistan Navy and for every Pakistani citizen. For now, PNS/M Ghazi, as the submariner’s community would like to describe it – is on an eternal patrol in Zone Victor – the last position about four nautical miles east of Dolphin Light in approaches to Vishakhapatnam Harbor.