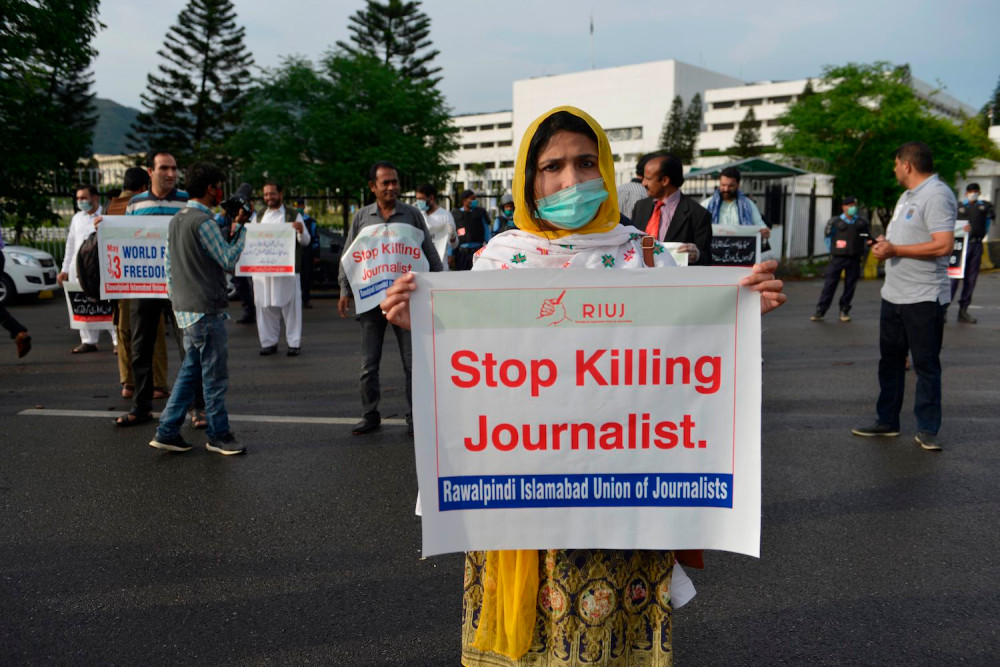 It’s been a turbulent week for the Pakistani press. Last Tuesday, journalist Asad Ali Toor was assaulted in his home. Toor, known for his criticism of the military, said his assailants identified themselves as members of Inter-Services Intelligence (ISI)—a charge the ISI promptly denied. At a protest several days later, television anchor Hamid Mir blamed Pakistan’s armed forces for crackdowns on journalists. On Monday, Mir learned he had been taken off the air.

Pakistan has a vibrant press, with dozens of outlets producing content that often takes shots at elected officials. But criticism of the military and intelligence services is a red line. State intimidation tactics, from withholding advertising revenue to waging hate campaigns on social media, have driven many journalists and their employers to self-censorship. Outlets that have ignored these warnings have mysteriously gone off the air or seen their distribution interrupted.

In Pakistan, journalism can sometimes be a death sentence. Freedom Network, a media watchdog, found 33 journalists were killed for their work between 2013 and 2019 in Pakistan. Although deadly violence against journalists has decreased in recent years, attacks continue, even in relatively safe places such Islamabad, where Toor and another journalist were both assaulted in recent weeks.

Pakistan fares poorly in global press freedom rankings, and since Pakistani Prime Minister Imran Khan took office in 2018, it has fallen six places (to 145) in the Reporters Without Borders World Press Freedom Index. It’s not alone: Elsewhere in the region, India ranks 142 and Bangladesh ranks 152. In these countries, like Pakistan, declining press freedom has played out against a worsening crackdown on dissent that also targets activists, scholars, and nongovernmental organizations.

Attacks against journalists and other government critics are rarely fully investigated, but many observers—including human rights researchers, lawyers, U.S. officials, and some Pakistani journalists themselves—have long suspected Pakistan’s powerful military and intelligence services are behind many of them. State-led campaigns to crush dissent are a regional phenomenon: Indian journalists have been accused of sedition for covering anti-government protests, and Bangladesh has arrested social media users for criticizing the government’s pandemic response.

Pakistan’s political polarization exacerbates the fraught media environment. Liberals and opposition figures lionize anti-establishment journalists such as Toor and Mir, but they are reviled by government supporters. (Some of Toor’s critics have noted his supporters have been silent about his derogatory comments toward Shiffa Yousafzai, a prominent female journalist, earlier this year.) Pro-government voices, especially right-wing nationalists, accuse these journalists of faking attacks for attention or asylum abroad. They also decry how less attention is accorded to journalists attacked for critical coverage of the opposition.

The Pakistani government has used a 2016 cybercrime law as a pretext to target anti-government content online. But a new bill could make the environment even worse for journalists by centralizing government oversight of the media under a single authority and increasing outlets’ dependence on the state. As media analyst Huma Yusuf wrote in a column this week, “What better way to turn media outlets into state mouthpieces than by making them entirely reliant on the government to stay in business?”

During a meeting with then-U.S. President Donald Trump in 2019, Khan said Pakistan boasts “one of the freest presses in the world.” The media oversight bill could become one more powerful data point for those that derided him. In fact, under Khan, Pakistan’s press freedom looks to get even worse.