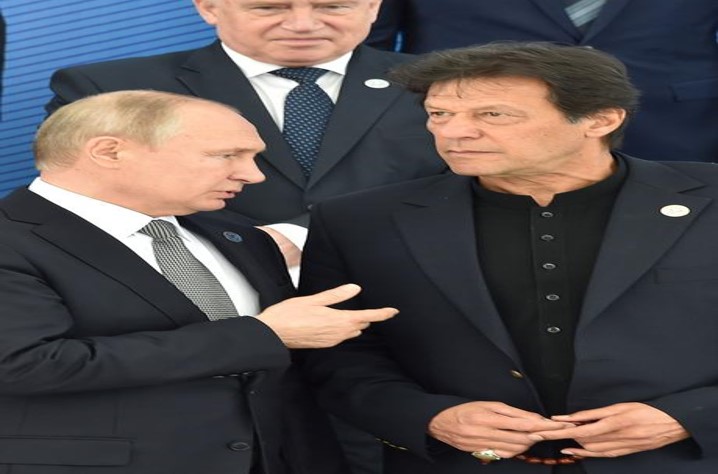 The Afghan Taliban will be affected by Imran Khan’s diplomatic manoeuvres in the Ukraine minefield
Pakistan’s so-called foreign policy independence or neutrality is going to have severe implications for its allies in Kabul. Russia’s invasion of Ukraine has shifted the global focus from Afghanistan. As the refugee crisis in Ukraine gets more acute, the Afghan Taliban will face huge challenges in saving Afghanistan from an economic catastrophe, financial bankruptcy and a humanitarian crisis. A Taliban regime in Kabul has multidimensional, and not just strategic, interests tied to relations with Pakistan. On the other hand, Pakistani policy in Afghanistan is also determined by the rigidity of the strategic commitment, which makes it virtually impossible for Islamabad to give up its obsession of shaping a new political order across the Durand Line.

Impact of Pakistan’s stance
The Afghan Taliban are now going to be affected by the Pakistani Prime Minister’s diplomatic manoeuvres in the Ukraine minefield. First, this will dampen the Taliban’s chances of getting immediate international recognition as Pakistan’s turn towards Russia seems to have further deepened the distrust between Washington and Islamabad. The Western bloc did not take kindly to Mr. Khan’s visit to Moscow last month, which was only seen as justifying Russian President Vladimir Putin’s Ukraine gambit. Triggering an unforeseen chain of events, Mr. Khan’s three-hour-long meeting with Mr. Putin gave the impression that Islamabad was implicitly endorsing Russia’s military action. Clearly, there was little consideration in Islamabad of the diplomatic or strategic implications of this move. The problem of trust deficit between Pakistan and the West can be aggravated further by the rhetoric necessary to mobilise Pakistani public opinion behind any major foreign policy move by Islamabad. The Taliban’s resurgence has also not resulted in the outcome that Pakistan’s military establishment was hoping for, and the delay in getting the Taliban regime recognised internationally will only make Islamabad more frustrated.

Second, the situation in Afghanistan has become complex and uncertain. Afghan people desperately require food, medical supplies and cash. In late February, the Joe Biden administration had decided to ease the pain of the sanctions that had led to the collapse of the Afghan economy. But these measures have not reversed the impact of the U.S.’s prior action of the seizure of half of the frozen $7 billion in Afghan assets. Now Pakistan’s role in the Russia-Ukraine conflict is going to take a toll on Afghanistan and its refugees.

It is clear that Russia’s actions in Ukraine have left Islamabad in a difficult position, one that it may not have anticipated. As the Imran Khan-led hybrid regime has indicated a subtle shift in Pakistan’s diplomatic position towards Russia, Islamabad’s conversation with Europe on the issue of the Taliban’s rehabilitation in the international system will become harder. With more than two million Ukrainian refugees fleeing the conflict zone and taking shelter in various countries in the European Union, Afghan refugees living in Pakistan are likely to receive little from the Western countries.

There is already donor fatigue with regard to the Afghan refugees in Pakistan. Islamabad has its own set of economic problems, many of them self-inflicted. As Pakistan continues to remain in the ‘grey list’ of the Financial Action Task Force, the Paris-based global money laundering and terrorist financing watchdog, it has become difficult for the political leadership to keep the economy stable and fend off the negative implications of an unrecognised Taliban regime in its neighbourhood.

The Taliban’s unexpected victory in Afghanistan has compounded the threat of domestic terrorism in Pakistan, and the state’s incapacity in preventing terror attacks. The ISIS-Khorasan recently claimed responsibility for the suicide terror attack in a Shia mosque in Peshawar, the capital of the Khyber-Pakhtunkhwa province bordering Afghanistan, which killed more than 60 people.

Pakistan hosts around 1.5 million Afghan refugees. Since the Taliban took over in August 2021, approximately 3,00,000 Afghans are said to have fled to Pakistan. As the loss of crucial foreign aid, a severe drought, and a currency crisis have left Afghanistan’s economy in ruins, the Taliban regime is not in a position to take the refugees back from Pakistan.

There are no takers for Islamabad’s spurious claim that it has thus far maintained neutrality — having neither condemned Russia’s military offensive nor having supported the Western alliance position on Ukraine. Given Pakistan’s growing dilemmas, pragmatic voices in the Taliban regime may even demand more autonomy from Pakistan’s Inter-Services Intelligence (ISI) in dealing with the outside world. The ISI is rightly perceived to be the real force behind the Taliban’s military victory over the Western-backed regime. In September last year, Pakistan’s then intelligence chief, Lt. Gen. Faiz Hameed, visited Kabul to influence the Afghan Taliban’s final decisions regarding the interim cabinet that favoured pro-Pakistani figures while preventing Mullah Abdul Ghani Baradar from heading the government. Therefore, any move by the Taliban to act independently of the ISI’s wishes will reduce Islamabad’s overall influence on the foreign policy direction of Afghanistan.

The Taliban Acting Interior Minister, Sirajuddin Haqqani, designated a terrorist by the U.S., recently made a rare public appearance and asked the international community not to view his government as a threat. Emphasising the need for foreign aid to revive the country, Haqqani said that the Taliban are committed to the Doha Agreement signed with the U.S. After all, the Taliban are not oblivious to the fact that neither Russia nor China is capable of pumping in the resources required for rebuilding Afghanistan. As Pakistan is gradually drifting toward a new strategic alignment with Russia and China, the tangible gains for the Taliban-led Afghanistan are still uncertain. But the Taliban are also aware of the structural constraints on any autonomous foreign policy stance. If Islamabad halts its international campaign in support of the Afghan Taliban, Kabul would lose its main foreign backer.

Consequences for Afghans
The changing geopolitical scenario and the increasing alignment between Islamabad and Moscow casts a shadow over the Taliban’s ability to create a more effective Afghan state. The recognition of the Taliban regime is as much about values and principles as it is about geopolitics. Therefore, expectations of an early recognition should now be scaled back and future diplomatic moves undertaken with more care. With the Ukrainian conflict getting worse in Europe, there are also dangers that Afghanistan might be forgotten soon in western capitals. If Afghanistan becomes a lower priority for Europe, its consequences will be severe for Afghans while also eroding Pakistan’s position in Afghan affairs.