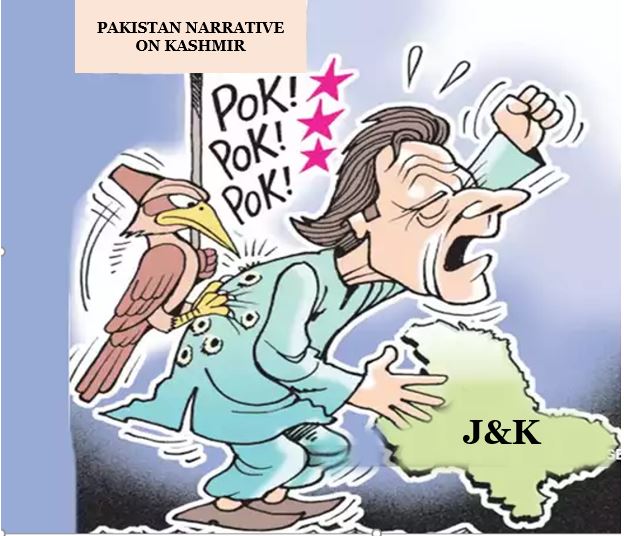 Pakistan Prime Minister Imran Khan has apparently lost his parliamentary majority as more than two dozen of his members of National Assembly have defected to the opposition and a motion of no-confidence has been submitted with the Speaker of the house.
Meanwhile, the two-day (March 22-23) session of the Organisation of Islamic Community (OIC), a 57-member body of Muslim states, has concluded its 48 session in Islamabad. The special invitation extended to China to attend the session has once again echoed China’s expansionist desire.
What better platform would serve the interest of China other than the OIC where China could try to pouch an entire region into its economic trap also known as the debt trap.
However, to invite Mirwaiz Omar Farooq, who is a representative of an Indian separatist organisation from Kashmir called the Huriyat Conference, demonstrates Pakistan’s unwavering commitment to creating chaos and turmoil in Jammu and Kashmir.

In his opening statement, he caused great embarrassment to the dignitaries attending the OIC when Imran Khan began to criticise the OIC for not being taken seriously by the world community. He then started to attack India by accusing her of committing a war crime by settling non-residents in the valley. He told the meeting that according to the Geneva Convention the occupier could not settle outsiders in the land that was under occupation.

Well, well, well. Mister Khan should be given a lesson in history of Jammu and Kashmir. First of all, the State of Jammu and Kashmir came into being after the Anglo-Sikh war of 1845-46 in which the British East India Company decisively defeated the Sikh Empire at the battle of Sobraon on February 10, 1846.

On March 16 of the same year a treaty was signed between the then Maharaja Gulab Singh of Jammu and the British East India Company which transferred the previously Kashmir province of the Sikh Empire to the Maharaja thus was created the state of Jammu and Kashmir that lasted for 101 years until on October 22, 1947 Pakistan attacked the state in order to encroach the state and admit it into the newly established dominion of Pakistan. So here is the first crime to qualify for being charged for war crime and is called ‘War of Aggression.

By attacking the independent state of Jammu and Kashmir Pakistan also committed another wrong that is called Crime against Peace.

And finally when Pakistani troops entered Muzaffarabad they not only looted shops and houses of the Hindus and Sikhs but also began to slaughter them.

Hindus and Sikhs were rounded up in city after city and summary executions were carried on unarmed non-combatant civilian. Women were raped and their private parts cut. This mass murder of 114,000 Hindus and Sikhs was nothing else but a genocide conducted in order to ‘purify’ the land and make it infidel free. In terms of war crimes this tantamount to genocide.

Hence all three conditions that are required in order to charge a country or a community of conducting war crimes are met by Pakistan.

Can we accuse India of the same? Well, quite the contrary. The then Maharaja of Jammu Kashmir Hari Singh had signed an instrument of accession with India on October 26 1947 and invited Indian troops to come and rid the state of invaders.

Today, Jammu and Kashmir and Ladakh are sovereign Indian territories. Pakistan Occupied Jammu and Kashmir (PoJK) and Gilgit-Baltistan (GB) which have been illegally occupied by Pakistan army. Therefore, it is Pakistan and not India that has and continues to commit war crimes by bringing in people from Punjab and the Khyber Pakhtunkhwa into PoJK and GB and settling them in the aforementioned occupied territories which, according to Imran Khan’s own definition, amount to war crime.

Due to the political turmoil and opposition in his own party and across the country Imran Khan also forgot that on March 23 he was supposed to call a national assembly session to declare GB as Pakistan’s fifth provisional province. That dream did not materialise since he fears that if the national assembly sits in session he might be booted out by those who have submitted a vote of no confidence motion against him with the speaker of the National Assembly.

Meanwhile, Imran Khan carries on to confuse the world with his ‘jalebi’ narrative on Kashmir. It is high time that effective and forceful counter narrative is prepared by India and presented to all the OIC member countries and straighten out this Pakistan sponsored jalebi narrative.