Pakistan Tourism: 16 Tourist Spots You Must Visit in Pakistan 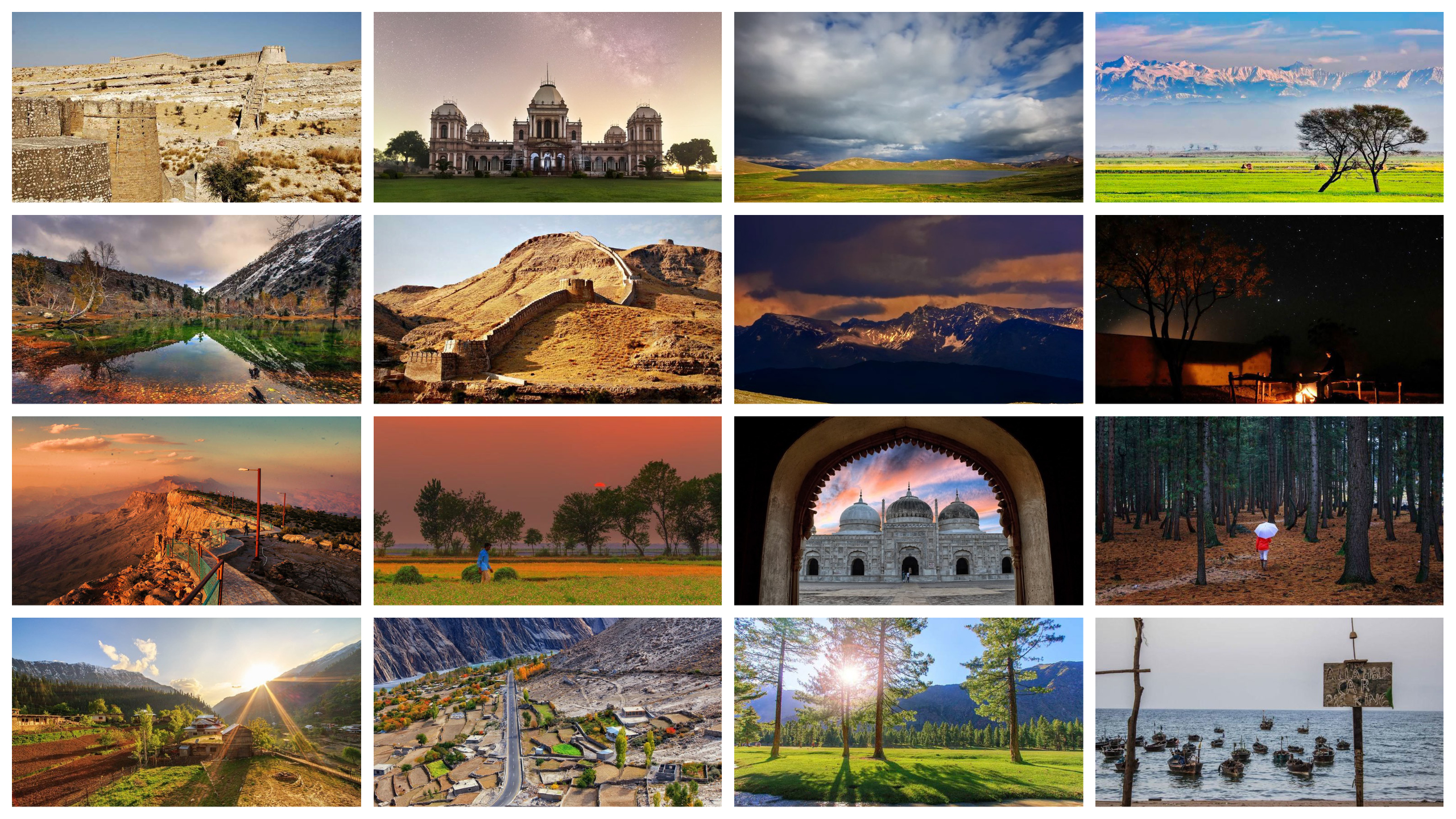 Whenever we think of Pakistan, all that comes to our mind is terrorism, Army, extremism, sectarianism, corruption, load shedding, and inflation but despite all these issues, we immensely love our country. Amidst all the chaos we have forgotten the beauty of our landscape.

Tourism in Pakistan is full of breathtaking locations which will make you fall in love with this country all over again. If you are a tourist or love traveling then you must compile a list of places you plan to visit next year Pakistan. Here are 16 destinations from our list which you must visit. Your experience would be, indeed, unforgettable

Naltar is famous for its colourful lakes, it is situated at a drive of 2.5 hours from Gilgit. World’s tastiest potatoes are cultivated here. Covered with pine trees, this valley doesn’t seem to be a part of this world. If you really want to experience paradise in this world, you should visit Naltar at least once. This place will make you fall in love with it.

Opposite to the Keran sector of Indian-held Kashmir. From the Chella Bandi Bridge – just north of Azaad Kashmir’s capital Muzaffarabad – to Tau Butt, a valley stretches out for 240 kilometers; it is known as the Neelum Valley (literally, the Blue Gem Valley). Neelum is one of the most beautiful valleys of Azaad Kashmir, and it hosts several brooks, freshwater streams, forests, lush green mountains, and a river. Here, you see cataracts falling down the mountains; their milky-white waters flowing over the roads and splashing against the rocks, before commingling with the muddy waters of River Neelum.

In the extreme north of Pakistan, Skardu the central valley of Gilgit-Baltistan is an epitome of beauty, serenity, and wilderness. After Jaglot on the Karakoram Highway, a narrow road turns towards Skardu. During the seven-hour journey, one is greeted with several streams, springs, and the hospitality of the local people. After crossing the old wooden bridge built over the River Indus, one reaches Shangrila, a paradise on earth for tourists. It is a famous tourist spot in Skardu, which is about 25 minutes away by drive. The restaurant in the Shangrila rest house is the highlight of this place, which is built in the structure of an aircraft.

The Gojal Valley borders China and Afghanistan, with its border meeting the Chinese border at Khunjerab – 15,397 feet above sea level – and remains covered with snow all year long. In the northwest, there is Chiporsun, whose border touches the Wakhan region of Afghanistan. Wakhan is about six square miles in area, after which starts Tajikistan. The Karakoram Highway which connects Pakistan to China also passes through Gojal Valley and enters China at Khunjerab.

Deosai is located on the boundary of the Karakoram and the western Himalayas, and at no point, it is less than 4000 meters above sea level. It remains covered with snow for 8 months. The rest of the year, it hosts a range of beautiful flowers of all hues and colours, but not a single tree is found in this plateau spread over 3000 sq km. Sheosar lake is also part of this. This lake is one of the highest lakes in the world. The deep blue water, with snow-covered mountains in the backdrop, and greenery with wildflowers in the foreground offer such a view in summers, that one is left amused for the rest of his life.

Just a little ahead of Rama Village, which is 11 kilometers from Astore, is a beautiful and serene plain called Rama Meadow. If you ever happen to find yourself in plain, ice-cold and milk-white water flowing in streams, sheep and cows grazing in peace, pine trees, Chongra’s ice-covered peak in background, and Nanga Parbat’s southern ridge are in view, then you are probably in Rama Meadow.

Shogran had seen an influx of tourists, who trampled over its beauty, leaving it jaded. Siri Paye, nonetheless, still retains its strong attraction for tourists as a green plateau on top of the Hindu Kush. Engulfed in clouds and fog more often than not, it entices many as a rendezvous which allows one to observe Nature play peek-a-boo. Here, you see numerous small ponds filled with freshwater, meet horse-riders wandering about and smell wild yellow flowers blooming everywhere. With the Makra Peak set as a backdrop, the beauty of the Siri Paye meadows comes to life.

Ayun district is a village of Chitral. Located 12 kilometers south of the city at the confluence of the River Bamburet. There are no words to describe the beauty of the mountains surrounding the village. Beyond Ayun valley is Bamburet Valley, it is one of the three Kalash valleys. Bamburet is a nearly a two-hour journey from Chitral. Locals trace their roots to Alexander the Great and Greece. Bamburet valley is a picturesque valley with lush greenery and mountains that give you a sense of calm and solitude.

White Palace Marghazar is the only breathtaking location in the Swat district that’s situated at a distance of around 12 km from the city of Mingora. Not only do tourists visit Marghazar for its natural beauty and pleasant weather but also to visit the historic White Palace (1941), built during the era of Swat state. After the White Palace was constructed on the directives of the founder of modern Swat state, Miangul Abdul Wadood also known as Badshah Sahab, Marghazar became the capital of Swat state during the summer season. Even today, after seven decades, White Palace remains an attraction for tourists. The Palace doesn’t just look beautiful in summer; even during winter, it remains enchanting especially after a snowfall.

The Kirthar range stretches from Sindh to Balochistan, serving as a natural border between the two provinces. This mountain range includes the scenic Gorakh Hill (5700), Kutte Ji Qabar (6877), and Bandu Ji Qabar (7112). This region is not just known for its breathtaking beauty but also for its rich history. Spread across 150 miles, it is an ideal tourist spot due to several streams, springs and historic locations, however, it’s unfortunate that few tourists prefer to visit. The local population is eager to welcome visitors and want to make this area a better place.

Mubarak remains the second-largest fishermen village in Karachi. Bordering with Gadani (Balochistan), the landscape encircles a stark contrast of golden hills and turquoise clear waters. Away from the city frenzy, this place welcomes you with a lot of love. As soon as you park near the shore, numerous boats are anchored floating on crystal clear waters, beneath the expansive blue sky.

#12. Rural areas near the Punjab river

Punjab has been gifted with countless blessings including fertile land and lush green farms. Nature has also blessed Punjab with colors of every season, as winter ends vivid colors of spring spread around. According to Syed Mehdi Bukhari, Sialkot, a city standing near the banks of River Chenab, is also known as the center of artisans. Perhaps, not only the soils straddling this river but also the people living near its banks owe their fertility to Chenab. Iqbal, Faiz Ahmed Faiz, Shev Kumar Batalvi, and many other fertile minds have their roots here. The River Chenab flows from Marala, 24 kilometers from the city of Sialkot.

Gilgit-Baltistan’s Ghanche district stands almost aloof with its beautiful valleys and settlements inhabited by the most hospitable locals and river irrigated lands. The central location in the district is Khaplu, which is a beautiful landscape with high summits, flowing blue waters, and waterfalls. The people of this small settlement on the bank of River Shyok, are warm and loving, as they were centuries before. Going a little ahead from Khaplu, the curvy road takes one to the delta of River Shyok, where it splits up, flowing through the gravel filled river plain. The peak of Mashabrum mountain can also be seen in the backdrop.

Ranikot, with a circumference of about 26 km, is the largest fort in the world. However, this has not been enough to convince the authorities to develop it as a major tourist attraction. This fort is easily accessible from Karachi through the National Highway. After departing from Karachi, head to Dadu through on the Indus Highway. The road is in excellent condition. It’s an hour-long journey to San, the home of Sindhi nationalist, GM Syed. A little further from the town there comes a diversion. A rusty board announces that Ranikot is some 30 km away. Even though the road is in pathetic condition, the distance can be covered in 30 to 40 minutes.

The princely state in Punjab boasts a treasure of historic buildings, monuments, and parks that many have never heard of. Bahawalpur city located along the left bank of the Sutlej river. Along with desert areas, Bahawalpur is known as the land of lush gardens that soothe your eyes whereas the splendor palaces don’t fail to impress you.

Snowfall in Sindh – sounds more like fantasy but no, there’s one place in Sindh where it really snows in winter, to the extent that in 2008 the mountains got entirely covered with a layer of snow. Gorakh is a scenic plateau situated at a height of over 5,688 feet and is part of the Kirthar Mountain Range that covers the entire Sindh’s border with Balochistan in the west.

Pic Courtesy: Respective owners & travelers who traveled across the length & breadth of Pakistan and shared these beautiful images.