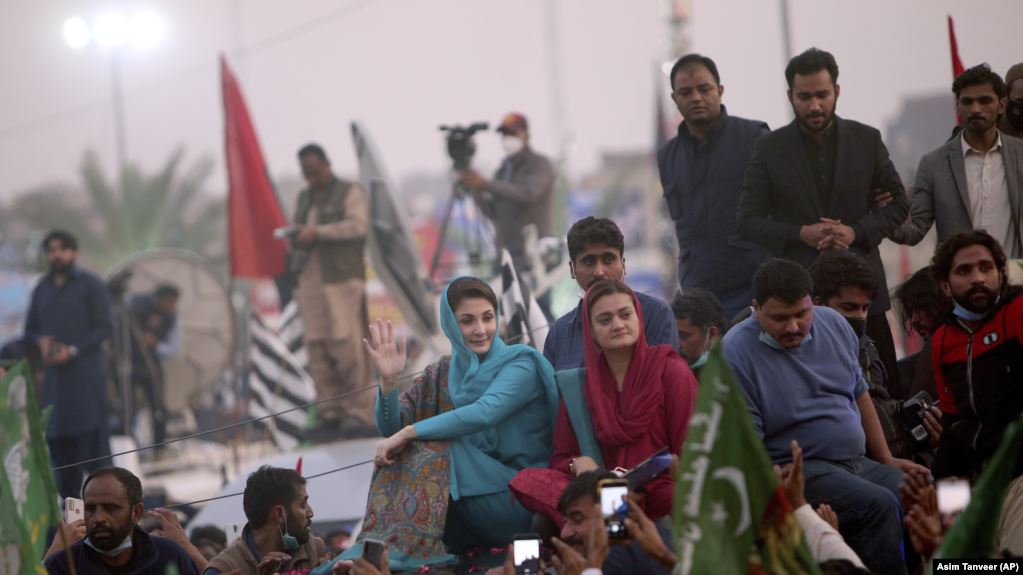 The battle for Pakistan’s political future is heading toward a major showdown in the country’s most populous province, which has historically shied away from confronting Pakistan’s powerful generals, many of whom come from the region. Following up on a defiant rally this week, the Pakistan Democratic Movement, an opposition alliance, is mobilizing supporters in the eastern province of Punjab to showcase its popular appeal at an event in the provincial capital, Lahore, next weekend. considered the nation’s political capital, Lahore as the setting for the December 13 rally might prove a bellwether of where the PDM’s two-month agitation campaign is headed.

A show of popular support in the major city could prompt the generals to bargain with PDM leaders, who blame them for propping up Prime Minister Imran Khan’s government by rigging the parliamentary election in 2018. But in the absence of negotiations, it might also further polarize an already divided country and push PDM leaders to follow up on their threat of marching on Islamabad in January to topple Khan’s government.

Opposition politicians and analysts agree the confrontation in Punjab is the key factor in determining the country’s political future as Pakistanis struggle with runaway inflation and growing authoritarianism amid a second wave of coronavirus infections. Meanwhile, Islamabad is attempting to use the COVID crisis to block the opposition campaign. Senior government figures are attacking PDM leaders relentlessly and accuse them of trying to cover up their own corruption. The military denies any political involvement. Opposition leaders, however, see an opportunity in the apparent failures of the government they accuse of being a puppet of the generals. Pervaiz Rasheed, a key confidant of former Prime Minister Nawaz Sharif, leader of Pakistan Muslim League Nawaz (PML-N), the largest opposition group and the leading party in Punjab, says people in the region are eager to express their disappointment with the government.

“When a political position finds an audience in Lahore, the rest of the country usually follows suit,”. “This is why the December 13 rally will be a practical step toward ending the current government,” he added. “We are considering various options, including a march to Islamabad and shutting down the entire country to force the government to surrender,” he said of the ways that PDM leaders might force Khan to step down. Rasheed, a member of the Pakistani Senate and former broadcasting minister, says most people in Punjab and across Pakistan have accepted the PDM’s prognosis of what afflicts their country. “The people of Pakistan have accepted our perspective about the establishment’s role in politics and the allegations our leaders have leveled regarding their role in the election,” he said, referring to the military by a common euphemism.

Punjab is Pakistan’s industrial and agricultural heartland. With more than 110 million people, it is home to a majority of Pakistan’s estimated 220 million population. This gives the region a lion’s share in national resources and an upper hand in the parliamentary democracy as it holds most of the contested national parliament seats. More significantly, Punjab is the key recruiting ground for the Pakistani military and most of its generals come from the region with a long history of serving.

Chaudhry Manzoor Ahmed, a former lawmaker and leader of the opposition Pakistan Peoples Party (PPP) in Punjab, says that for the first time he is witnessing a widespread dissatisfaction with the security establishment as part of the government’s many failures. “The popular mood here is that of disappointment and anger with the government,”. “This government has not only failed to deliver on its promises but has even disowned them,” he said, alluding to the campaign pledges of Khan’s Pakistan Tehreek-e Insaf political party to end corruption and deliver jobs, prosperity, and improved services. “Punjab is vital. If Punjab moves, it will exert real pressure [on the government],” he said. “That will be crucial for the PDM mobilizing people to march on Islamabad.”

Ahmed rejected the government’s claims that the PDM should abandon its protests because they are contributing to the rapid spread of the coronavirus. “We have no plan to postpone protests. People hate this government more than the coronavirus,” he said. But in Islamabad, Khan accuses PDM leaders of endangering lives by continuing their campaign. “Problem confronting us in Pak during COVID-19 is of a political leadership that has never gone through any democratic struggle, nor worked with ordinary citizens to understand the problems they confront, nor contributed in any substantive way for the betterment of ordinary citizens,” he tweeted last week.

Khan’s administration is keen on showcasing the military’s support and blame corruption as Pakistan’s number one problem. “In fact, not only do these ‘leaders’ lack any empathy with the masses, but their families looted national wealth to further impoverish our masses,” he wrote, repeating accusations that most politicians in his country are corrupt. Khan’s choice for a chief minister or most senior elected government official in Punjab, however, has drawn substantial criticism. Analysts say Khan’s backing of Sardar Usman Buzdar to be the chief executive of Punjab has inadvertently pushed people to support former Chief Minister Shehbaz Sharif, Nawaz Sharif’s younger brother, who is widely credited with implementing vital development schemes and better management. As leading steel magnates, the Sharif family has long championed Punjab’s entrepreneurs.

Afrasiab Khattak, a former lawmaker, and human rights campaigner, says Khan’s failure to deliver has pitted Punjab’s business classes, who have traditionally supported the Sharifs, against the military. “The Punjabi middle and business classes have turned against the intense militarization of society that has turned the country into a failed state,”. “This is why the political battle between the military-installed government and PDM is going to be won in Punjab.” Suleman Khan Kakar, a political analyst in Islamabad, agrees. He says that with a rapid decline in the economy the business and political elites in Punjab have grown increasingly resentful of the military. He says Punjab’s overall share in the national resources shrunk after the 18th constitutional amendment granted considerable autonomy and resources to Pakistan’s three minority provinces. “The overall economic stakes in the country dramatically shrank because of a rapid economic contraction, but the military has its fingers in every pie,”.

The Pakistani military has long been accused of building an expanding economic empire that now has stakes in most sectors and is valued at tens of billions of dollars. “Businessmen and industrialists resent the overarching sway that the military holds over the economy,” he said. “This is the main conflict.”