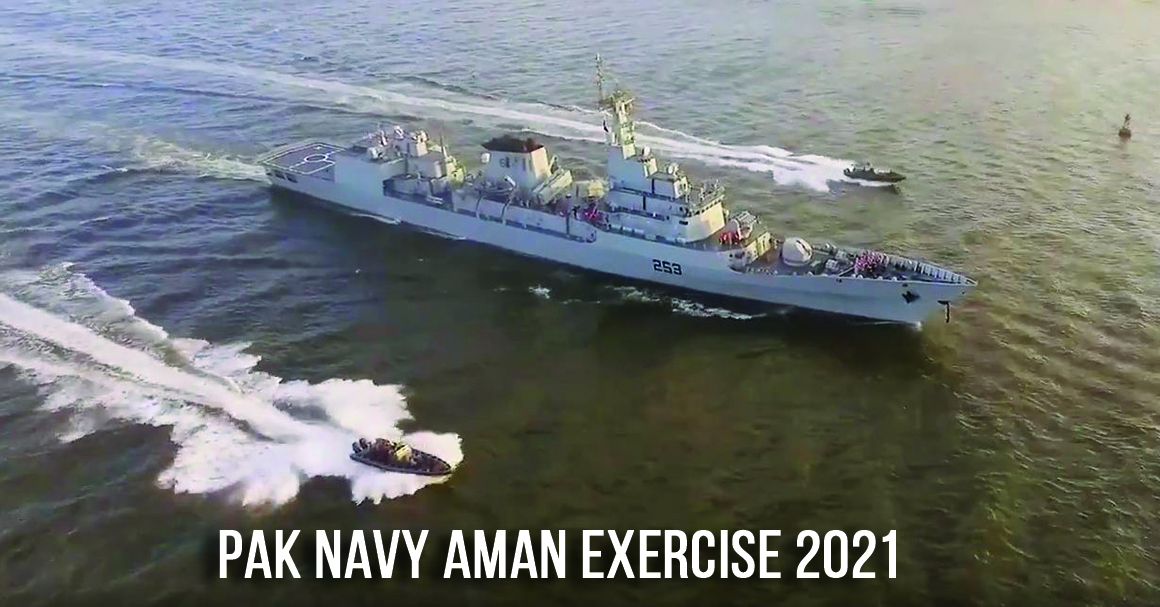 Pakistan Navy organised the “7th edition of the multinational maritime Aman exercise 2021” in Karachi from 11-16th February. 45 countries including the US, Russia, Turkey, China, UK, Iran, Indonesia, Malaysia and other countries from ASEAN, South Asia, African Union, EU, GCC and NATO participated in this year’s Aman exercise. This year’s theme was “together for peace”. According to the official statement, Aman Exercise is one of Pakistan Navy’s mega-events that is held biennially to signify the commitment towards making the seas safer for positive human activities by inviting regional and extra-regional navies for joint exercises.

The exercise was divided into two phases: Harbour phase and Sea Phase. In the harbour phase activities including an international maritime conference on the topic, “Development of Blue Economy under a secure and Sustainable Environment: A shared Future for western Indian Ocean Region” was organised. In the Sea Phase, joint naval exercises took place. The analyst underlined that the latest 2021 naval exercise that concluded on 16 February 2021 was significant for Pakistan and can be termed as a big success as Pakistan was able to bring together countries that are adversaries such as the US and Russia together for this exercise and also the strength of the countries taking part in the exercise has immensely increased. In 2007 when it started, it has only three countries taking part, then by 2019 and now 2021 Aman exercise the number of countries taking part has increased to 45.

On a concluding day, 16th February 2021 President Alvi congratulated Pakistan Navy for successfully organising Aman-2021 and reaffirming Pakistan’s resolve for promoting peace and security in the region. The chief guest also thanked the participating regional and extra-regional navies for displaying their commitment to collaborative maritime security despite the Covid-19 pandemic. Aman ‘21 will pave the way to make the region more peaceful and secure with combined efforts by all stakeholders,” the president stated on the occasion. “Pakistan Navy will continue to play an active role in enhancing regional maritime security individually and in collaboration with partner navies,” said Chief of the Naval Staff Admiral Mohammad Amjad Khan Niazi.